Deep in the Maroon Bells Snowmass Wilderness, resides a formidable alpine environment. Nature here is neither gentle nor kind, dwarfing man with sheer size, and permanence. It is my favorite place in Colorado and easily the most beautiful place I have set eyes on. I'm talking about the spectacular Pierre Lakes Basin.

Capitol Peak from the west ridge of Clark Peak
An obscure 6 mile and 3,600-ft approach up the wickedly rough Bear Creek drainage will get you there. And you will know when you’re finally there, as the yellows, reds, blues, and greens provided by lush and colorful wild flowers surrenders to a world of harshness. Going forward, steel-gray will be the standard color. Beyond the wildflowers resides a vast lake ridden basin bearing an uncanny resemblance to a bleak but beautiful lunar moonscape. The entire basin is 100% encompassed by sweeping serrated ridges that connect towering peaks to one another. In an act of tradition, the fractured and loose ridges constantly drop parts of themselves, adding more and more to this moonscape on a daily basis. Within the bleakness, there is life, usually in the form of Colorado’s state flower, the Columbine- a flower that adores this mineral laden landscape.

On achieving a high knoll, you are positioned for a splendid 360-degree panorama. Soaring high are Clark Peak (13,570-ft) and two fourteener’s, Capitol Peak (14,140-ft) and the awesome Snowmass Mountain complex (14,092-ft). Before you stretch’s the largest of four crystal clear lakes. Through a notch within the toothy ridgeline, soaring red summits of the Maroon Bells provide a perfect contrast to all that is gray. This is an imposing place-a place to remind us of human frailty and insignificance. It’s also a spiritual place in which the intense solitude will grip your memory like a vice. 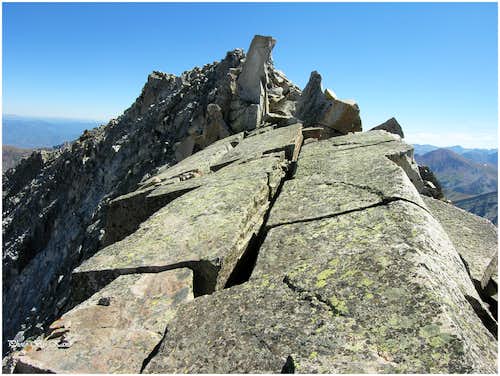 The West Ridge Route on Clark peak
Clark Peak (13,560-ft) was named after mountain navigator Harold Clark of Aspen Colorado, who pioneered many first ascents in the Elk Range. The following is a short historical summery by Dan Mottinger.

Roof of the Rockies by William Bueler

The Elk Range provided the new breed of climber with many challenges during the second phase. The modern mountaineering wave began in 1907 for the Elks. Percy Hagerman and Harold Clark who climbed in the Elks for four consecutive summers started this wave. These years included the first recorded ascents of Capitol, Pyramid, and North Maroon Peaks. Of his climbs, Hagerman found the knife-edge on Capitol Peak the most interesting climb in the Elks.

Its location is first-rate; Clark Peak teams with two of Colorado’s most impressive mountains to protect one of Colorado’s most spectacular places. Residing just one mile east of Capitol Peak and 2 miles north of Snowmass Mountain, all three peaks are connected by a long skinny serrated ridge that encompasses the entire Pierre Lakes Basin. Other notable nearby peaks are Hagerman Peak and Mount Daly. Clark Peak is a bicentennial peak, ranked #200 in Colorado's highest 200.

Clark Peak is approached via Moon Lake Basin. Harboring the similar boulder-infested blueprint as the neighboring Pierre Lakes, Moon Lake Basin shouldn’t be overlooked for its difficult access. More people have heard of Moon Lake than have actually been up there. The lower reaches of West Snowmass Creek (sourced by Moon Lake) are graced with a nice trail, however the portion of route between the huge meadow at 9,800-ft and an obvious headwall just northeast of the lake delivers a bombshell of a surprise. In the meadow, the single-track trail will fade fast. Leaving you with a dreadful, navigational undertaking. It’s easy to get this one wrong, especially on the way up. But, there is a trail, albeit an initially faint one that begins at the very west side of the very south end of the meadow. Locating the trail here is crucial or endure a hideous bushwhack up the drainage, like I did. A bushwhack like that tends to build character, so all will not be lost. Later, I finally located the trail in a meadow at 10,200-ft. Also, the trail peters out in a massive boulder field at 11,200-ft, some 600-ft below the lake. It is here where you begin your boulder-hopping escapade all the way to Clark’s airy summit.

Clark’s west ridge is more solid than it looks. Given the reputation of loose, fractured rock inheriting the Elks, the solid nature of the west ridge surprised me. Festooned with rock pinnacles the exposed ridge requires non-stop class 3 and 4 climbing. The route sees maybe 10 climbers a year so checking every handhold is imperative. Also, the boulder field below Clark’s concave north face isn’t as bad as it looks either. Amid all the boulders resides a lot of boiler slabs making for quick travel.

Overall, the west ridge is a great route and one that I recommend. Be sure to make a minor detour and visit Moon Lake as well. Oh yea, the summit views from Clark are as good as it gets.