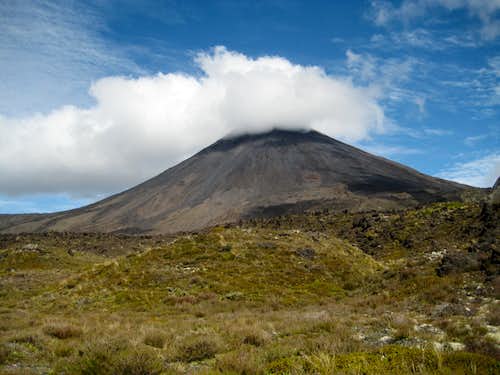 Mt Ngauruhoe from the west. An almost perfect volcanic cone

Viewed from the west, the triptych1 presented by Mts Tongariro, Ngauruhoe and Ruapehu is arguably one of the finest views on New Zealand’s North Island. From this angle Ngauruhoe is the centre of the three principal volcanoes and, together with Tongariro, is located on the southern edge of the Tongariro volcanic plateau.

At a mere 2,500 years old youthful Ngaruhoe is particularly impressive by virtue of its almost perfectly symmetrical single vent cone – in comparison to the shattered multi-peaked facets of its much older neighbours.

These and many lesser summits are to be found in Tongariro National Park, New Zealand’s first (1887) national park and a deserved dual world heritage site. 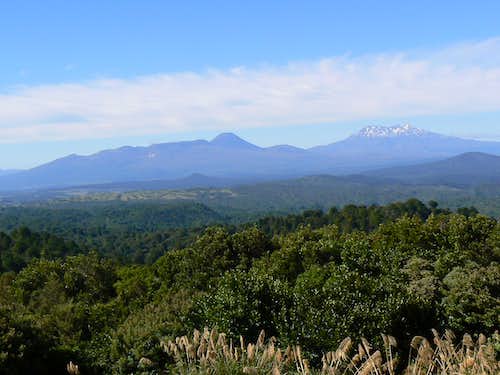 Tongariro, Ngauruhoe & Ruapehu from the west
Ngauruhoe is principally composed of andesite and is classified as a stratavolcano. The mountain is generally regarded as New Zealand's most active volcano, having erupted 45 times in the 20th century, with its last eruption coming in 1977. The most recent eruption in the area, however, occurred in 1996 when Ruapehu woke up long enough to wipe out some of the higher ski lifts on its northern flanks.

At 2,287 metres, Ngauruhoe offers all the usual hazards presented to the aspiring climber. Loose rock in abundance, abrupt and violent changes in the weather, steep snow and ice in winter and early season etc. In addition, fumaroles in the crater can release toxic vapors at any time and, if the wind is blowing from the wrong direction, these may envelop climbers without warning. Be alert to all such hazards. 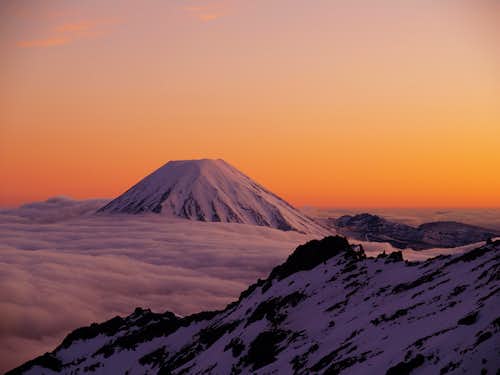 Ngauruhoe from Ruapehu at dawn. Photo by KNEEP
1 Triptych. Amongst other definitions; a three-panelled work of art.

Although it can be approached from SH 1 (The Desert Road) to the east, Ngauruhoe is most easily accessible from the west either as a stand-alone trip, as part of the very popular and crowded Tongariro Crossing or as a side trip on the less popular but still crowded Tongariro Northern Circuit “Great Walk”.

If the weather cooperates, Ngauruhoe offers spectacular views, not only of the volcanic plateau and Mt Ruapehu but as far west as Mt Egmont/Taranaki and north to Lake Taupo. Most people doing the Tongariro Crossing are dropped off at one end and then picked up at the other by one of the dozens of companies that run the production-line like shuttle services from the nearby towns. This allows little time to savour this unique area and even less to admire the views from the top of Ngauruhoe. If a summit is in your plans, therefore, I highly recommend that you do it as part of a stand-alone trip or as a side trip off the Northern Circuit. Give yourself time to linger or, as is often the case, time for the ever present cloud to clear.

It would also be possible to start from Whakapapa village from where the Northern Circuit track meets the track from Mangatepopo Road near the DoC hut of the same name. For day-trippers, however, this would add 4-5 hours to your day. Whakapapa is located at the end of SH 48, 4 km south of the turn off SH 47 to Mangatepopo Road.

From the carpark a well signed and benched track runs east up the valley beside the Mangatepopo Stream. Boardwalk is evident where the track crosses some boggy sections.

About 45 minutes from the start the walker crests a minor rise to one of the boggy areas and is presented with a nice panorama of Tongariro, Ngauruhoe and Pukekaikiore. The saddle between the former pair is your destination and lies directly ahead.

Panorama from the Mangatepopo Track from the NE to the SW: Mt Tongariro, the Mangatepopo Saddle, Mt Ngauruhoe and Mt Pukekaikiore.
After passing the turn off for Soda Springs, the track starts its climb up to the saddle. This section used to be a bit of a chore on loose, broken rock but latterly DoC has spent what must have been millions on a benched gravel path and some really skookum staircases just about all the way to the Mangatepopo Saddle. Not too aesthetic from a wilderness perspective, but this isn’t wilderness and, with the thousands travelling this way every year, erosion was clearly an issue. Certainly the lesser of the evils on offer.

All in all, what with the boardwalk, gravel paths and staircases it’s now less than 2 hours from the carpark to the saddle.

If it’s a fine day – and sometimes if it’s not - there’ll be scores of the laughably under-equipped spandex, jeans and tevas etc brigade around to this point. There was a time when you would leave most of them behind at the saddle. Not so any more. May of the same under-equipped folk are now including Ngaurahoe in their adventure.

If you’re carrying gaiters this is the point to put them on. Likewise, if you’re doing the climb on snow, get out the axe and crampons. 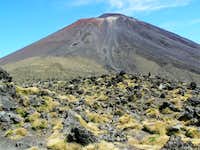 Ngauruhoe from the saddle 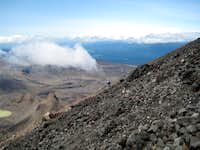 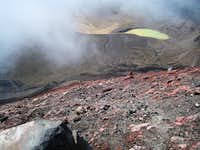 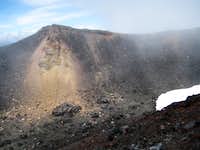 Ngauruhoe true summit
From the Mangatepopo Saddle follow a poled route due south and across an initially gentle incline. The poles continue intermittently but, in reality, and the climber is left with any number of options to continue south to the summit. The best advice I can offer is to aim for the prominent rock rib that punctuates the otherwise featureless scoria and sand slopes around you and climb up this or immediately by its side. The “rock” is loose and sharp but a lot better than fighting your way up 40° sand.

One way of avoiding volcanic unpleasantness, of course, is to climb the mountain when it’s under snow. If you’re contemplating this, and unless it’s sunny and warm and the snow is soft, an axe and crampons should be considered mandatory and knowledge of self arrest likewise. Slope angle is up to 45° at the top and a slip up there would precipitate the unwary climber onto the saddle 600 metres below and somewhat the worse for wear.

Once on the crater rim you can see that Ngauruhoe isn’t quite the perfect cone you looked at on the approach. The rim is open and lower on the south side and there is an additional ridge-like feature above a shallow hanging valley to the southeast. In fact this is the true summit and is about 7 metres higher than the highest point on the rim. Wander over there if you’re a purist. Otherwise the highest point on the rim is marked by a pole and is about 100 metres southeast and then south around the crater edge from where you reached it. 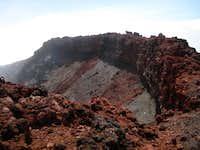 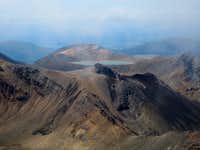 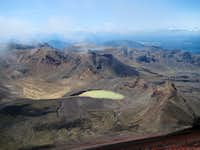 View NE
If you’ve been fortunate with the weather, sit back and admire the stunning and unique panorama below. There is nowhere else quite like this on the planet. If not, peer over the crater rim and down to the gently steaming morass down there. In the cloud and mist it looks more than faintly malevolent – just biding its time awaiting its next bout of bad behaviour.

Descend by reversing the above back to the car park or on around the Northern Circuit etc. Pick your way down through the red band and veer across to descender's right as you near its lower limit and the beginning of the rock rib. To the right of the rib lies friendly deep sand that offers a pleasant descent as far as the initial easy slopes above the saddle. It’s a scant hour back to the saddle and 7-8 hours return from cars including breaks and an hour on the summit. All that sand you avoided on the way up makes for a fast and comfortable descent but you’ll be glad of the gaiters!

Panorama of the northeastern part of the Tongariro Northern Crossing with Mt Tongariro on the left. Taken from high on Mt Ngauruhoe.

As a day trip there is no red tape; neither if you’re doing it as part of the Northern Crossing. The locals make their money out of transport costs rather than track fees. If you’re travelling the Northern Circuit, this is a “Great Walk” and subject to the considerable hut costs that DoC levy for these things.

DoC operates a well-organised intentions system. Particularly if you’re travelling alone, you’d be well advised to complete one of the forms available at the trailhead or at the Whakapapa office.

I regret that I did not check for cellular service anywhere on this trip. Perhaps someone else could comment on availability or not.

The nearest place to stay to the Mangatepopo trailhead is Whakapapa village. This does tend to be rather expensive but is a unique and usefully central place if you’re contemplating several objectives in the area.

The ubiquitous – but not that cheap in this case – “Backpackers” style accommodation is available from Skotel Alpine Resort. They also offer normal motel and hotel units.

If you’re feeling flush and deserving of a treat, head for the historic Chateau Tongariro.

Otherwise, it’s no great distance to National Park or Turangi. Clicking on these two links will take you directly to a list of hotels, motels, lodges and campgrounds for these two towns.

A tour through the pertinent DoC websites would be prudent, not to mention interesting, before a trip to Ngauruhoe and its neighbours. You will find such links embedded throughout the text above.

Be sure to check out the NZ Metservice alpine forecast for the National Park before heading up. Otherwise, get a direct view of the weather on the volcanoes right now from Geonet’s webcams 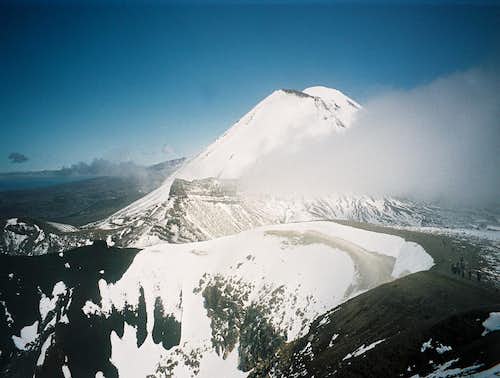 Mt Ngaurahoe from Red Crater to the NE