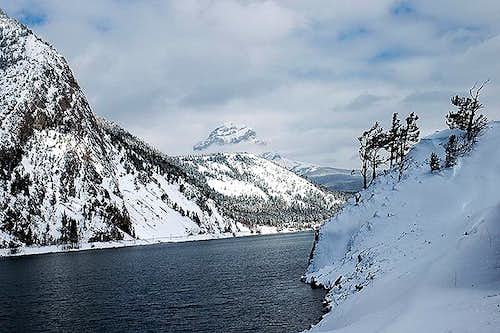 While driving through the Crowsnest Pass in southern Alberta, there would be few mountains one could consider more distinctive or picturesque than Crownest Mountain. Its distinctiveness is only partly due to its steep flanks and the fact that it is the highest peak in the sweep of mountains surrounding the town of Coleman. What truly makes Crowsnest Mountain so impressive is the fact that, when viewed from the south, it stands completely alone from any other mountains. Only when it is being stood upon can you see that its only close neighbor is Seven Sisters Mountain to the north.

Crowsnest Mountain is located just north of the #3 highway (aka Crowsnest Highway) in the Crowsnest River Valley between Allison Creek Valley and McGillivary Creek Valley. It lies just east of the High Rock Range, which marks both the Continental Divide and the Alberta/British Columbia border.

Loose Scree and Great Views of the Seven Sisters

There are two stories explaining the naming of Crowsnest Mountain. The less circulated theory is that the name came from a slaughter of Crow Indians at the hands of the Blackfoot Indians near the present town of Frank. The slaughter is said to have involved the corralling of the Crow Indians into a “nest.” The generally more accepted story is that George M. Dawson, a surveyor for the Geological Survey of Canada in 1883-1884, had observed that the pass, river, and mountain were named by the Cree Indians for the ravens which nested in the area. However, an improper translation made the name of the mountain Crowsnest instead of Ravensnest.

The first ascent of Crowsnest Mountain occurred on July 28, 1904 by Tom Wilson and Swiss guides Christian Hasler and Friedrich Michel. The men had been sent to Crowsnest Mountain by none other than Edward Whymper, who was in the Crowsnest Pass area in 1903 and again in 1904 on behalf of the CPR. Wilson, Hasler, and Michel were to do a reconnaissance mission of the mountain, establishing a trail around the mountain, examining the features of the mountain, and reporting back to Whymper with their observations.

However, after establishing camp on the west side of the mountain, the men succumbed to temptation and summitted the mountain two days after. Tom Wilson telegrammed Whymper on July 29 with the news "Flag on Crows Nest Mountain. Waiting orders." Whymper was displeased by the news, however, historical accounts vary as to the reason why. While some historians say that Whymper’s dissatisfaction stemmed from the fact that his orders were disobeyed, a Banff newspaper quoted Whymper as saying "I feel much chagrined, the moreso as it was my own men who got there ahead of me."

The current scramble route was first ascended in 1915.

Crowsnest Mountain is a klippe of the Lewis Thrust Sheet. Although it is in the same general vicinity, the rock at Crowsnest Mountain is much younger than that of another well known klippe, Chief Mountain. Crowsnest Mountain also has the unique feature of having older rock at its top sitting upon younger rock at its base. The mountain is comprised of limestones dating back to the Devonian and early Carboniferous eras (the Palliser, Banff, and Livingstone formations) resting on top of late Cretaceous rock of the Belly River Formation. The older, upper rock (which was once connected to the High Rock Range to the west) was pushed over the younger rock which now comprises the base of Crowsnest Mountain. Over time, streams eroded around all sides of the mountain leaving it standing alone as it is today.

As Crowsnest Mountain is not within any park boundaries, there is no red tape involved to climb it. Just park and climb!

The season for climbing Crowsnest Mountain is June through September. The warm chinook winds of the region normally have the mountain climbable by June, however, lingering snow patches can potentially make this scramble much more difficult. If attempting in June, I would recommend bringing an ice axe, as the snow can be quite hard and very difficult to kick steps into. 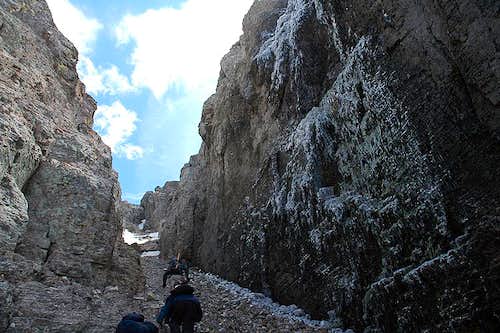 The opportunities for camping in this area are too numerous to mention. Here is a link for some of the campsite possibilities in the Crowsnest Pass.

There is camping at Allison Lake and Chinook Lake. Just follow the signs on the Allison Creek Road when you turn off the number 3 highway toward the trailhead.

There also is ample accommodations to be found in the communities of the Crowsnest Pass – Bellevue, Hillcrest, Frank, Blairmore, and Coleman.

Windy conditions are virtually a constant in the Crowsnest Pass area.

For the rest of the weather story:
Crowsnest Pass Weather

Because Crowsnest Pass is not within the boundaries of any park, there is not currently a contact for trail conditions, etc. Feel free to send me a private message and I may be able to contact people I know who live in the vicinity of Crowsnest Mountain to see if they have any knowledge of the current conditions.

Road Watch in the Pass
A project giving you the opportunity to report sightings of wildlife crossing Highway 3. The goal of this project is to collect, analyze and communicate information concerning crossing locations of wildlife along the highway.