Mount Huntington is one of the most aesthetically pleasing mountains in the Alaskan range. Located approximately 15 kilometers southeast of Denali between the W. Fork of the Ruth and Tokositna Glaciers, Huntington prominently rises above its nearest neighbors. Now justly considered a classic climb and well within the range of mid-technically skilled climbers, it is almost a surprise that such a summit remained unclimbed until the mid 1960s. The French climber Lionel Terray led an expedition to the Alaskan range in the spring of 1964 hoping to make a first ascent of the Moose’s Tooth. Upon discovering that a German team (Welsch-Bierl-Hasenkopf-Reichegger) was already in stage to make the Moose’s Tooth’s first ascent, Terray decided to instead take his team to climb neighboring Huntington. In expedition style, the French climbers (Batkin-Bernezat-Gendre-Gicquel-Martinetti-Sarthou-Soubis-Terray) subsequently climbed and made the first ascent of Huntington via W. Ridge (commonly now referred to as the French ridge). 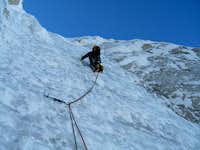 Although the prominent arete separating the West Face and the Phantom was the line of the second ascent in 1965 (Harvard Route, Bernd-Hale-Jensen-Roberts), the French Ridge, not lacking in substantial objective hazard, remained a standard route for twenty years until new focus was placed on the West Face. The West Face Couloir was the target of much of this focus and the route was first climbed as early as 1978 (Evans-Hogan) without reaching the summit. Not until 1989 Nettle and Quirk reached the summit of Huntington via the West Face Couloir and (controversially) claimed a first ascent. Regardless to the controversy, the West Face Couloir has since become the most commonly attempted route to the summit of Huntington with several parties establishing camp on the E. Fork of the Tokositna Glacier each spring hoping for a suitable weather window and chance at the climb. 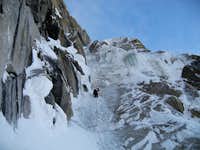 FA: 1978, Evans-Hogan
grade V
WI4-5, 85-degree ice
approached from the E. Fork Tokositna
Although not the least technical route (that would be the French Ridge), the WF Couloir is currently among the most frequently climbed routes on Huntington.

This is one of the most prominent lines in the entire range, comparable in length and difficulty with the Moonflower buttress. As seen from the Harvard route, the Phantom wall is quite impressive, well deserving of its name. Thus far the 7,000 ft wall has seen only 2 ascents: Smith-Teare 1991 and “Shi-Shi” by Ichimura-Yokoyama 2005. 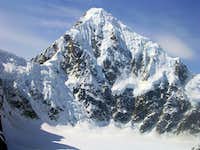 FA: 1979, McCartney-Roberts
All routes on the north side are infrequency climbed due to high objective danger.
approached from the W. Fork Ruth Glacier


For more detailed information and history on these and additional routes on Huntington, please refer to AAJ 2006 and Alpinist 20.

Getting There, Camping, and Weather

Two commercial aviation companies offer climber support out of Talkeetna, AK:
Talkeetna Air Taxi: http://www.talkeetnaair.com/ or 800-533-2219
K2: http://www.flyk2.com/ or 800-764-2291
In the experience of this climbers (physics), K2 aviation predominately flys tourists on sight-seeing trips along with feryboating hikers to Denali basecamp. Talkeetna Air Taxi is the choice company for climbers. While the level of organizational skills and aptitude possessed by administrative assistants who run TAT is debatable, TAT has excellent pilots who can safely land climbers into tough, tight places - especially Washington native pilot Rico who is one of the top pilots among those who fly in and out of the Alaskan range. 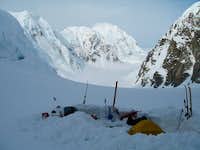 For routes on the West Face, the landing strip on the E. Fork of the Tok is located just near the base of the climb. Climbers will be asked to camp in the same locale as previous climbers in order to prevent snow potholes from tents forming the around the runways. From such a camp, routes on the West Face are generally reachable in <1 hr approach and the base of the French ridge in 10 mins.

Whereas the nearby Ruth Glacier, sometimes referred to as the Banana Belt of the Alaskan Range, has much more stable weather, the E. Fork of the Tok is notorious for bad weather patterns. It is not uncommon for parties to be tent bound for long periods of time waiting for bad weather to pass. When we (physics and travelin_light) were there in April-May 2007, we spent 9 straight days confined to our tent waiting out poor weather. Upon return, we realized that such stories from climber on the Tok are not uncommon.

Climbers are required to register with the National Park Service prior and subsequent to all expeditions. A $10 permit is required for anyone entering Denali National Park. Additionally, climbers making camp near landing strips are required to use human waste containers, available for free from the NPS in Talkeetna.