Gash Point is a little known and little used "highpoint" in the Bitterroot Mountains to the west of Victor, Montana. The trail is not maintained by the Forest Service, and in fact, looks to have had very little maintenance for quite some time. My guess is that only those with an interest in reaching Gash Point ever use the trail. Okay, maybe a hunter or two, but I saw little sign of any game bigger than a chipmunk or two. BLAM!

Gash Point is one of the Bitterroot's most visited back-county ski destinations and has some of the best back-country skiing available in the area.

Gash Creek, and, eventually Gash Point, were named after Jim Gash who lived for a while along the creek during the early 1870s.

"Ma" Gash moved her family to Stevensville, Montana, from Utah during the early 1870s. Her family consisted of two grown sons, Ad and Jim, and a daughter Gina. Ad was an considered an "okay guy", but the rest of the family, well they were "hard." By the time the family moved to a log cabin on what is now Gash Creek west of Victor, Gina had married Bill Brown – yes, the same Bill Brown who ran a saloon in Stevensville and had already been involved in at least one "shooting incident."

Not long after the Gashes arrived in the Bitterroot Valley local ranchers began losing horses. Known to run with many of the area's shady characters, the Gashes were prime suspects. In those days, stealing horses was considered more heinous than murder. So it should come as no surprise the Gashes were not held in high esteem by respectable citizens.

The Gash Gang often drove their stolen herds through the Big Hole and on to Utah for sale. During one return trip, the gang came upon a Mr. Goodwin pulling a wagon load of supplies with a matched team of bay horses. They killed Goodwin, dumped his body in the river, then sold his supplies in Silver Bow before returning to the Bitterroot Valley with Goodwin's wagon and prized horses.

When the gang arrived home, the wagon and horses were quickly recognized. A group of lawmen backtracked the Gash Gang's trail and discovered Goodwin's body in the Snake River. The Missoula County Sheriff, William Lyons, and a few deputies entered the Bitterroot Valley to arrest the guilty parties. Getting the "drop" on Jim Gash and Pete Matt at the Gash cabin, the two outlaws were arrested and taken to the jail in Missoula.

A few days later brother Ad, taking along a bag of apples, went to visit Jim in jail. Later that evening, using the gun concealed in the bag, Jim seriously injured the sheriff and escaped. Jim and Ad spent that winter of 1873-74 hiding in a small cave up Blodgett Canyon. Surviving on provisions supplied by family members and other gang members, Jim and Ad waited until spring before leaving the Bitterroot Valley forever.

The fire had been determined to be human caused and was under investigation until early September when a Bitterroot Valley youth was arrested for starting this and several other fires during 2006.

The fire was easily visible from many points in the Bitterroot Valley and was at times rather spectacular. This was especially true one night when a huge abandoned slash pile near the Glen Lake Trailhead ignited. As this took place in a shallow cirque, after dark that night, the mountain had the look of an active volcano.

Impact of the 2006 Gash Creek Fire

Amazingly enough, the 8,500 acre fire seems to have improved the route to Gash Point, at least in my opinion.

Granted, a lot of trees and other plants have been killed or damaged, but many more survived and will likely flourish with the lessening of competition. The "look" of the area has certainly changed, but to state categorically that "things are worse" is taking a short-term view. Things always "change", something which is not necessarily bad.

On October 7, 2006, when I visited, animals were already returning to the area. Rodents and birds were in abundance, and the ungulates had re-established their trails. Interestingly, humans seem to feel more threatened by wildfires than the "animal" inhabitants.

Anyway, with the burning of some of the dense undergrowth which had previously choked the area around Gash Point, it is now easier to reach the summit unmolested by twigs and branches. I, for one, am grateful for the easier passage and willing to put up with a bit of soot for the next couple of years. I know many burned trees will be falling on the route in the near future, but I doubt their number will exceed the amount of deadfall which had cluttered the ground before the fire.

From US Highway 93 go west on Bear Creek (about 3 miles south of Victor) for 2.3 miles to where it "tees" into Red Crow Road.

Turn Right (north) onto Red Crow Road and follow it for about 2 miles.

Turn left (west) onto Pleasant View Drive and follow it as it makes several right and left 90 degree turns. After about 1.5 miles it turns into a good gravel road.

Stay on the main road as you pass several private residences and other turns off. When you have gone about 2.25 miles from the point the road turned to gravel, you will come to a junction. Currently it is not marked. The road going to your left (west) is FR 1325, but you want to go straight ahead (north) onto FR 737.

About 5 miles from the junction, you will see an old sign on the right side of the road indicating you are now on FR 13101. At this point the road gets a little rougher but is still easily passable by a passenger car.

Follow the road as it proceeds first upward then slightly downhill for about 1.7 miles past the FR 13101 sign. Look sharp in a left-turning switchback for a trail leading to your right (west). That is the trailhead for Gash Point.

This wide space in the road has only enough parking for a car or two, but that should be plenty given the low use of this trail.

Within a couple hundred yards of the trailhead, the route goes into designated Wilderness. So be advised that all "Wilderness Rules" apply. No chainsaws!

Wilderness Rules apply to camping in this area, but I saw no good sites along the route I used.

October 8, 2006 Update - The Gash Creek Fire this past summer really opened up this entire area. The woods is no longer so thick it blocks satellite signals to GPS units. And much of the underbrush has been burned away. It should be much more difficult to get lost on the return trip from the summit, though I suppose it is still possible if you're not paying attention.

Hiking is comparatively easy for the first mile, then the trail seems to disappear altogether. Supposedly there are infrequent blazes marking the trail, but I couldn't find them. So I bushwhacked. Looking at a topo map reveals that a good route to Gash Point is mostly along or close to a ridgeline. I moved uphill north-northwest until I was close to the ridgeline then began traversing/bushwhacking through the not-too-thick woods in a generally northwest direction. Periodically I ran across sections of trail, faint though they were.

At around 8,000' (about 2.25 miles from the trailhead) the woods began changing from a mix of fir and lodgepole pine to a mix of whitebark pine and larch. It also thinned considerably and at this point the route to Gash Point becomes obvious. Gash Point is toward the north end of a fairly long ridgeline. Looking at this ridge from most points on the trail as you pass 8,000', you believe the high point is on your left (the southern end of the ridgeline). It's an optical illusion. Prove it by studying your topo map (which you should have with you).

As you proceed upward, stay close to the top of the ridge you are ascending and head for an obvious saddle in the Gash Point Ridge. As you approach more closely to the saddle, the high point of the ridge, which will be to your right (north) becomes more apparent. Once you are confident you recognize the true Gash Point, pick your trail. Either scramble over the rocky north-south ridgeline, or avoid climbing by skirting the outcropping on its east side. The summit is marked with a brass survey marker. Enjoy!

The is no water along this route once you head uphill away from Gash Creek, so bring plenty of liquid. The round trip is under 7 miles. So, even with a little exploring near the summit, you probably won't need to carry much to eat. Otherwise, come equipped with the "normal" hiking gear.

There are some pretty interesting rock outcroppings near the summit. If you plan to climb them, bring the equipment you expect, or think you might want, to use.

As the trail is non-existent for much of its route, it is difficult to ski or snowshoe unless the snow cover is rather heavy. That being said, plenty of back-country skiers "skin" up the ridge each winter (and early spring). Obviously enough snow falls to cover the "junk" on the ground. 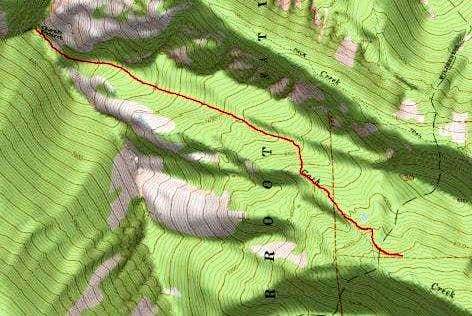