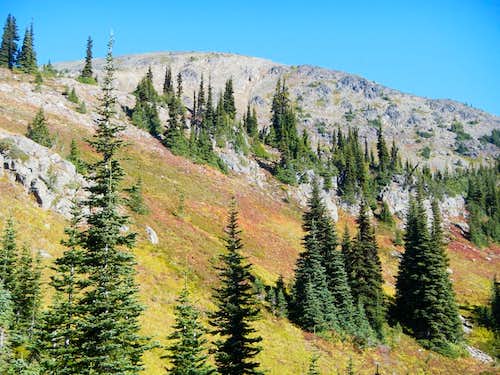 Mount Outram is the highest Cascade Range peak north of Highway 3 (Crowsnest Highway) on the border of Manning Park, British Columbia.  It is part of the Hozomeen Range which is a subgroup of the North Cascades.  With over 1000 meters of prominence, it is the crowning point of it's group of peaks which includes Mount Manson, Johnson Peak, Mount Hatfield, MacLeod Peak, and Mount Jarvis.

Summit Panorama East
There are two summits, the northern most one being slightly higher than the southern.  Most hikers stop at the southern false summit because the rock quality is not the best.  As of September 2016, there were summit registers located at both points.  The scramble to the summit passes through two notches, over an intermediate crag.  It is mainly class 2 with minor minor exposure, however it could be more hazardous if snow is present. 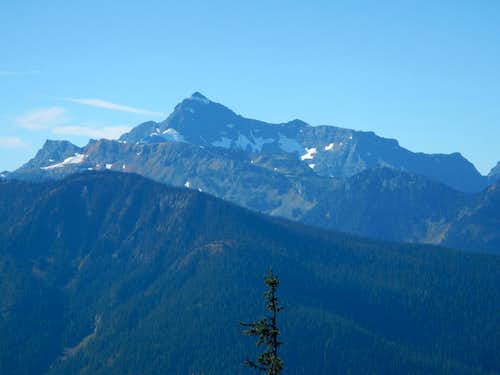 Nearby Silvertip Mountain
This peak involves 1800 meters of elevation gain and 20 kilometers round trip.  It might be too much for a single day unless you are in excellent condition.  Fortunately, near where the trail ends there are several small lakes which would make for pleasant camping.  One lake is very near the trail and another larger lake (visible on the map) is further east but appears easy to access.  This other lake would offer extreme seclusion. 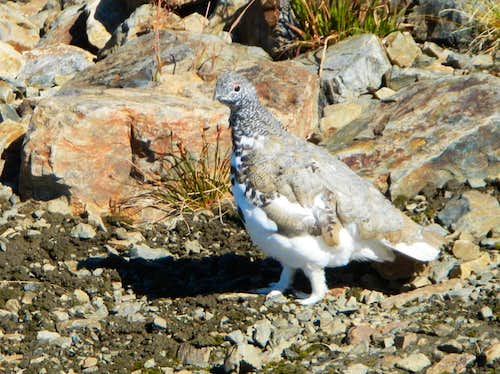 Ptarmigan On the Upper Slopes

The hike takes you through varied terrain ranging from thick, lush forests, to open meadows blanketed with wildflowers and heather, to barren rocky terrain and ending in a class 2 slightly exposed summit scramble.  The best views from the summit are to the south where some of the craggiest peaks of the Cascade Range are located, some of which are across the international border in Washington State.  The main peaks visible on a clear day include; Hozomeen, Black, Crater, Jack, Silverstar, Azurite, Ballard, Goode, Logan, Buckner, Boston, Forbidden, Eldorado, Prophet, Spickard, Rahm, Shuksan, Baker, Rexford, Larrabee, Slesse, American Border, Crossover, Macfarlane, Silvertip, Rideout, Sumallo, and Payne.

Take the Trans Canada Highway 1 to the town of Hope.  From Hope go East on Highway 5 for a short distance to the junction with Highway 3.  Take Highway 3 (Crowsnest Highway) Hope/Princeton Highway for 18.5 km until you come to the entrance of Manning Park and park at the Huge Marmot statue alongside the highway.  The trail and peak are not inside the park but alongside the border. Below is a Google Map of the parking area. 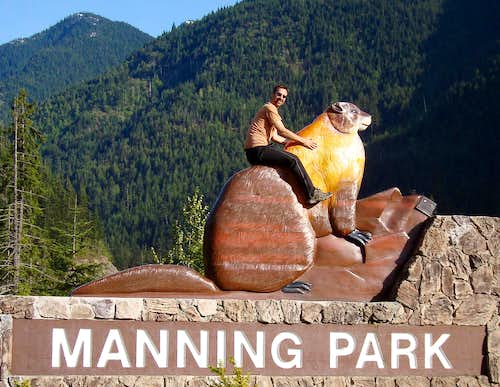 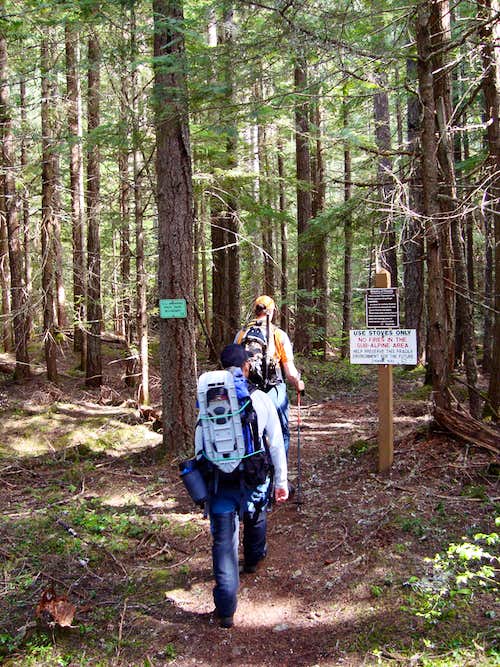 Hike through the Forest

Follow the signage form the trailhead with the large Marmot to the Engineer's road. Follow this well constructed (and in amazingly good condition) road east for just under 1 km. 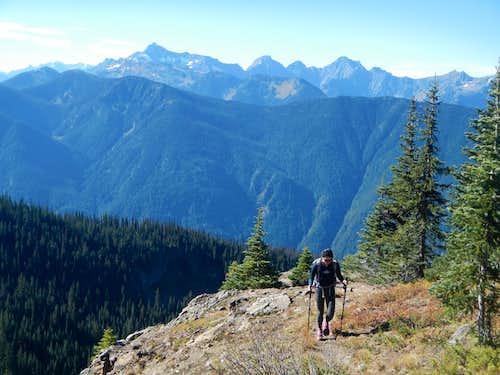 Mount Outram Trail
Turn north at a signed intersection and follow the trail up trough dense forest and over many switchbacks for several kilometers. 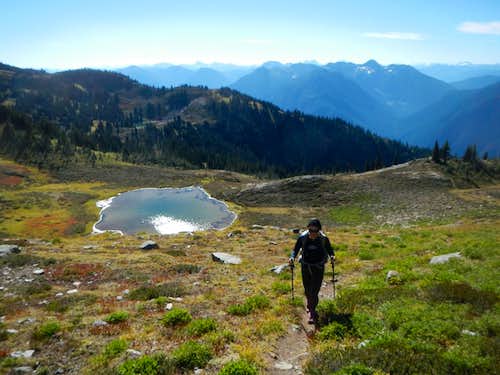 The Small Lake
At 1520 meters, the trail crosses a creek and good water can be gathered here.  After some more elevation gain, the trees thin out and views start to appear. 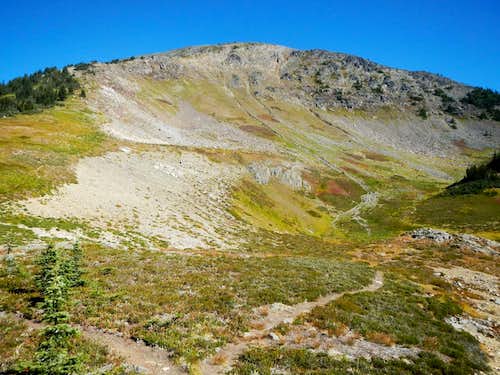 Upper Lake Basin
After approx. 7 kms the trail enters a meadow interspersed with rock patched and boulder fields.  When the snow has melted off, there is a small lake here.

Above the lake, the trail is easy to lose.  Continue to ascend the main ridge and watch for where the rocks are marked with cairns and red paint arrows. It might be tempting to follow the ridge crest near the top, but the route makes an ascending traverse through talus below the ridge crest.

After 11 kms you reach the final summit ridge which requires a short scramble to the south peak and another, slightly more technical (a few class 3 moves) to the north peak. The views are outstanding. In the winter you can bypass many of the switchbacks and obviously won't be able to find the trail.

The interactive map above can be downloaded as a GPS track log.  See link at the top of the page.  The map below is a printable copy. 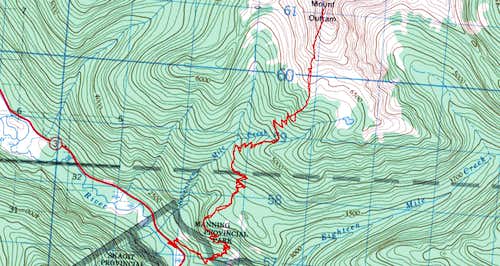 There is a lot of camping in nearby Manning Park. See here for more details. 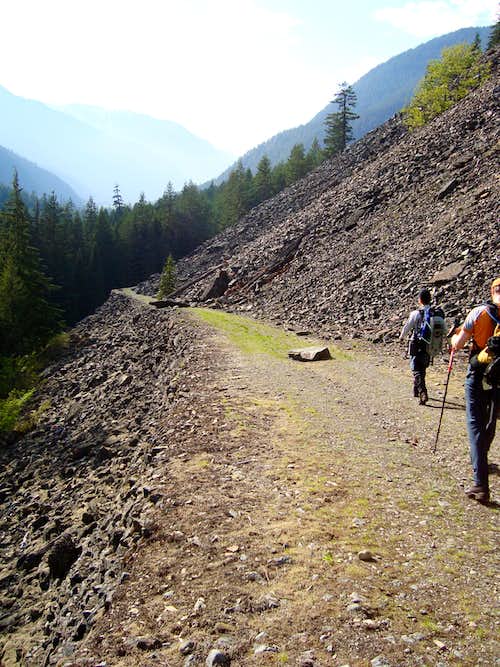 Here is a little history about "The Engineers Road".

From 1857 to 1863 the Royal Engineers helped to lay the foundation of British Columbia. The Sappers were soldiers sent from England to build the roads, survey the land, plan the towns, draw up maps and even settle disputes of the new colony of British Columbia. When their tour of duty in British Columbia ended, most quit the army and settled here.

One of their tasks was to survey a route to the gold fields at Rock Creek. Miners were flooding across the border with supplies, mining the gold and then exporting it back to the U.S. All without paying import taxes or duty on the gold. It became obvious that is sovereignty was to be maintained, a "good mule road from Hope to Similkameen" would have to be built. Edgar Dewdney of Hope was the low bidder at 76 pounds of sterling per mile. In 1861, portions of the Dewdney Trail were widened and upgraded to a wagon road by the Royal Engineers.