Overview: From Den of Thieves to Missile Base 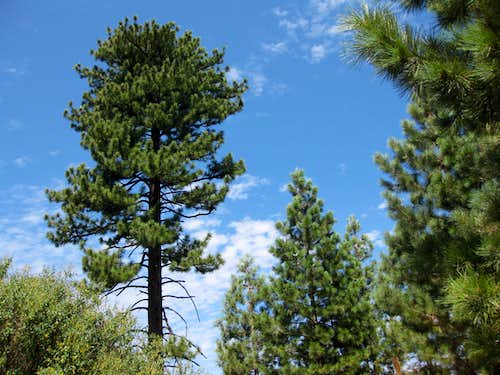 Barley Flats is a beautiful forested ridge separating the Big Tujunga and West Fork watersheds in the San Gabriel Mountains’ front range. It is a 2-mile long rolling, forested plateau at an elevation of just over 5,000 feet. In his Trails of the Angeles, John Robinson tells us that in the 1850’s, it was a prominent hide-out for horse thieves and cattle rustlers. Later on, it became a favorite stop-over and camp for hunters. Fast forward one hundred years and this same gorgeous piece of terrain that was a haven for both thieves and sportsmen, became the site of a Nike-Ajax (non-nuclear) anti-aircraft missile facility. It was designed to protect the Los Angeles area in case the “Cold War” became “hot.” The control radar system for the battery was located on the summit of Mt. Disappointment. The missile launch site was in place between 1954 and 1961. The launch site rigs were taken down, but the administration buildings remain to this day. Up until 1992, the buildings were used to house a county probation camp (how ironic the connection back to the criminal element!). However, the area today has drawn a different element; the buildings are now used as a religious retreat called Camp Unity. In case the beer drinkers are wondering, Barley Flats was named by the hunters who camped in the area in the 1890’s. They apparently thought that a variety of wild rye that covered the area looked like a barley field. The two routes to Barley Flats recommended here begin at the Red Box Ranger Station trailhead. Two others mentioned in passing start from different locations as described in the links provided to the Sierra Club’s Hundred Peaks Section pages for Barley Flats.

Route 1 From the Red Box trailhead, cross the Angeles Crest Highway and go northeast along the highway for about 100 feet. Take the fire road that comes up on the left to join the highway. Continue about ¾ of a mile to a trail junction. The trail going right is the Barley Flats Trail, an old roadbed. On this route, you will be coming back on this trail. However, for now, continue left at the junction and follow the trail going past the very steep ridge just south of Mt. Lawlor until you reach the signed saddle between Lawlor and Strawberry Peak (elev. 5,200’). Here, you are 2 miles from the start. 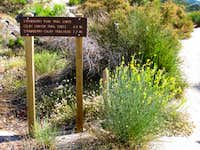 From the saddle, turn right (east) and head up the use trail on Lawlor’s northwest ridge about 0.6 miles to the summit. You will be afforded some great views of Mt. Wilson, Occidental Peak, San Gabriel Peak and Mt. Disappointment as you climb this ridge. From Lawlor’s summit, looking northeast, you will see Barley Flats’s long, forested ridge heading north to its summit. Proceed down Lawlor’s east ridge along a firebreak/use trail that connects with the Barley Flats ridge. You will go over three major bumps before you gain the Barley Flats ridge. As with Barley Flats’ tree carpeted ridge, Lawlor’s east ridge is lush with trees and beautiful flora. 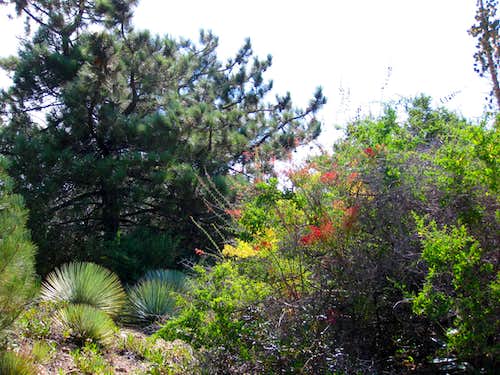 A bump on Lawlor's east ridge toward Barley Flats 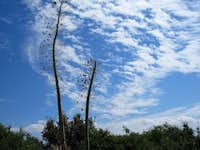 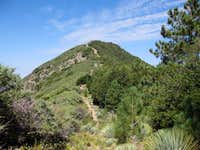 Looking back at Lawlor summit along its east ridge

Continue following the ridge as it turns north towards the summit. Presently, the use trail is greatly overgrown and you will lose the trail in a number of places. 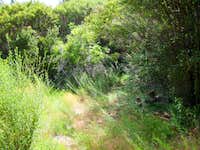 How to get through?

As you proceed, look west and you will get unique views of Strawberry Peak and Mt. Lawlor. 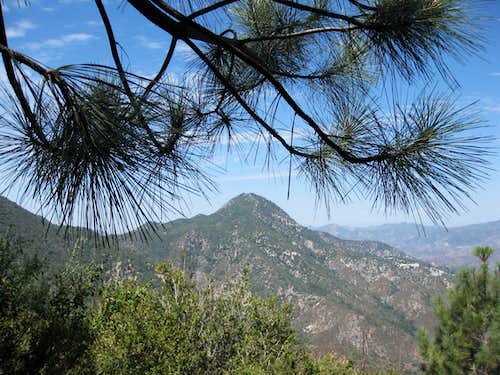 Within about ½ mile of the summit, the trail peters out and you must start descending through thick forest. As you descend, bear to the left and you will eventually hit a road that leads straight to the green water tank and summit. A lock on the gate in front of the spiral stairs climbing to the top of the tank is usually left unlocked. Go through the gate and climb the stairs to the top to get additional great views of the area. Note that the summit register is in a red can in a flat brushy area about 100 yards south of the tank. To return to Red Box, head back down the road you came up on. When it curves left, do not follow it (this section goes to Camp Unity), but instead either (1) pick up a faint use trail through the bushes on the right side of the road or (2) continue straight across the road cross-country traversing under the top of the Barley Flats ridge and then dropping down to meet the Barley Flats Trail. As of July 26, 2008, this trail was in terrible shape, tremendously overgrown, especially with yucca, buckthorn and thistle plants, and washed out in places requiring detours. It is passable with effort but be forewarned! 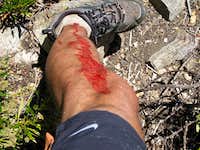 Price of trail running on Barley Flats Trail. I got nailed by a yucca 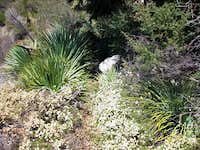 After 2.25 miles, the trail will reach the junction with the trail that you took to Mt. Lawlor. Bear left and complete the ¾ miles to Red Box. Route 2 This route is an out-and-back on the above described Barley Flats Trail. Begin this route as in the directions for Route 1 above except that, when you get to the junction ¾ miles from the trailhead, bear right onto the Barley Flats Trail and hike (Class 1) for 3 miles with 1,000’ of gain to the summit. Then retrace your steps. 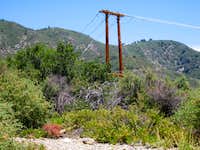 The Barley Flats Trail begins at the rust colored bush

Route 3 This is essentially a drive-up involving only ½ mile of hiking. See the Sierra Club's Hundred Peaks Section page for Barley Flats under “Route 1.” Route 4 This route begins at Alder Creek off Upper Big Tujunga Road and is 8 miles round-trip with 2200’ of gain. See Sierra Club's HPS page for Barley Flats under “Route 2.”

From the 210 Freeway, exit at Angeles Crest Hwy (SR 2) and go north. At 9.5 miles, you will come to the Clear Creek Information Station and the junction with Angeles Forest Highway. Continue straight on SR 2 about 4.5 miles to the junction with the Mount Wilson Road at the Red Box Ranger Station. This is your trailhead and you will find plenty of parking here.

You will need an Adventure Pass or Golden Eagle Pass to park your vehicle anywhere within the Angeles National Forest, including this trailhead. These passes are currently sold at the trailhead you will use, the Red Box Ranger Station ($5 per day or $30 for a yearly pass). Otherwise, Adventure Passes are sold at most sporting good stores.

There are no campsites in the immediate vicinity of this peak. The closest camping would be at Valley Forge Campground, 2 miles from the Red Box trailhead.

The peak can be climbed year round. During the winter, of course, you may encounter snow conditions so equip yourself appropriately. Check forecast information for nearby Mt. Wilson in local newspapers or on internet weather services. Snow is common at elevations above 5,000 feet during the winter. Consult the Calif. Dept. of Transportation (see link below) for road conditions during the winter.

USGS Topos: Chilao Flat 7.5 This peak is under-appreciated, possibly because the summit is occupied by a water tank. However, the thick forest cover of oak, spruce and especially pine, on the rolling ridge is a unique combination in the front range. 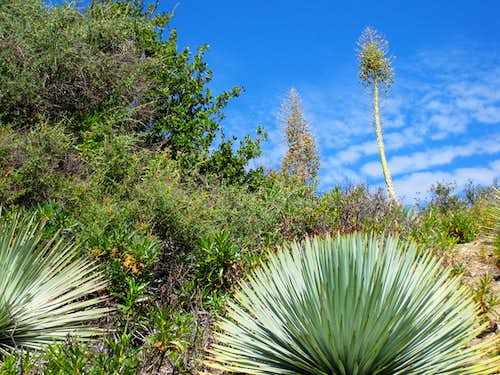 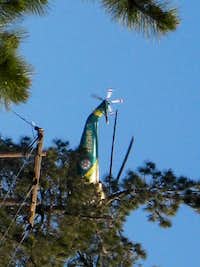 Sheriff's Copter near Barley Flats but not in trouble 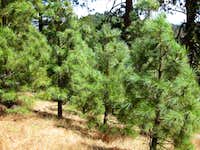 The site has been abandoned now for a few years. Vandals have wrecked much of the site though the buildings are mostly intact. The vehicle gate at the bottom is now permanently closed to the public, but hikers are still able to use the road to reach the summit.