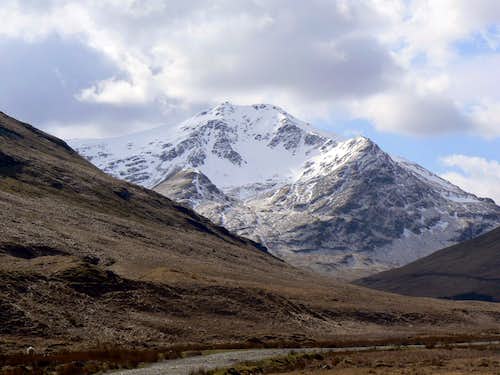 Beinn Laoigh (translation: Hill of the calf) is undoubtedly one of the finest and most magnificent mountains in the Southern Highlands of Scotland. Beinn Laoigh is at its best when the great Coire Gaothaich(Windy Corrie) is filled with snow and it’s this aspect that gives Beinn Laoigh its alpine character. This and its unmistakeable shape has given the peak the favourable tag of ‘The Queen of Scottish Mountains’.

Beinn Laoigh or Ben Lui as it is more commonly spelt stands at a height of 1130m/3703ft. This peak is a Scottish Munro and is number 28 in the Munro heights table. 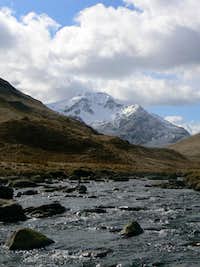 Beinn Laoigh is situated within the Glen Lochy hills range and its height and splendid shape make it stand out above all of the other neighbouring peaks and rivals Ben Cruachan in the affection of many hill lovers. It has five well-defined ridges radiating out from the twin topped summit of which there are four corries between. The principal attraction to the climber lies hidden in one of these deep corries, Coire Gaothaich, on its north-eastern slopes, where the sun rarely shines and the snow lingers long into the spring.

This classic ascent of Beinn Laoigh is from the east up the Cononish Glen. The approach walk in along the track is quite long, but the tremendous views towards the peak eventually come into sight and suddenly the draw of the mountain really starts to kick in. The sides of this coire are formed by parallel north-east ridges, and the more northern of these, Stob Garbh, is the normal ascent route taken.

The tourist generally sees Beinn Laoigh to its best advantage from the north side of Loch Awe, where it is seen rising boldly above Kilchurn, but a glimpse of its great corrie, Gaothaich, is got from the railway line/road half a mile or so before reaching the town of Tyndrum. Tyndrum was originally a place where cattle drovers met prior to going to the markets. It was a section of land that lay between the east and the west. The name means ‘house on the ridge’. Today it is a welcome stop off point for walkers of the West Highland Way and for cars and buses full of tourists. 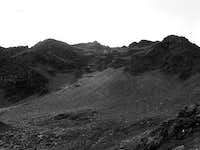 The Geological formation of Beinn Laoigh is of crumpled and folded mica-schist, with a general south-east dip. There are several small intrusions of igneous rock, one of which crosses the extreme summit of Beinn Laoigh. This geological formation is partly the reason for Beinn Laoigh being selected as a National Nature Reserve. The rich plant life in the area thrives on the soil that has less acidic content than other local areas in the Southern Highlands.

Details of the reasoning for this site being selected as a National Nature Reserve can be found via the link below. 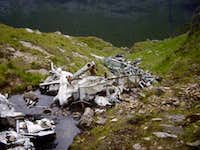 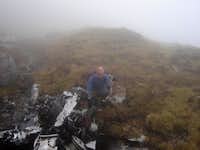 On the evening of the 15th of April 1941 an RAF Squadron Lockheed Hudson Mk.III T9432 crashed on Beinn Laoigh. The plane crashed close to the summit of the snow covered mountain in poor weather and fell onto the south eastern side of the mountain, finishing close to the 3000ft mark. Due to the position of where the craft finished up, it has been deemed to dangerous to try and remove the wreckage from the side of the mountain, and so, there it remains in surprisingly good condition for something that has been there for over 60 years.

When the plane went down there were four personal on board. Sadly all of the men perished in the crash.

Below is the details of the men who lost their lives;

The following link has some good images of the aircraft wreckage. 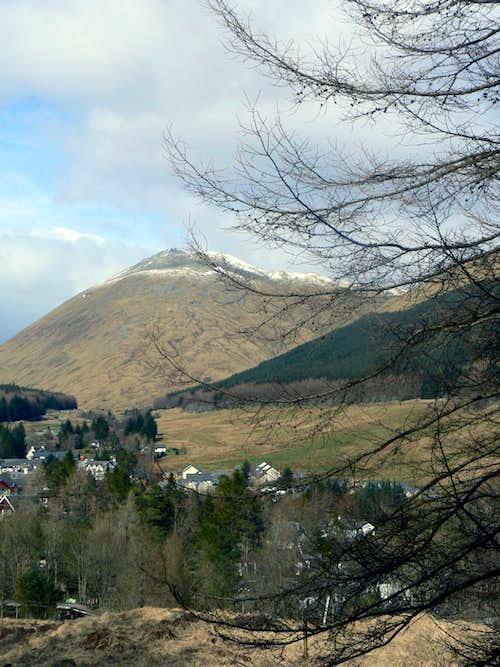 From Glasgow take the A82 road ,via Loch Lomond, until reaching Crianlarich.

From Crianlarich, follow the A82 towards Tyndrum. For the Cononish approach parking is available at Dalrigh(on the left) roughly 2 miles before Tyndrum or park at Tyndrum itself and head south towards the train station to the forestry track road. For the Glen Lochy approach, turn left just after Tyndrum onto the A85 Oban road and follow for roughly 5 miles until reaching a small parking area on the left. 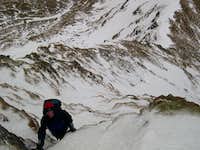 On the east ridge. (Photo by:asmrz)


The following aspects should be taken into consideration when you are in the Scottish countryside; 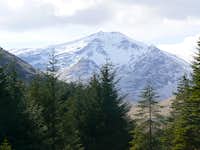 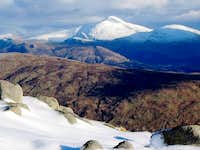 The best three place to base yourself for climbing in the Tyndrum Hills is either Crianlarich, Bridge of Orchy or Tyndrum itself.

Ben Lui was at the fore front in the birth of Scottish Winter climbing due to its easy access from Glasgow and Edinburgh. Ben Lui has been a popular winter climb for almost a hundred years. The best climbing on Ben Lui is to be had in the Coire Gaothaich, especially in winter conditions. A word of warning should be mentioned about climbing in Coire Gaothaich in thaw conditions, that frequently happen in the spring. Collapsing cornices and avalanches are common and the snow and ice debris seen at the foot of the corrie bear witness to the size of these avalanches.

Below are some of the climbs available; 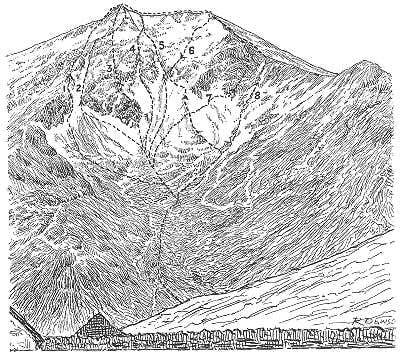 1. South-east ridge: First recorded ascent, 6th March 1892, The bounding ridge on the left of the Coire is best described as an easy scramble.

2. South gully(Grade 1): First recorded ascent, 15th April 1892, This broad gully has a couple of finishes. The normal line is straight up a narrow gully to the east ridge. The other finish leads onto the upper part of South Rib.

3. South rib(Grade 1 to 2): First recorded ascent, 2nd Jan 1896, The rib can be reached from the South gully a short distance above it’s foot. The upper part of the Rib is a scramble.

5. Central gully(Grade 1): First recorded ascent, 31st Dec. 1892, This is the grade 1 classic on Ben Lui that pops you out right on top of the mountain. The line is directly up the centre of the coire. The gully is narrow for about 100m and then opens out so there is plenty of scope for the (often a large cornice) approach.

6. Upper Snowfield(Grade 1): This route is not well defined, but it lies to the right of Central Gully up a broad snowfield. The finish may be made at the North-West top by a narrow little gully, or alternatively on the north-east ridge a short distance below the top.

7. North rib(Grade 1): First recorded ascent, 2nd Jan. 1896, this route is up the indeterminate buttress which adjoins the north east ridge. In winter it is likely to be a climb of no great merit on steep snow and rocks.

8. Gully to ridge of Stob Garbh: First recorded ascent, 14th Feb. 1892, as the South-East Ridge, this ridge on the right of the Coire is also best described as an easy scramble. 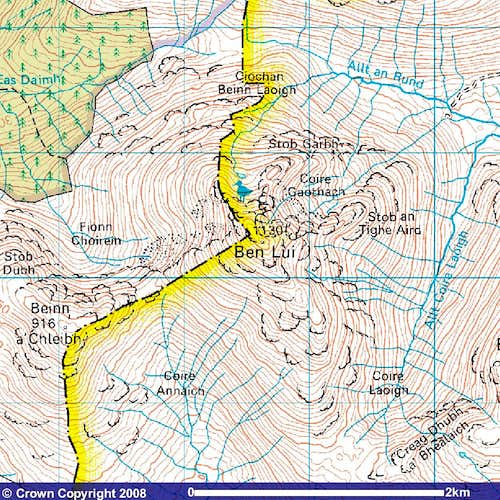 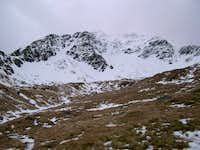 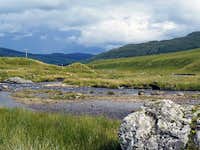 The weather conditions in the Tyndrum Hills can change quickly and you should ensure you are fully prepared for all weather eventualities. 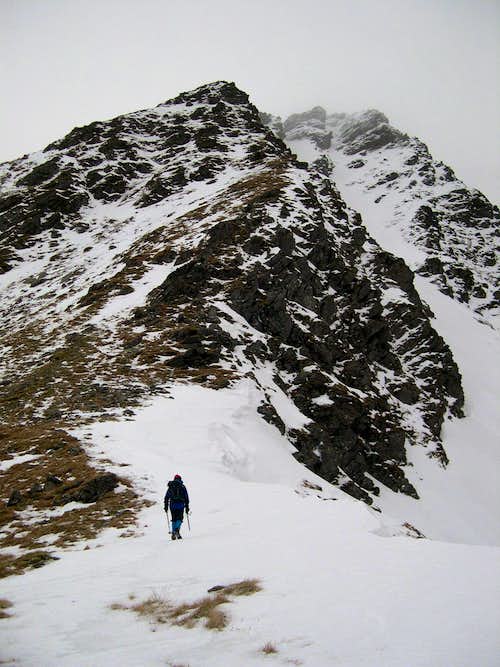