Doyle's Delight was named for its resemblance to the prehistoric setting of Arthur Conan Doyle's novel "The Lost World.'' Towering palms and strangler figs, their trunks wrapped in a green shag of ferns and mosses, rise and converge in a leafy canopy that keeps the moist forest floor in perpetual dusk. The ridge is so remote that the British Army's jungle
training unit, scientist and other researcher with multinational expedition drop most of the expedition members in by helicopter. 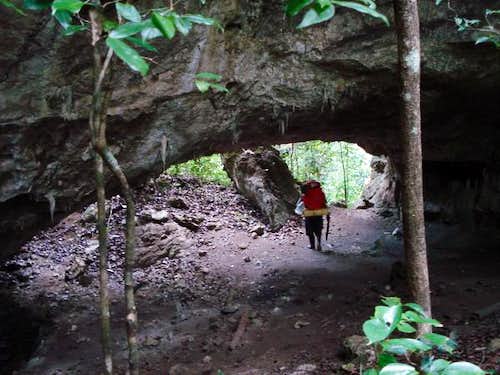 Doyle’s Delight, with UTM coordinates 1,824,500 North and 281,600 East, lies on the Maya Mountain Divide, approximately 6.5 kilometers north of the eastern margin of Little Quartz Ridge, and 32 kilometers west-southwest of Richardson Peak. With its elevation of 1124 meters (3717 Feet), it is the highest point in Belize.
The Maya Mountains, and specifically Doyle's Delight, are considered geologically old for this part of Central America dating back at least 65 million years. These high-elevation forests are sufficiently rare and unique in Belize.

The name Doyle’s Delight was first coined in 1989 (Matola, 1989). This name has meanwhile achieved widespread acceptance.

TRIP REPORT
Wikipedia
My own site