Otay Mountain is the highest summit of the compact San Ysidro Mountains, located in extreme southern San Diego County in California, barely a couple of miles north of the boundary with Mexico. Although just 3,566 feet high, the peak rises quickly from sea level, the ocean just about a dozen miles (straight-line distance) to the west. On the west side is the Otay Lakes (a reservoir system, actually), a county-run day-use park with picnic facilities. The peak is easily visible from most of southern San Diego, as few foreground hills block the view. A network of fairly good roads snake up the peak from its west, north and east sides, there to service the towers on its summit and for the Border Patrol, who run the range looking for crossers. The well-tended roads attract a lot of bicyclists. Your summit day will probably consist mostly of a drive and a short hike.

The word "Otay" is apparently derived from the Kumeyaay word "otai" (pronounced "Oh-Tie"), meaning brushy, which is an apt description of the peak. Too low for pines and other large trees, the peak is covered in a carpet of chaparral and low grass. Lower down, the surrounding lands are grassy with some cactus; depsite the fact the peak is so close to the ocean, the immediate surrounding area has a semi-arid desert-like quality to it. The name was given to a nearby ranch in the 19th century (and attached to the peak as well). At one time there was a community of Otay, which was long-ago swallowed up by the city of Chula Vista. Most of the San Ysidro Mountains have been designated as the Otay Mountains Wilderness Area; the roads themselves are outside this designation, so driving them is still an option.

The peak will probably attract attention for those bothering with the 2,000-foot prominence lists, as it squeaks onto the Caliofornia list with 2,086 feet of clean prominence. Otherwise, the most likely visitors are local San Diegans who somehow don't want to go to the beach, tower workers, the Border Patrol, and the occasional crosser. Most sources seem to denote the eastern road from Engineer Springs along CA-94 as the default approach road. We eyeballed the other roads and they look equal in quality. 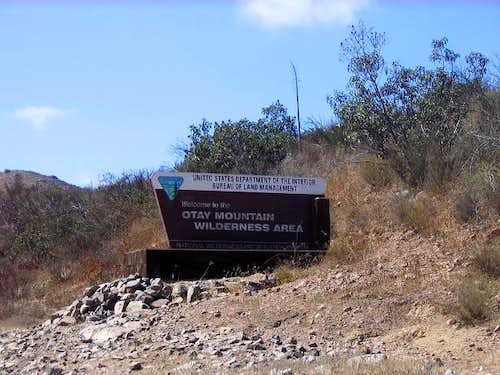 In southern San Diego, get on the CA-94 freeway and head east toward Jamul. At some point the freeway ends and becomes a major boulevard into Jamul. After Jamul, the road narrows into a rural two-lane highway. Jamul is the last place for gas and supplies. Past Jamul about 10 miles, come to the small community of Dulzura, and about a mile or so later, turn onto Marron Valley Road (signed, but it comes fast around a bend). From downtown San Diego to Marron Valley Road is about 25-30 miles, depending on where you define "center of San Diego" to be.

Go south on Marron Valley Road (graded dirt) through a residential area. About 3/4-mile later, turn right onto a road, unmarked other than a "stay on designated roads" sign. This road may be gated closed. In any case, turn right (west) onto this road. The round hill ahead of you is Donohoe Mountain; beyond that, the San Ysidro Range. Drive this road westerly up over a small pass, staying left at any intersection, until it is heading south in a small sandy canyon bottom. Soon it will meet up with the better-quality gravel road that goes to the top (see note A).

Turn right and proceed about 5 miles up this fairly good road to the summit area. The roads all meet at Doghouse Junction, northeast of the summit. You can park and make a short hike out of it, or potentially drive to the top. The final 1/4-mile spur road is paved.

Enjoy the views: San Diego and the ocean are visible to the west, as is Tijuana to the south. Try identifying the border between the two countries (hint: it's not that hard to do). Numerous peaks are visible to the north, east and south. The big peak immediately east is Tecate Peak, also inside California, barely.

Beware of bicyclists and other vehicles as well.

Note A: I am not sure where this "better" road begins. We did follow Marron Valley Road a bit south to where it dead ends near a firing range.

The initial road off of from Marron Valley Road is rough and probably requires 4wd, although it is short. The better mountain road is smooth but steep and narrow. Four-wheel drive probably isn't necessary other than to have better control especially on the descent.

Update: Adam Helman reported the gate off of Marron Valley Road to be closed when he visited early in 2009. He went up another of the roads from the west with no trouble. Whether this gate is regularly closed is anyone's guess.

Update, July 2010: (From Paul Klenke, regarding one of the alternate routes:

I drove up the Minnewawa Road way (the road up the north side of Otay) on July 11. At the RV park, find a narrow, paved road at the west end of the entrance area. You'll know this road by the overgrown gate at its start. This gate looks like it's always open. It makes for a narrow squeeze between bushes. After that, no more bushes but the initial road is bumpy and potholed. It improves the higher you go.

Doghouse Junction is reached in a few miles. It is the most direct way if coming from San Diego.

As for the road up from the east off of Marron County Road, the following note is found in the Getting There section:
"Note A: I am not sure where this 'better' road begins. We did follow Marron Valley Road a bit south to where it dead ends near a firing range."
The better road starts beyond the firing range. This is evident from a review of the map and satellite imagery.

I passed several Border Patrol vehicles but they didn't accost me. All you have to do is look around you and you'll probably see one somewhere.

The final road to the summit can be driven rather readily (some brush encroachment to worry about but it's paved). 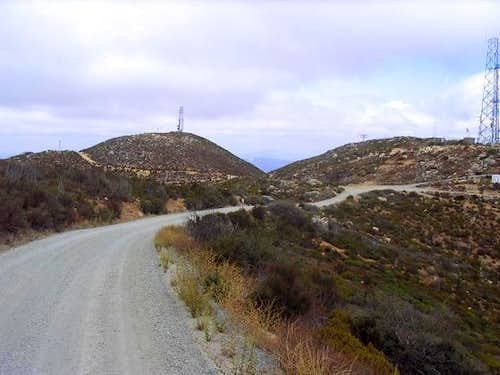 Most of the range is within the Otay Mountains Wilderness, but the road is open to vehicles. No fees. 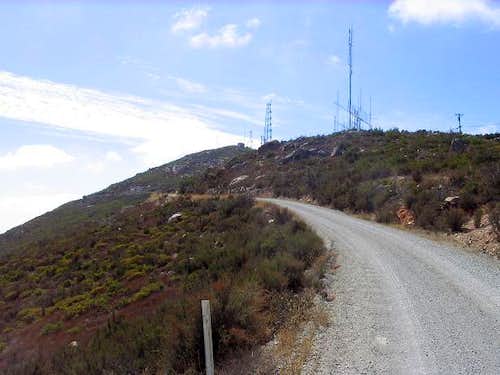 You can camp here according to Wilderness rules. Find an open spot and try to re-use spaces whenever possible. Since you'll probably just be here a few hours, camping probably won't be part of the equation.