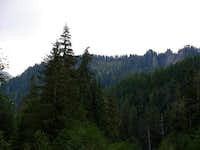 Eastern Side of Barlow Point

Barlow Point is a minor mountain summit located in the central Cascade Mountains of Washington State. Located near the midway point between Verlot and Darrington, one of many highpoints along Mountain Loop Highway, Barlow Point offers a scenic alpine viewpoint attained via a short drive and even shorter (1.2-mile) hike. 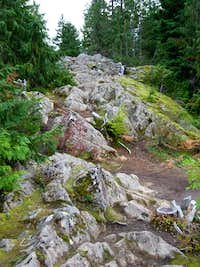 
Barlow Point first gained widespread recognition in 1935, when the U.S. Forest Service began construction of a summit trail and fire lookout. Positioned at the junction of the South Fork Stillaguamish and South Fork Sauk valleys, and containing far-reaching views, the peak was an ideal location for a fire lookout. However, the fire lookout was burned and destroyed during the “Buck Creek Fire” of 1965. Very few remnants of the past lookout are still at the summit. 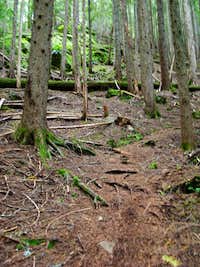 
The summit trail is also known as Barlow Point Trail #709. This trail begins at the site of the now-defunct Barlow Pass Guard Station (2361’ elevation), on the north side of the Mountain Loop Highway. On the other side of the highway is the entrance to the route leading to the old mining townsite of Monte Cristo. Two trails intersect with Barlow Point Trail. After hiking 1/4-mile, “Barlow Cut”, a section of the old Everett & Monte Cristo Railway grade, intersects the summit trail. Shortly thereafter, at the 0.3-mile point, Old Government Trail #733 intersects Barlow Point Trail. The Old Government Trail is a two-mile long trail that runs parallel to, and above, the old Everett & Monte Cristo Railway grade. This can be a pleasant alternate hike when visiting Barlow Point. 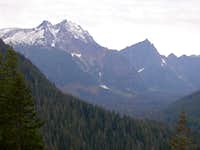 
After passing the trail junction with the Old Government Trail, Barlow Point Trail begins switchbacking for 0.9 miles through a lowland forest to the summit area. Although the trail ends at a viewpoint location, a possibly higher summit (3222' elevation) location is found north of the trail-end but has no views. Despite its short height in relation to neighboring peaks, Barlow Point offers a unique location by overlooking two major river valleys from its summit. To the west, Big Four Mountain and Hall Peak are visible. To the north, Dickerman Mountain and Twin Peaks are visible. To the east, Sheep Mountain looms largely overhead. To the south, Silvertip Peak encompasses the landscape.

Barlow Pass and Barlow Point were each named in honor of John Q. Barlow, an engineer who surveyed the original Monte Cristo Railroad route. The peak name was made official after approval by the State Board of Geographic Names on September 13, 1985.

2) Turn left up a very short driveway leading to the trailhead parking lot. Additional parking, if needed, is available across Mountain Loop Highway.

Who is Captain Barlow?

My sources indicate that both Barlow Point and Barlow Pass were named for John Q. Barlow who discovered the pass and was the surveyor and engineer who determined the best path for a railroad line into Monte Cristo.

I believe it is the same person. My original source only said Captain Barlow but that does not mean a Sea Captain or something similar, just an identifier for rank. I will change the page to reflect *why* Barlow Point and Barlow Pass were named in his honor. However, you are incorrect regarding the discovery of the pass. That distinction goes to F.M. Headlee, a prospector who discovered the pass sometime around 1891.

If I am wrong, then my sources are also wrong. See for yourself. Quite a few sources cited there at the bottom of the text.

A lot of stuff was happening in that area around the same timeframe. Plus, precise record-keeping was not the strong suit of that era. I will try to find a better source when I get time but for now try this link: http://www.hikingwithmybrother.com/2013/04/barlow-point-trail-709.html