Profile image by Roam Around.

At 13,117 feet, this ranked Colorado 13er with a painfully cute nickname gets no respect. Higher than all but nine U.S. State Highpoints, “Cupid” is the unheralded 555th highest peak in Colorado.

If the Super Dome (elevation 3 feet) in New Orleans was torn down and the entirety of “Cupid” (bedrock and all) planted in its place in the bayou soil, the mountain would rise thousands of feet above The Big Easy. “Cupid”, placed in any of 41 U.S. states except Alaska, California, Colorado, Washington, Wyoming, Hawaii, Utah, New Mexico & Nevada could shine supreme as the highest point of each state. Trans-located to Montana, Cupid could be the highest point in that impressive mountain state, overtaking Granite Peak (12,799) by more than 300 feet for the perch of loftiest Montana summit. Mountain Goats on "Cupid".
Image by Roam Around.


But there, east of Loveland Pass (elevation 11,990 ft.), sits the gentle hump of “Cupid”. Not only unloved but sometimes despised, “Cupid” is more often cursed as “that &#$%@*! hump” standing between hikers leaving Loveland Pass and the summit of Grizzly Peak. Indeed, many climbers summit “Cupid” en route to Grizzly fully unaware they have reached the top of a unique, ranked Colorado peak.

But lowly “Cupid” holds his own splendid pleasures as those on top can take it full-panorama views of high country peaks too numerous to count and gaze with butterflies in the stomach at the imposing northwestern ridge of Grizzly Peak before them.

Cupid sits on the Continental Divide about 65 miles west of Denver via I-70 near Loveland and Arapahoe Basin ski areas. As the crow flies, the peak is just over a mile southeast of the 11,990 ft. summit of Loveland Pass. The route from Loveland Pass is undoubtedly the most popular route to the summit of “Cupid”. Other options exist from Grizzly Gulch, including the route ascending the ridge from Baker Mountain (12,448 ft), though a direct route up Grizzly Gulch to the saddle between “Cupid” and Pt. 12,936 may be an option as well. Arrive early for a parking space! In the winter, the Loveland Pass area is popular with backcountry skier and snowboarders and in heavy snow years parking can become quite limited as the plow piles snow up to 10 feet deep on the highway shoulder. During summer months, tourists crowd the summit of the pass for easily-gained Continental Divide views. 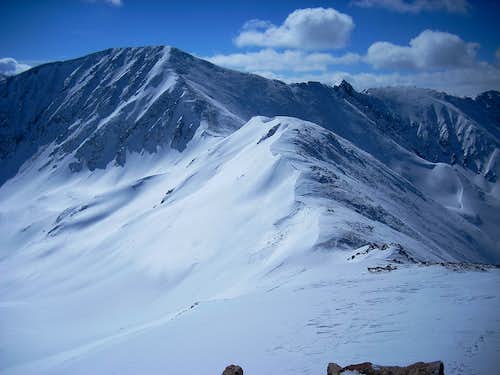 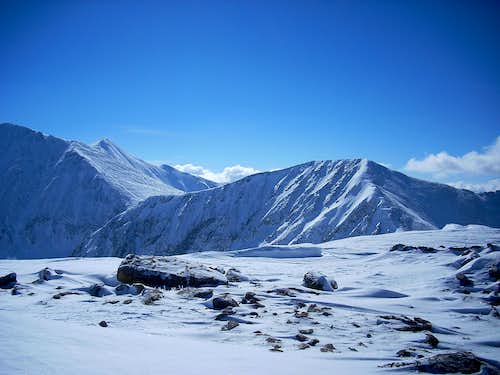 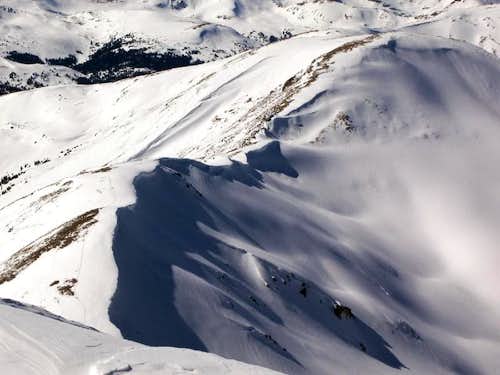 Descending the south slopes of "Cupid" toward Grizzly Peak.
30 Mar 08
Residents of the Front Range metropolitan areas, especially Denver, may find no need for hotels or campsites to visit “Cupid” as the drive to this short hike is quite reasonable to execute as a day outing.

Developed campsites are quite limited in the area, though rustic car-camping would be an option along Stevens Gulch Road and backcountry campsites could be found along the Grizzly Gulch route.

Simple, family-run lodging can be found in nearby Georgetown, Colorado. Visit this Georgetown Lodging Guide for more information. Georgetown is 10 miles east on I-70 of the junction with Hwy 6.

Keystone, about 10 miles west of the summit of Loveland Pass on Hwy 6, provides a wider variety of lodging. Expect high rates in the winter during peak ski season, but good deals can be found in the quieter summer months near the Keystone Ski Resort. Visit the official Keystone travel page for more information about lodging in the area.

The Loveland Pass route is accessible year-round, thanks to the fact that Hwy 6 is plowed all winter long. Expect high winds year round, which can be brutally strong in the winter. Windloading on the Continental Divide near "Cupid".
30 Mar 08


Furthermore the smooth ridge walk provides little in the way of wind blocks, leaving the hiker exposed to the full force of the gales. Additionally, these powerful, almost constant winds contribute to considerable wind-loading and cornice development on the east side of the ridge. Respect these dangerous cornices and give them a wide berth.

The Grizzly Gulch route is best avoided in the snow season due to avalanche risk. Several avalanche chutes dump into Grizzly Gulch from the south and southeast while the northern and northwestern slopes of Baker Mountain should be approached only when the snowpack is very stable. Additionally, wind-loading from prevailing winds from the west across the Continental Divide would make the eastern slope or ridge approach dicey.