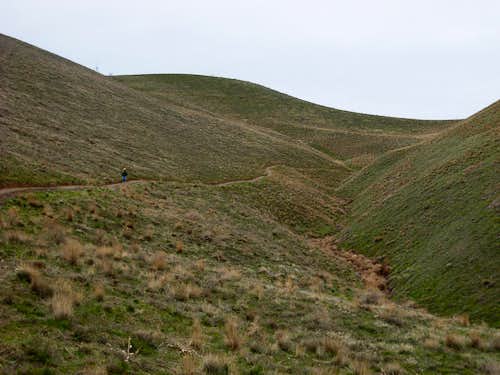 Badger Mountain is a popular mountain summit located within Benton County of Washington State. The most prominent highpoint of the Tri-Cities (Richland, Kennewick, Pasco) area, the mountain is passed by thousands of people every day.

With a prominence of more than 800', Badger Mountain offers one of the very few true summiting opportunities near the Tri-Cities area. In fact, it is estimated that between 1,000-2,500 people reach the summit of Badger Mountain every week, making it one of the most summited peaks in Washington State. Possibly the most famous Badger Mountain summiter has been William Painter, who, at age 83, became the oldest man to summit Mount Rainier. He regularly used Badger Mountain as a conditioning hike for Mount Rainier, climbing Badger Mountain over 1,300 times while carrying 40-pound weights strapped to his backpack. 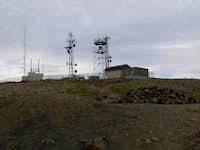 Several landmarks in the area have been named after the American badger, which once had a very large population in the region. Officially, Badger Mountain was named for that reason, and the name was approved by the State Board of Geographic Names during June of 1974. Unofficially, some locals have suggested that Badger Mountain was actually named after Badger Spring, a groundwater spring thought to have been originated from a badger's den and located six miles south of the peak. The summit is comprised of several communications towers in a privately-owned fenced area. From the summit, Richland can be seen northwest of the mountain and Kennewick can be seen northeast of the mountain. The Columbia River and the city of Pasco can be seen in the distance north of the mountain. 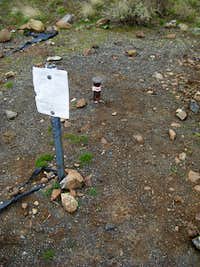 The "true" summit of Badger Mountain has been disputed, as it appears the actual summit location might have ultimately moved due to human activity on the mountaintop. There are two neighboring hills, both having nearly the same elevation, at the top of the peak. Both hills are "true" summit candidates. When the peak was originally surveyed by the USGS, the true summit was correctly designated as the E/SE hill where the two main summit trails (Canyon Trail, Skyline Trail) now end. On maps (online, paper, Garmin GPS), the "true" summit of Badger Mountain is still shown as this E/SE hill. A USGS survey marker (named "Erie") was placed on this hilltop. Some maps show the "Erie" summit marker reference, as well. 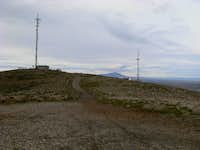 However, maps and USGS references are/were basing information of the mountain before any structures were added to the hilltops. In the process of constructing the communications towers areas on the hilltops, the actual highest point was shaved down. One USGS "Erie" summit marker still remains on the E/SE hilltop, just outside the fenced area of the communications towers. As a result, it is possible the W/NW hill is actually slightly taller than the original true summit.

To properly claim "summiting" Badger Mountain, it is recommended to summit both hills to cancel-out any possible disputes of the "true" summit location. 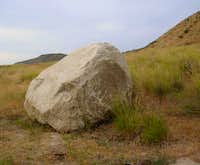 Badger Mountain was created by numerous lava flows originating from the Columbia River Basalt Group between 8.5-14.5 million years ago. The same lava flows created nearby smaller peaks, as well. Traces of sediment can be found between some of the lava flow layers on the mountain, indicating past encounters with the ancestral Columbia and Snake Rivers in-between periods of lava activity. Erosion has gradually affected the mountain by stripping away younger rocks and exposing older rocks. Today, the rocks at the summit originated from the Pomona Lava Flow occurring 12 million years ago.

Once the Columbia River Basalt flows ceased, the mountain occasionally was exposed to floods of the ancestral Columbia and Snake Rivers between 3-8 million years ago. These floods lined the mountain with sediments. In some of these sediment deposits, fossils have been found of extinct camels, mastodons, and horses, as well as other animals. As the Columbia and Snake Rivers receded and ceased flooding the mountain ridge 2-3 million years ago, erosion once again shaped the slopes of the ridgeline.

Badger Mountain has also been subject to seismic activity during its geological history. Two tectonic fault zones are located on the north side of Badger Mountain. Both fault zones intersect on the ends of the mountain ridgeline. The main fault is located near the beginning of the Canyon Trail. As a result of this faultline, rocks on the bottom steep slopes found on the northern side of the mountain tend to be tilted north (some rocks almost vertically tilted). 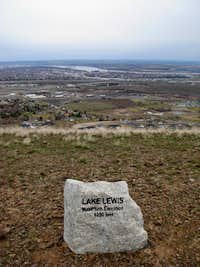 Later during Badger Mountain's history, Ice Age floods repeatedly surrounded the mountain with glacial water. The source of this water was the breakup of ice dams at massive Lake Missoula, located near present-day northwestern Montana and Lake Pend Oreille in northern Idaho. As the ice dams broke, floodwaters reached the Pasco Basin where Badger Mountain is located. Wallula Gap, located east of the basin, was narrow enough to cause a major constriction of the floodwaters.

This constriction caused the floodwaters to continually rise in Pasco Basin and surrounding the slopes of Badger Mountain. These floodwaters reached elevations surpassing 1200' above sea level and created what was known as Lake Lewis. The "lake" was only temporarily, however, gradually draining out of Wallula Gap. Icebergs floating atop the lake became grounded during the drainage period, and some of these icebergs contained large boulders known as "erratics". These "erratics" were then left behind on mountain slopes and surrounding areas as the icebergs melted.

After the final Ice Age floods, other geologic processes shaped Badger Mountain into what it is seen as today. Strong windstorms deposited "loess", layers of fine sand and silt. Flash floods and seasonal drainages created multiple gullies on the mountain slopes, including gullies the Canyon Trail traverses. Since the last Ice Age, the mountain has also been shaped by landslides, as well as volcanic ash deposits from Cascade volcanoes located hundreds of miles away west of the mountain. 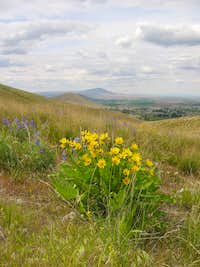 Until 2005, much of Badger Mountain was owned by a private developer. A non-profit organization called "Friends of Badger Mountain" was formed to spare the mountain from development, eventually raising over $750,000 to purchase major parcels of land on the mountain before ceding the land to the city of Richland for recreational use. Upon taking control of the land, the city of Richland worked closely with the "Friends of Badger Mountain" organization to create the Badger Mountain Centennial Preserve in 2006. The Canyon Trail, a hiker-only summit route, was constructed in 2005. The Skyline Trail, a summit route open to hikers, mountain bikers, and equestrians, was constructed in 2006.

DRIVING DIRECTIONS FROM I-182:

TRAILHEAD FOR CANYON TRAIL:
1) Take Exit #5A onto WA-240 East.
2) After 1.3 miles, take the exit for Columbia Park Trail. Head west on Columbia Park Trail.
3) After 1.1 miles, turn left onto Leslie Road.
4) After 1.1 miles, turn right onto Gage Road.
5) After 0.2 miles (just beyond Starbucks/Albertons), turn right onto Keene Road.
6) After 1.7 miles, turn left onto Shockley Road.
7) Follow Shockley Road to its end. Turn left onto Queensgate Road.
8) Go up the hill. Follow the brown-colored directional sign(s). Park in the parking lot, next to the cinder-block pumphouse.
9) Start hiking along the trail around Westcliffe Park for 0.15 miles, until reaching the base of the mountain and the official "hiker's only" trailhead.

Using either route, "leash laws" and "scoop laws" are in effect for any/all dogs.

No permits are required to hike on Badger Mountain.

No camping is permitted within the Badger Mountain Centennial Preserve.

For more information regarding Badger Mountain, or to learn more about volunteer efforts to maintain and preserve land on and near the mountain, please visit the website for the "Friends of Badger Mountain" non-profit organization.

In their recent newsletter, Jim L. was trying to get volunteers to join in the annual trail maintainance effort. See link at the bottom of the front page. Also a nice map is contained HERE, compliments of the same group which I applaud for all they have done to preserve this mountain and build the trails.

UPdate: A new trail has been added on the north side that branches off near the top of the switchbacks and another trail is being created (may be finished) that wraps around the mountain on the south side, taking off from the west side approach.

Thanks for the update. During my last several visits to Badger Mountain, people have told me that housing developments will be happening on the mountain slopes. Do you know about those, and if they will encroach on any of the existing trail systems?