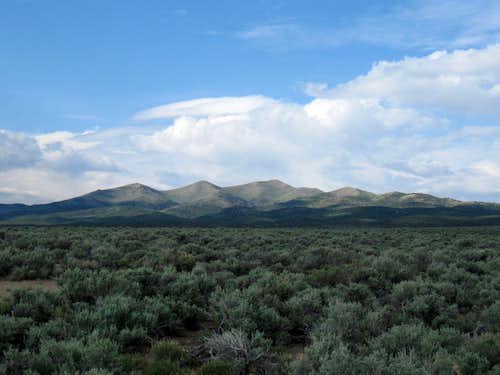 Want an easy hike with a difficult and somewhat confusing drive? This is the one for you. Murdock Mountain is a peak that only a peakbagger that is into chasing the prominence list or a "range" highpoint collector would be interested in. Located in northeastern Nevada, west of the town of Montello, the Murdock Mountain range is one of the least known ranges in the state. True, anyone you would ask in Montello could tell you more information about this range but that is research that has yet to be conducted. No information was available on this area from any source so why the name of Murdock, who Murdock was, and any historical information was lacking. 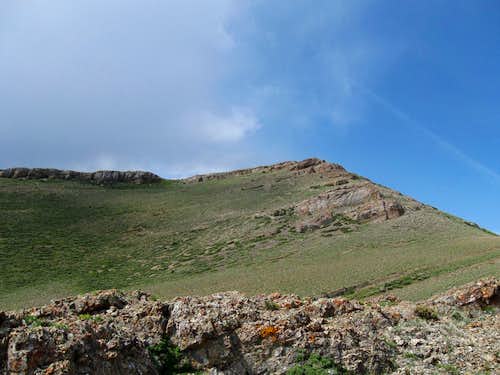 Murdock's summit
As you can tell from the picture above, is in an area that has a special beauty to it. The register found on the summit indicated that this one is seldom visited with only 5 other people making the effort in the past ten years. The glass container that was being used to contain the register is broken and we found the register in bad condition. We placed the log book in a zip lock bag and would encourage the next visitors to have a new container. The paper was so wet that I couldn't really even sign the register without tearing the paper.

Located west of Wendover and east of Wells Nevada, as you travel on I-80, look for exit 378 at Oasis. Drive about 6 miles north towards Montello and just after passing over the old RR tracks, look for an unsigned dirt road to the left. You now have 12.4 miles to the trailhead, if you can make the correct turns and many vehicles will not be able to drive all the way as you will need high clearance and 4WD and the ability to deal with spots where the road "tilts" enough to spook your comfort zone. O.K., here we go. 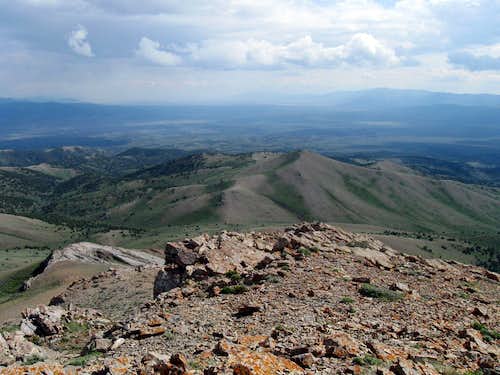 Whew. I'll add a map later to help with that overload I just put you through. The above information was gathered on the way out since we had to find the right roads by trial and error which cost us a good extra hour on the way in. We almost gave up twice but my partner, Ken Jones would say, "Let's try this way" and finally we found the way. After going up one wrong road and hitting a "stay out" sign, we tried again and by going a bit further to the west, we found the key road. We were also hailed on, rained on (hoping it wouldn't rain so much to create mud) and had to dodge cattle at several spots. If you find that road conditions are such that you do not want to add scratches to your paint job or the spots where the road "tilts" unnerve you, feel free to park and walk from that point.

Note:
SP member Greg (gjagiels) hiked to the summit of this peak from the north. He said it was about a 20 mile hike. See more info under routes

From the area where we parked, we followed a rough jeep track up another quarter of a mile and then cut cross country up towards the summit. There is nothing technical, no scrambling required if you work your way around to the northeast and then step up onto the highest area of the mountain.

Another peakbagger, Greg Jagielski, shared this information: on his visit to Murdock from the north:
"I don't think I mentioned that I did Murdock, Kadee might have? It was a 20 miler for me (starting from the RR tracks at Cobre). I was surprised to find people living at the very base of the mountain, very strange! I saw several houses hidden among the Juniper and Pinyon pines.

I should've used your way, it would've saved me a few miles :-) For some reason I thought you came in from the North? Oh well, I just quickly looked at the map and gave it a go. I started near Cobre on a road that paralled the road that you mention and followed it to the houses in the Juniper and Pinyons and followed a road that dead ends at about 7450 to the west of where you started from. You would have crossed the road I was on at the Hill you have marked on your map. The road I followed isn't shown on your map.

I would say your way is best to approach the peak because the road I was following was good, but not as well used as yours. Though a car might be able to follow your approach and end up at 7450 where I started without problems. By these houses the road I was on intersected with another and became a more used road to 7450 and probably passable to a car. But I haven't been on the roads between. What a maze of roads on Murdock and I can't believe people live out there! What do they do in the winter!?!?

You did mention to me that when I did Murdock it would need a new container since the one was broken. As soon as I started hiking I thought "Oh no, this is the peak with the broken container Dean told me to replace, Ahhh!" The baggie was open and of course the register wet, I had a pretty durable baggie which I used, but no container. The baggie should suffice until a container is placed."

No "No Trespassing" signs were encountered and I believe the area is administered by the BLM. More information may be obtained by contacting the
following: 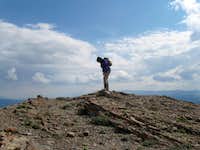 We did encounter cattle in the upper canyon but no structures of any kind. I'd recommend staying on the existing road(s).

Recently I received the following information which I think is worth sharing here:  Brenden (aka professorontherun) (Utah) (11 May 2017)
"You may want to edit the "red tape" section about the no trespassing signs. Much of the area is BLM land, but there are a number of private land holders checkerboarded in. There are a handful of cabins on the south side of the Mtn that don't like trespassers. A friend of mine has a cabin he is letting me use for writing retreats, so I may well do this peak again - maybe the whole ridgeline! I'll add more trip reports if I return."

There you have it,  please be aware of these private inholdings and respect them.

No campgrounds of any kind are in the area but if you needed to camp, you could probably "bush" camp using the "leave no trace" ethics. Nearby Wendover has a great offering of lodging and places to eat. True, you can even leave
more money there than you might normally choose to (its called gambling) or
you be one of lucky few who leave town with more than they expected to. (Most don't) 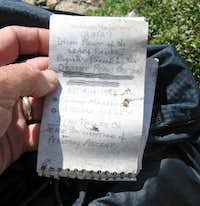 
When Ken Jones and I found our way to the top of this, we found a central benchmark and a glass bottle containing a register that had been broken.
The rain had made a mess out of the register book but it was still in condition where I could read it. The register had been placed originally by Gordon MacLeod and Barbara Lilley in 1999 and we were looking at it ten years later. The paper was so wet that to try and write on it with a pencil would tear the paper. We placed it in a plastic baggy with little hope for long term survival since this summit is rarely visited. Using the information I have found, the original register, peakbagger.com and lists of John, it appears that the following have been to the top of this mountain:

In the original register, I saw a couple visits by local ranch people, two of which exclaimed they could see their ranch from the summit.

A new register bottle was placed in 2010 by Ray Ray and he said he couldn't find the original register, that it was most likely, "gone with the wind". When you summit this mountain, please enter your visit in the summitpost summit log found on this page so I can keep this section up to date. 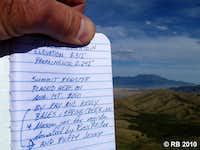 Often the peaks in Nevada can be climbed in the winter but good judgement is required to pick the time and the peak. In January of 2015, Terry and Kelly Lister made the effort to go and visit the summit of Murdock Mountain. They encountered a fair amount of snow but not enough to stop them. Kelly posted the following pictures on her facebook page and I thought it'd be nice to share several from her offering. 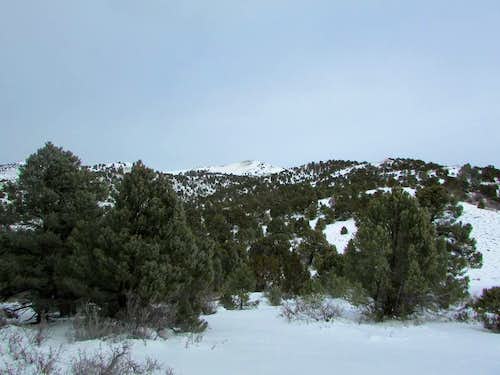 When I found out that summitpost member "professor on the run" was very interested in this area and had spent time in the area, I asked him if he would be interested in adopting this mountain page. He will now be the one providing the information and will be able to  make changes and improvements. If you want to be added to the summit log list,  please send him a note.
If you have a chance to check out his personal blog "professorontherun", its worth a visit and contains a lot of fine information.

Please recognize that the material on this page is provided from the experience of the author for your information only and that venturing into this area is at your own risk. Carry food, water, shelter and be aware that a cell phone may or may not work in this area. Your vehicle will need to be in good condition and high clearence 4WD is necessary. Make sure you have a good spare and a full tank of gas.  Its also a good idea to let others know where you have headed and when you expect to return home.