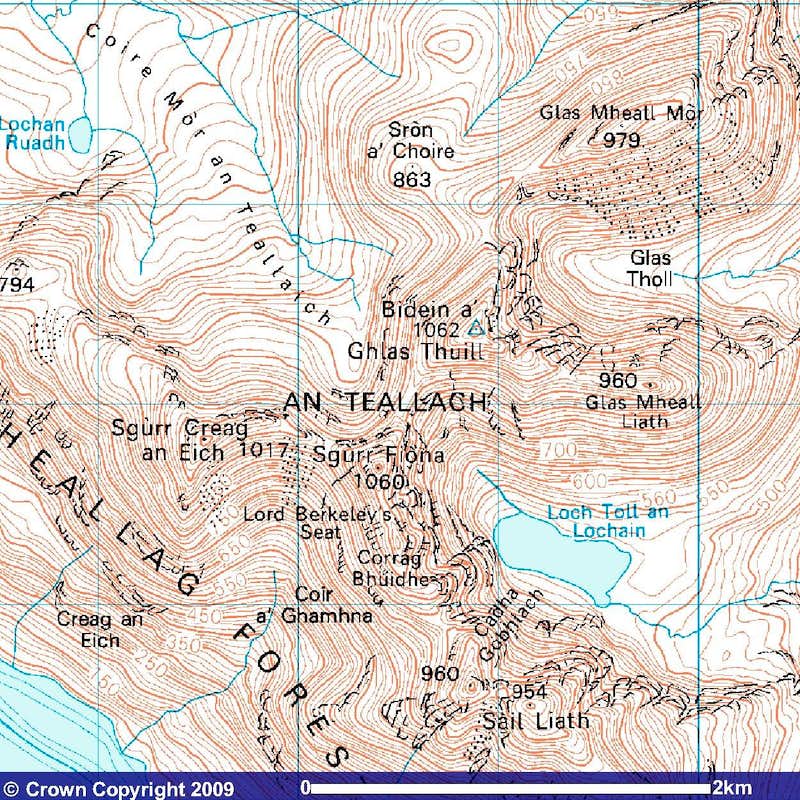 An Teallach is without doubt one of the most impressive group of hills in Scotland. It is located in the Wester Ross region of the highlands, close to Ullapool and easily accessible from main roads.

Within the An Teallach group are nine separate tops with heights over 3000 feet, all are concentrated within an area of 4Km by 2Km.

There is no actual peak called An Teallach, this name refers to the whole group of hills listed below:- 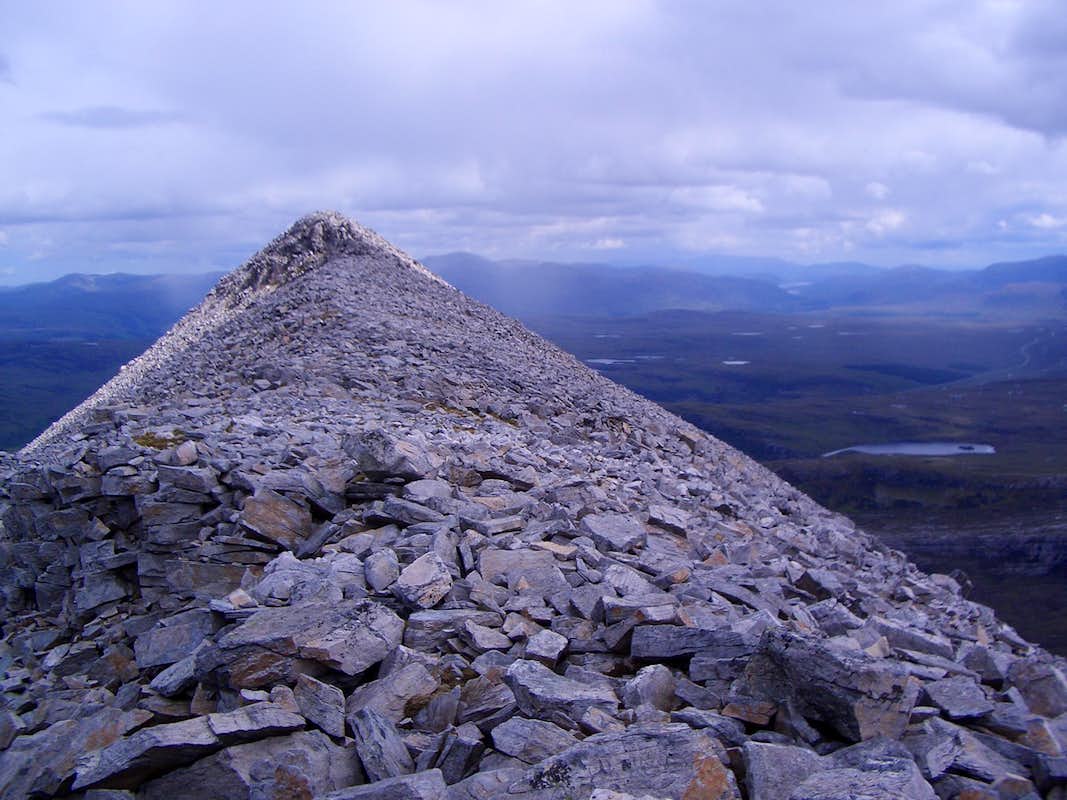 Quartzite on the summit of Glas Mheall Liath.


Each of these tops has a completely different character even though the type of rock is generally the same.

The geological structure of An Teallach comprises of Torridonian sandstone and Cambrian Quartzite.


On the ridge of Glas Mheall Liath, this is particularly evident where the Red Torridion Sandstone contrasts vividly with the light grey to white quartzite. 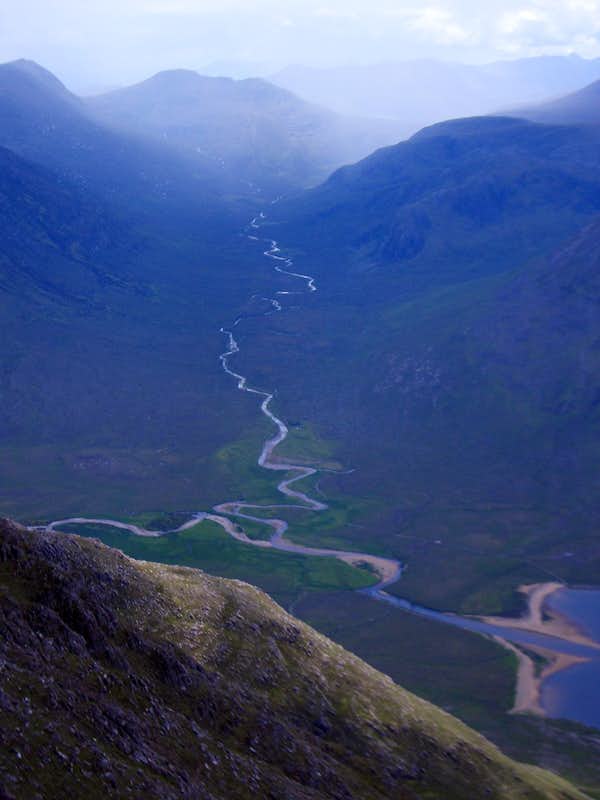 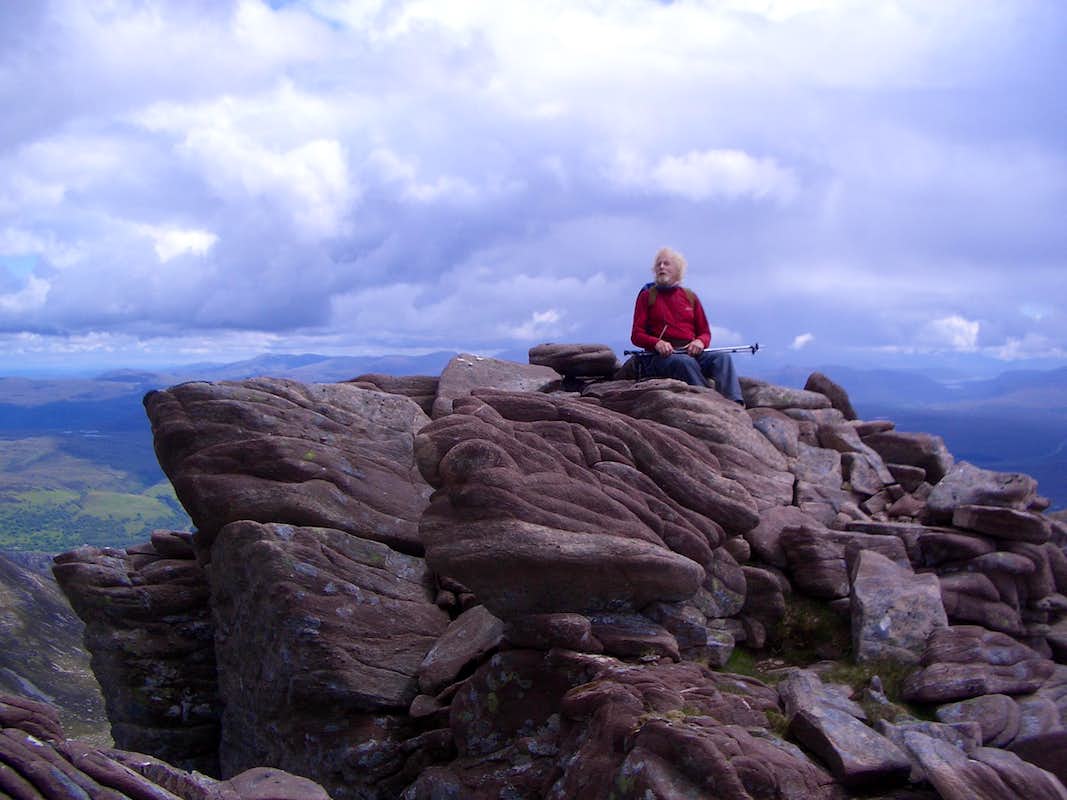 The Torridian Red Sandstone at the summit of Corrag Bhuide


The rocks have been subject to glaciation, erosion and denuding by the grazing of sheep and other animals. In general though the rock is sound in most parts and little evidence of scree (talus) can be seen except on the higher part of the ridges. 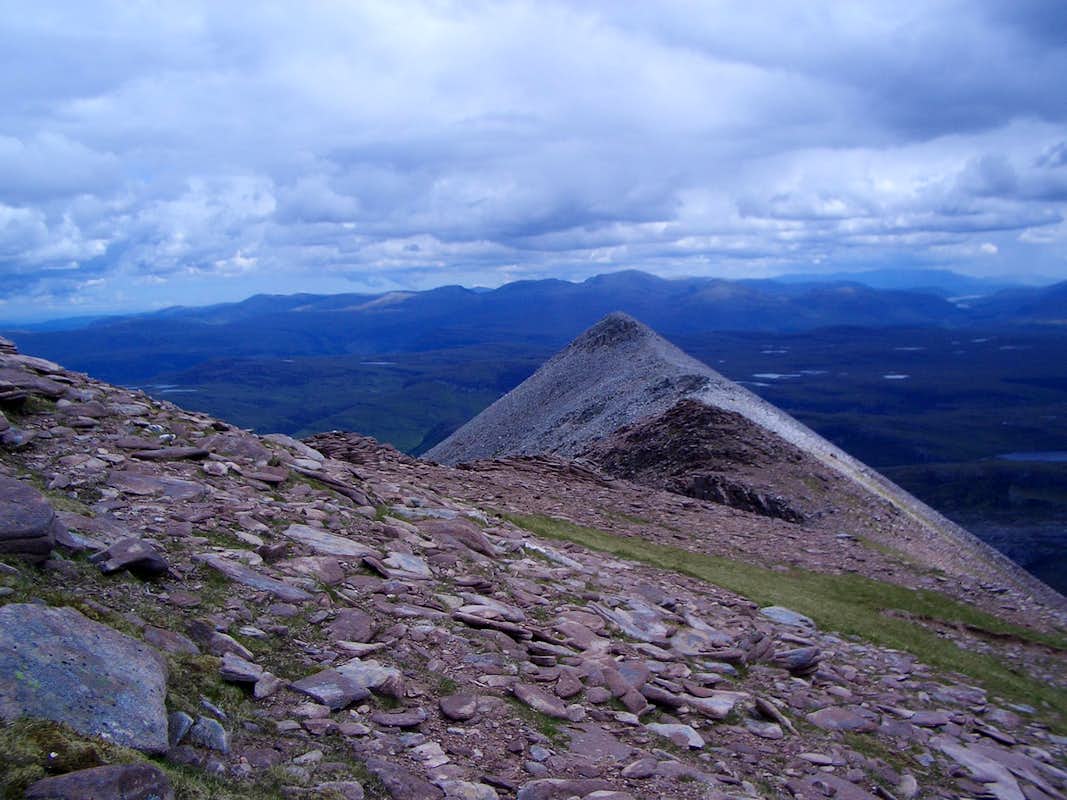 
An excellent example of the typical effects of glaciation can be seen in the glen below Sgurr Fiona. 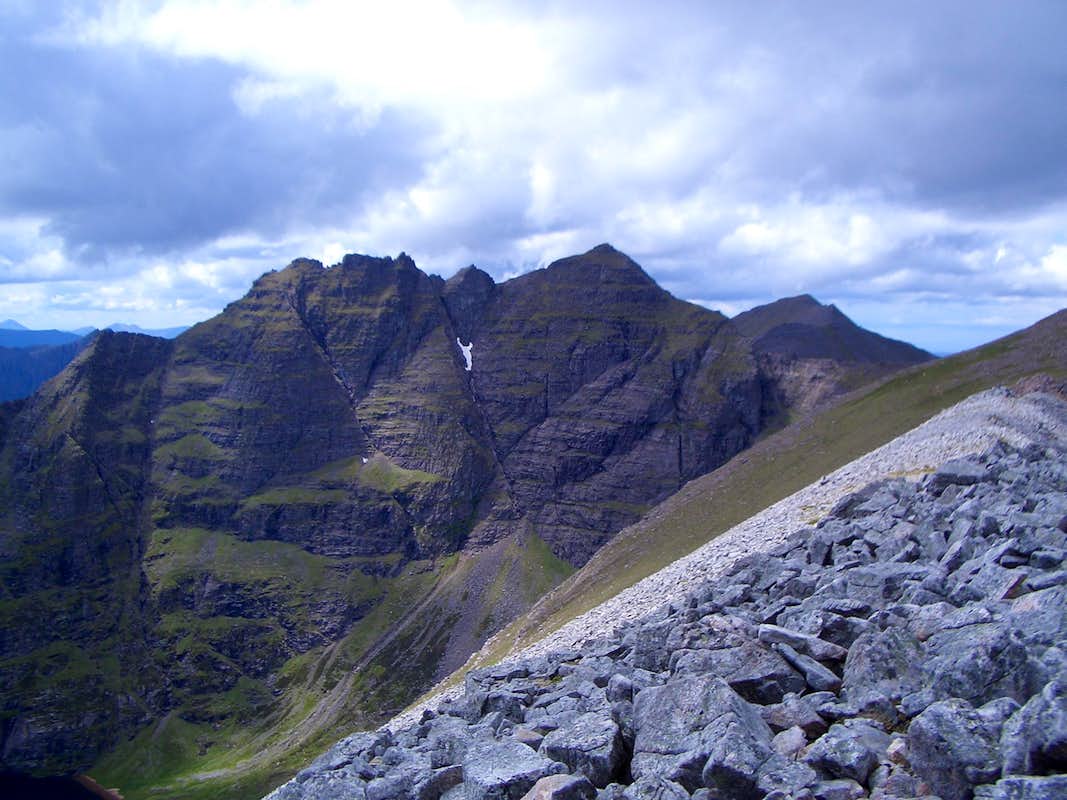 The fine ridge of An Teallach seen from Glas Mheall Mhor.


The section of the An Teallach ridge from Sgurr Fiona to Corrag Bhuide is particularly fine, combining a high level traverse, scrambling up sandstone outcrops and enjoying spectacular views from precipitous heights and also providing a high level path for the more timid hiker. 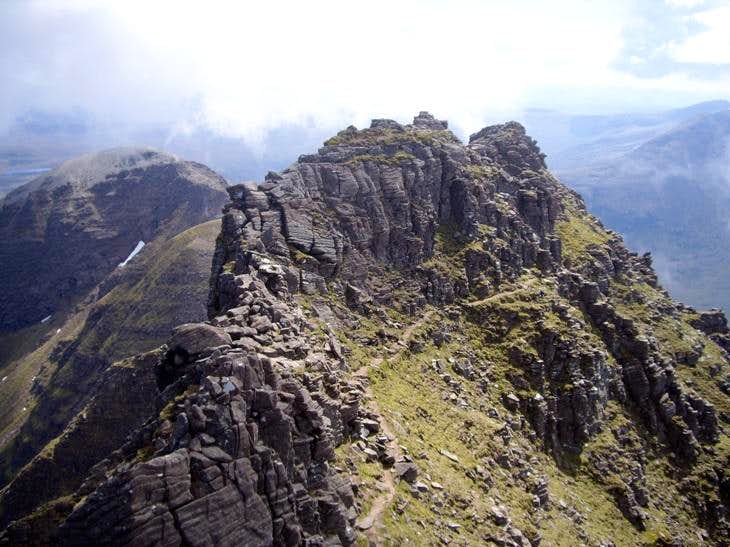 The high level trail around the summit ridge of Corrag Bhuide avoids any scrambling. (Image by daw37) 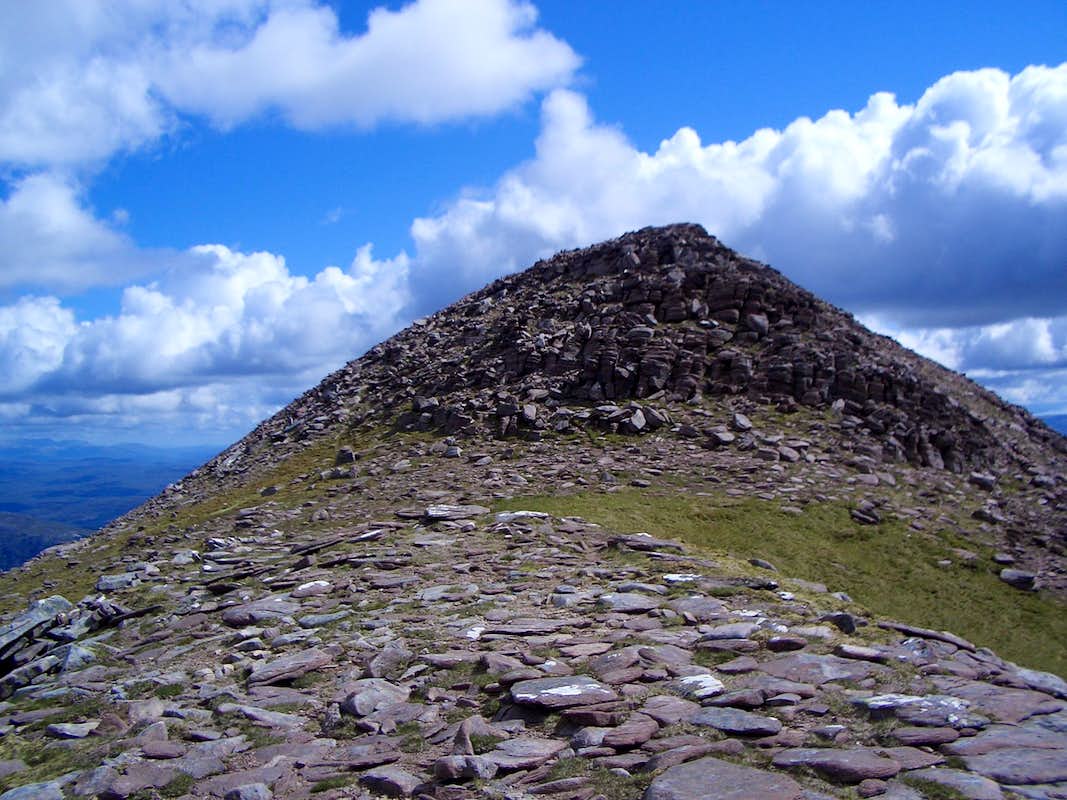 Red Torridian Sandstone on the summit of Glas Mheall Mhor 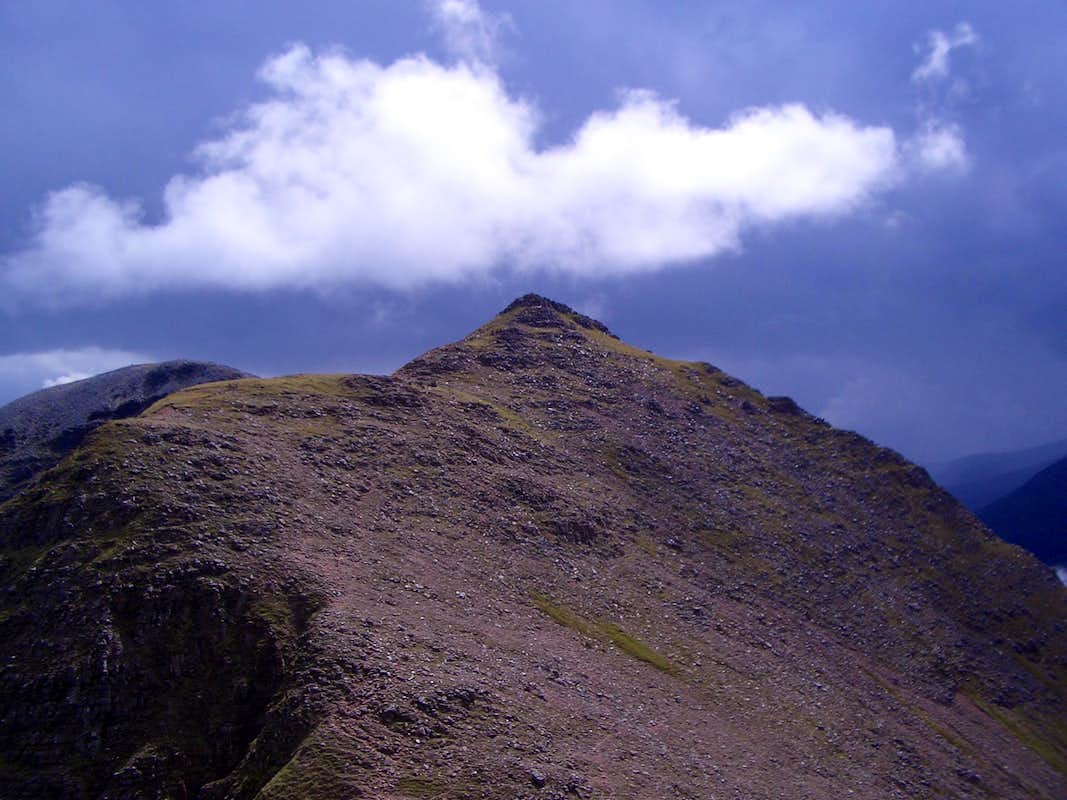 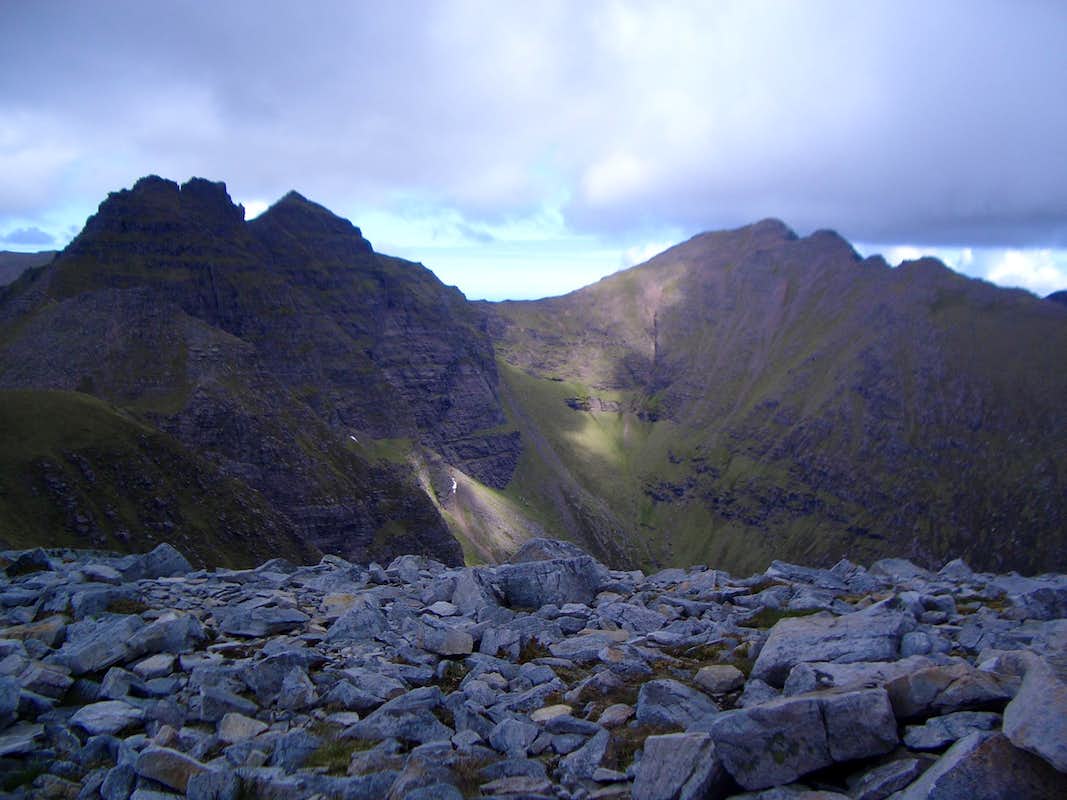 Travel to the nearest access points to An Teallach by road is easiest from Inverness which is easily reached from the south via Perth on the main A9 road.

From Inverness go north on the A862 to Muir of Ord and then pick up the A832 towards Garve. Beyond there is a junction with the A835 signposted to Ullapool. Take this as far as the Falls of Measach and join the A832 again to Dundonnell.

National (Scotland, England and Wales) Rail links exist to Inverness and a rail/bus through ticket scheme operates from there to Ullapool.

Scheduled flights into Glasgow or Edinburgh airports provide access to Scotland but Inverness airport is closer to An Teallach and has scheduled flights from London airports and many European airports using Easyjet and FlyBe airlines.

There is no red tape in Scotland. There is a legal right to roam over the hills and valleys. However, in some areas, deer stalking is carried out at certain times of the year. Although this does not normally affect this particular area, ask locally before you go on the hills.

In some areas temporary restrictions on access may be imposed during bird breeding season, again, ask locally for more details.

Camping and other accomodations

Campsites are located in the area of An Tealach at the following locations:

For general touring and appreciation of the whole of Scotland look at:

For further information go to the Scottish Mountaineering Club website

For details on the classification of the tops listed in the overview, and guidebooks to many areas of Scotland: