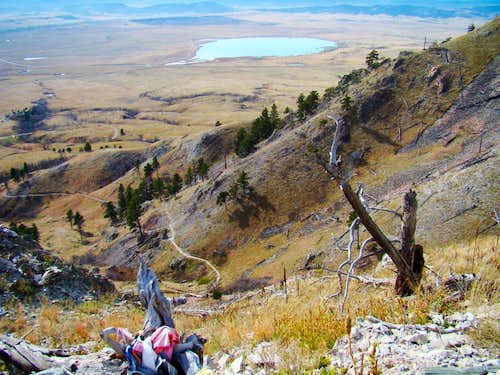 One of the very best hikes in the Black Hills region is Bear Butte, located a few miles northeast of Sturgis. According to Lists of John, Bear Butte has 1,251 feet of prominence, making it the third most prominent summit in the South Dakota Black Hills, and the fourth most prominent in the entire Black Hills (when you add in Wyoming’s Black Hills summits). Only Harney Peak, Odakota Mountain and Warren Peaks (WY) have greater prominence in the Black Hills. Needless to say, the views from this somewhat isolated mountain are outstanding. On clear days, visitors can see into four states from the summit. Plus, some of the more prominent peaks of the Black Hills are visible, including Terry Peak, Crow Peak, Custer Peak and a few others.

Bear Butte has long been held to be one of the most sacred sites of the Lakota Sioux Native American tribe. The Lakota call the mountain “Mato Paha”, which means “bear mountain”. The Cheyenne tribe also holds this to be a sacred place, and calls the mountain “Noahvose”. Visitors to Bear Butte will see many Native American prayer cloths and other objects of worship in the trees on the slopes. Visitors are asked to respect these and not disturb them.

Bear Butte is an ancient igneous intrusion, a laccolith, one of several in the Black Hills region. Bear Butte is the remains of a volcano that did not erupt. The mountain used to be covered by forest, but a major fire in 1996 destroyed most of the trees, leaving it almost treeless. Some new growth of trees is being seen on the mountain, but it will be a very long time before it ever returns to the cover it had before 1996. Note: This page was originally created by SP member Koonsy, who is no longer active in the SP community. 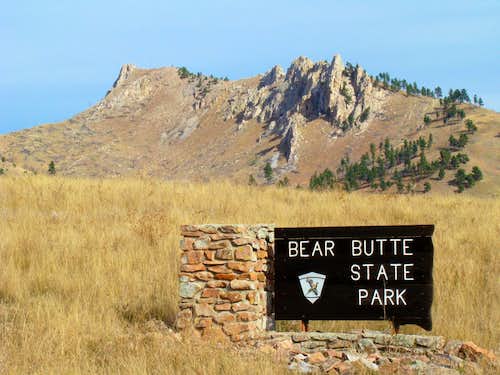 Bear Butte State Park has two sections – the area around Bear Butte and the area around Bear Butte Lake. These two sections are divided by Highway 79. The eastern section is centered around Bear Butte and the park Visitors Center. There is a small herd of buffalo here that roams freely within the confines of the state park. Buffalo are especially protective of their young and are aggressive during mating season. If you see buffalo flicking their tails or rolling their tongues, it may indicate potential aggression. Buffalo can sprint more than 3 times the speed people can sprint. So, buffalo are best viewed from a safe distance.

The National Park Service recommends no closer than 25 yards for safe buffalo viewing. Bring your telephoto lens! Across Highway 79, the west side of the state park is built around Bear Butte Lake. There are 15 campsites there, plus restrooms, picnic area and a boat launch. People fish on some parts of the lake, while others like to water ski. There is a 2.5 mile easy hiking trail around the lake. While there are some trees here, the area is mostly prairie land.

Bear Butte is near Sturgis, South Dakota. From Junction Avenue in downtown Sturgis, travel east on Highway 79 for eight miles, which will turn to the north after a few miles, and you will then be at Bear Butte State Park. Turn right and follow the road to the entrance fee station. The Visitors Center and trailhead is a short distance beyond that.

There is only one trail to the summit of Bear Butte (see map above). From the trailhead to the summit is 1.85 miles. Topo maps show a little over 1,000 feet of elevation gain to the summit. This trail is the northern terminus of the 111-mile long Centennial Trail (Black Hills Trail #89). The trail is well defined and a little rough in places. Along some segments of the trail, there are occasionally steep slopes below. Railings are provided in a few locations. Rattlesnakes live on Bear Butte, and it is not uncommon to see them along the trail or crossing the trail. It’s well worth your time to be on the lookout for them. The state park has placed several benches along the route for hikers to rest at. Because of the lack of trees, there are excellent views of the surrounding countryside along the full length of the trail. At the summit, hikers will find a large observation deck. The brass geodetic summit marker is below the deck, with a small plexiglass window that was intended to show what is there. Unfortunately, foot travel over the plexiglass has scuffed it to the point the marker is unreadable from above. 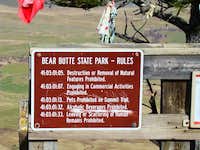 Since Bear Butte lies almost entirely within Bear Butte State Park, all park regulations apply to the mountain. There are also state park entry fees, which can change from year to year. You can view the park regulations and fees by clicking here: Bear Butte State Park Regulations & Fees Firearms and fireworks are prohibited at this state park. And the park has postings against disposing of human ashes. As always, hikers need to pack out whatever they pack in. When visiting Bear Butte, you will see Native American prayer cloths and prayer beads and tobacco ties adorning trees. Please be respectful of Native American rights and do not disturb these. 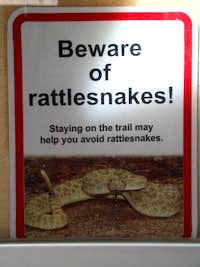 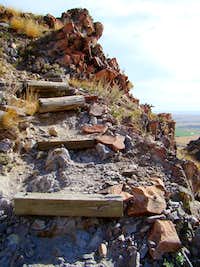 People climb Bear Butte all year. Of course, summer lightning and winter blizzards are not good times. But given the lack of tree shade on the mountain, hikes on cool spring and fall days are normally the most ideal. Some winters in the Black Hills have proven to be pretty mild, allowing many winter day hikes to be quite enjoyable. If you hike in the summer, please take plenty of water with you. The summer sun exposure will dehydrate you rapidly, if that is when you choose to hike. Early morning hikes in the summer will help beat mid-day heat, but are also the time the rattlesnakes may be more likely to be on the trail. Please note that the park visitors’ center is closed over the winter. For more information on weather conditions and weather forecasts, click here: 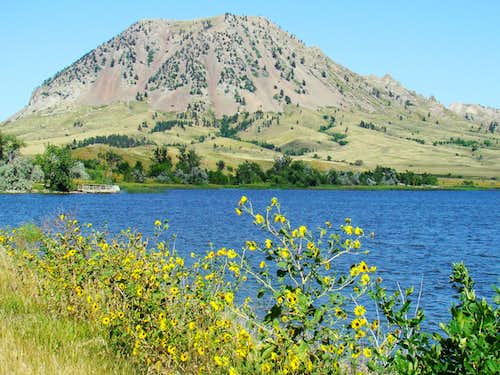 There is a campground at Bear Butte State Park, as well as campgrounds in nearby Sturgis. One can also camp in the Black Hills National Forest, to the west. The town of Deadwood is not far away, and offers some limited camping facilities there as well. For more information on any of these options, click on the links below: