Turret Peak is a little known thirteener that resides in Wyoming's rugged and remote Wind River Range. Steep and rocky on all sides, this complex mass of ribs, towers and couloirs promises to challenge any climber who wishes to discover its well kept secrets. Situated at the end of the southeast finger of Dinwoody Glacier, Turret Peak lives a humble life, its impressive ridges seemingly doomed to be forever neglected in favor of the gentle-sloped giant, Gannett Peak, across the way. 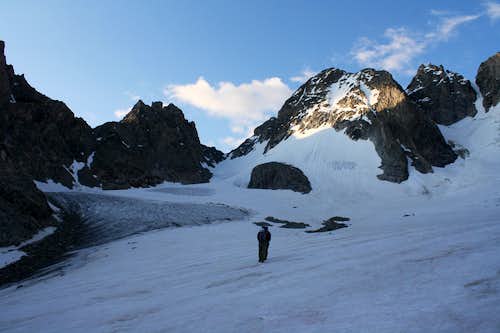 Despite being the sixth highest mountain in the state, Turret Peak receives very little attention from climbers. The approach is long, there is almost no information on potential routes, and there doesn't seem to be a particularly easy way to the top. The sole objective of nearly all climbers who make the long trek to Dinwoody Glacier is of course popular Gannett Peak, the highpoint of Wyoming.

The top of this aptly named peak is comprised of several distinct towers and the highest point is certainly debatable when viewed from a distance. Both guidebooks listed at the bottom of this page state that the southern summit is higher, but this is complete garbage. We found it rather obvious that the northern summit was higher and confirmed our suspicions by hand leveling from both summits. As if further proof was necessary we found the northern summit to be home to a large cairn and a register. One wonders how the authors could describe several routes to the summit and not know where the summit actually is! When we opted to climb the west ridge it was largely because we believed it would take us directly to the true summit without having to negotaite time-consuming gendarmes. Choice words were uttered upon the discovery of this misinformation.

Turret Peak can be climbed from Dinwoody Glacier using one of the popular approaches for Gannett Peak:

1. Glacier Trail – The standard route for climbing Gannett Peak and perhaps the best approach for attempting Turret Peak as well. Follow the Glacier Trail for 24 long but easy miles to the edge of Dinwoody Glacier where several good camping opportunities exist. In my opinion this the best launching point for a climb of Turret Peak. See the Glacier Trail route page for more information.

2. Titcomb Basin – This alternate approach is a few miles shorter but requires going up and over Bonney Pass. See the Pole Creek Trail/Seneca Lake Trail/Indian Pass Trail route description for details. Fast parties could make a day trip of Turret Peak from upper Titcomb Basin but I don't recommend it due to possible routefinding issues that could make the climb longer than anticipated. The terrain can be a bit confusing.

An alternate approach via Helen Glacier is also a possibility but I have no information about it.

Kelsey lists six routes on Turret Peak. See his guidebook for terse descriptions of each.

I relay firsthand information on Kelsey's Southwest Ridge route (or the variation I climbed) on the West Ridge route page. I'd love to hear what you know about any of them!

Sarah, I climbed the north ridge from backpackers pass, enroute to Sunbeam and Febbas afterwards, and the lower part of the ridge is definitely the crux. Getting around the low cliff guarding the upper north ridge can be done one of two ways. Option 1 - You can traverse a small ledge starting a few feet above the pass below the cliff and making a slabby, exposed traverse around its base to easier south facing terrain after rounding a steep rib. There is a very exposed 6 foot step you climb just before reaching the rib that required a hand jam...probably one low 5th move, and the slabs being so covered in lichen would be death defying if wet (which they were still damp on our ascent due to rain the whole day before). Option 2 - You can climb a steep, narrow gully to the left of the cliff visible from the pass, as it looked like this would meet the north ridge above it. It did, but there was a couple low 5th slabby, wet moves to bypass a chockstone in the gully. I took this gully up, and the first option down. The rest of the route was class 3 following the more mellow and broken, talus strewn upper southwest facing aspect 10-30 feet below the crest. A small horizontal narrow section of ridgecrest is encountered shortly before the summit and ends at a notch, where the final 100 feet or so ascends class 3 rock back on the left (east) side of the crest. This was a really fun route actually, and only took about an hour and change round trip from Backpackers Pass once we waited there for 3 hours to let the rock dry!