Mount Phelps (incorrectly named"McClain Peaks" on the USGS map) is arguably the most prominent looking summit visible when looking east from the Bellevue-Kirkland-Redmond area. I see it many days, and had wanted to climb it since climbing Lennox Mountain in May 2005.


This area is rich with mining history, and the standard route up Phelps starts at the Blackhawk mine. There’s a dug out area, but nothing much to see at the mining site. (If there were gold/silver nuggets laying around, would I mention it here?)

I made my first attempt on June 7, 2008, and was turned around at the end of the south ridge purple route (see TOPO! map below) after witnessing a loose slide avalanche come down the gully. I successfully reached the summit via the yellow and red routes on June 13, 2009. They both go pretty well on snow, and I’m curious to see what the terrain looks like in late season. I’ve included a few pictures from the 2008 and 2009 trips.

Phelps’s little brother, called “Little Phelps” by Beckey, is high on my list for 2012. It’s also called “McLain Peak”, and the only successful beta I’ve found on it is on the RhinoClimbs website.

bigjoesmith's TR confirmed that climbing from the west via logging roads isn't a walk up, and probably worse than the more direct route described by the RhinoClimbs account.

If you have beta on Little Phelps, please post it as a comment to this page or send me a PM. Also, let me know if you also are interested in attempting this climb in 2012. 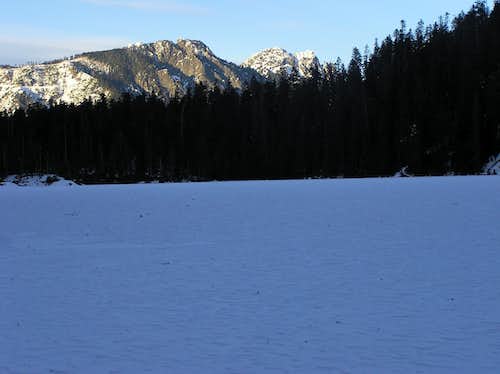 Little Phelps, left, and Mount Phelps. Notice the notch just to the left (west) of Little Phelps's summit. Taken from the south on Loch Katrine, Feb 2006.

Follow the Lennox Mountain “Route from the West” approach from North Bend.

It appears that the approach road is in good shape now, March 2015, and the pictures from my 2009 climb are obsolete.

3/8/15 kevinsa summit log signature says road is open to the TH, but cars with poor clearance may need to park 0.4 mi away.

10/10 Update: bigjoesmith's trip report states that he was able to drive to the "wash3" way-point, and he summitted in three hours from there.

7/30/10 Update: According to Seattle Mountain Rescue, there has been a lot of road repair work, and you can drive to the Bare Mtn (Lennox Mtn) turnoff. Call the North Bend ranger station for details.

5/31/10 Update: Eric posted a link to his route under the climber's log. This is probably a better alternative now that the road has multiple washouts. If you can confirm a good shortcut for getting to the mine, I'll post that here. Also, I'll post any updates to the road condition.


On 6/7/08 snow forced us to park near waypoint “wash2.” Last winter was very hard on the approach road, and it has sustained serious damage at wash1, wash2, wash3, and wash4. My guess is it will never be repaired (I was wrong! See "Getting There" section above), but you should be able to drive past the left turn onto FS5730. (If you continue straight at this fork, you drive off the bottom of my map, and head to the Lennox Mountain TH.) From the left turn onto FS5730, it’s about 3.75 miles to the Blackhawk mine spur road, 2550’. The Wagner bridge was repaired in the spring of 2008, and the Sunday Creek bridge was being repaired last summer, forcing us to park south of it. You should call the North Bend ranger station to check the latest conditions, since the approach could be the crux: 425 888-1421.

Assuming you manage to drive/bike/hike to the Blackhawk mine spur road at 2550’, you have about 3000’ left to the summit. After a short distance, the road comes into a clearing, the Blackhawk mine site. Continue to the far (north) side of the clearing to see a dug out area, but don’t bother taking your camera. After entering the open area, find the trail going right. It starts out pretty well, and then can be difficult to follow at times.

Try to stay on it to minimize the hassle of getting through the lower clear-cut section. Look for rock cairns on top of stumps. It’s not too bad. Eventually you get into the uncut forest before getting to waypoint “ROCK” at around 3800’. This is the location of a rock outcropping, and the beginning of the south ridge.


Follow the south ridge to about 4800’ where steeper, slabby rock forces you toward a gully on the left. I’ve never summitted from this direction, but it looks like you can traverse toward the SW ridge on the dotted purple route, and then continue on to the summit using the red route.  Update: A 2015 Mountaineers TR describes traversing left under rock buttresses from the purple to red route around 4900', which is consistent with the dotted purple line.  The same report descended on the SW ridge red route, and found significant brush with the snow gone.  If climbing without snow, the purple route is the best choice.


From the ROCK waypoint, traverse left into the basin, aiming toward the 4200’ Phelps-McLain saddle. If you climb too fast, you will need to drop back down (yellow route), or continue up the basin/gully following the dotted yellow route on the east side of the ridge gendarme.

Higher on the mountain there are places where the slope gets to 30-35 deg, and I clearly remember one place where it looked like run-out was poor. Like the south route, good snow travel skills are required for an early season ascent.

If you want to spend the night in this area, the 4200' saddle has some flat ground. I can't recall any other places that looked suitable for camping.