The Untersberg, which is split up between Bavaria in Germany and Salzburg in Austria, is more something of a small massif rather than an individual mountain. It forms for the largest part a high plateau which starts in the west on average 1500-1600 meters and rises steadily towards the east, where it reaches its highest points at 1800-1900 meters average and then drops steeply, in many places with formidable cliffs, to the valley connecting Berchtesgaden and Marktschellenberg. The highest point on the Untersberg is the Berchtesgadener Hochthron with 1972 meters in altitude, next is the Salzburger Hochthron, 1853 meters, and apart from that there are many other less important elevations, though all in spectacular scenery, between 1700 and 1800 meters.

The Untersberg is geologically part of the Kalkalpen - the sedimentary Alps - and its rocks consist therefore mainly of chalk and limestone. Similar to the Dachstein and the Tennengebirge, a whole system of subterranean caves has been carved by water into the inside of the mountain. There are natural holes in the plateau that can reach a depth of more than 300 meters, and latest investigations have brought forth the conclusion that there is a subterranean lake deep down in the mountain. 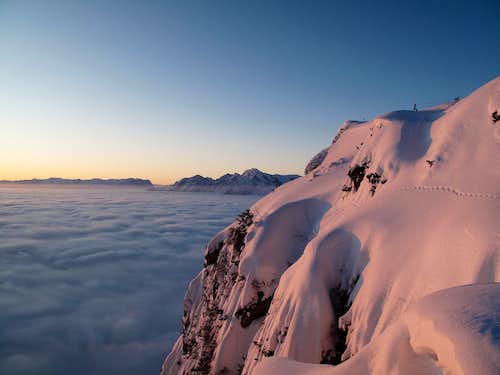 Sunrise pink on the Geiereck, with view over the fog to the Hoher Göll

For at least 2000 years, the Untersberg was a very important source of marble. During the medieval age and until well into the 19th century it was for Germany and Austria what Carrara is for Italy. The Untersberg marble, being of the finest quality and beauty, was in highest demand throughout German-speaking Europe. To this day, there are several quarries on the north-east side of the mountain from which marble is being excavated. For more detailed information upon this topic, check out the link indicated in "External links".

The Untersberg has been throughout the centuries a mountain veiled in mystery. There are numerous legends ranking around this mountain, many of them quite fantastic, dealing with elves and dwarfs, a secret kingdom deep inside the mountain, and, interestingly enough, many of these legends also tell about people who got lost inside the mountain and underwent experiences of time aberration. A lot of literature has been written, by scientists as well as by historians, about the "mysterious Untersberg". 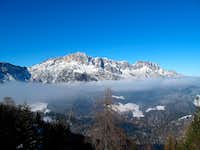 The Untersberg, seen from the Kneifelspitze above Berchtesgaden 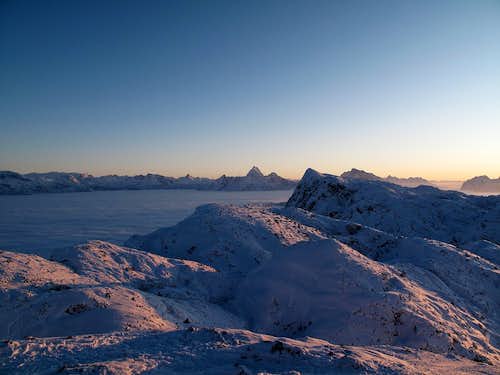 The Untersberg plateau and the Berchtesgaden Alps in sunset colors 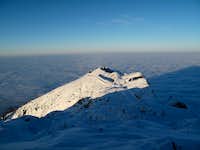 Coming by car: Take the motorway from Munich to Salzburg (140 km). Depending on where you want to start, either exit the motorway at Bad Reichenhall and follow the signs to Berchtesgaden (west side of the mountain) or cross into Austria, follow first the signs to Villach-Klagenfurt and exit at Neu-Anif following the signs to Berchtesgaden (east side of the mountain, via Marktschellenberg). The cable-car leaves from St. Leonhard, which is the last village before the national border.

Coming by means of public transportation: There are regular direct trains both from Munich and from Salzburg via Freilassing-Bad Reichenhall-Bayrisch Gmain-Bischofswiesen (west side of the Untersberg) to Berchtesgaden. There is also a regular bus that serves the Salzburg-Marktschellenberg-Berchtesgaden line (east side of the Untersberg; if you intend to go up via Toni-Lenz-hut - ice cave - Mittagsscharte, alight at the bus stop "Eishöhle", where there is also a car parking, which is before Marktschellenberg, if you're coming from Salzburg).

There are many ways to hike up, be it from the north (there are two paths from Fürstenbrunn in Austria, one is the normal path up the easy slope via Zeppezauer hut, the other the very popular Dopplersteig that also leads to the Zeppezauer hut and Geiereck, yet through a quite exciting rock passage), from the east (Marktschellenberg in Bavaria - Toni Lenz hut - ice cave - Mittagsscharte saddle - summit), from the south (Maria Gern just above Berchtesgaden in Bavaria - Stöhr hut - summit) or from the west (German side: From Hallthurm up a very steep path to the Stöhrhaus and to the summit. Austrian side: From Grossgmain over the entire plateau either to the Mittagsscharte saddle and from there turn left and rise to the Salzburger Hochthron, or follow the path that leads straight to the Berchtesgadener Hochthron.

Generally, if you start from right below in the valley, there is average 1300 meters of height difference to be accomplished, so, in general, calculate with at least 4 hours for going up.

My favorite way of hiking on the Untersberg so far has always been: Take the cable-car (Untersbergbahn) from St. Leonhard to Geiereck, then follow the trail leading to the Salzburger Hochthron. From here, the path continues along the highest points of the crest and then does a nearly 200m-descent to the Mittagsscharte saddle. From here, the path rises on the opposite side again - we are now entirely in Bavaria - to more or less the same heighth as before and continuously follows the highest points of the plateau (the view over the Untersberg plateau is very impressive!) in an interesting up and down through a wild landscape of shrubs, steep walls, scree and occasionally natural caves. After about two and a half hours the summit of the Berchtesgadener Hochthron is reached.

From this summit, one enjoys a gorgeous view to the entire Berchtesgaden Alps as well as to the Dachstein, the entire mountains of the Salzkammergut and the Bavarian-Tyrolean Alps. From here, descend in about 10-15 minutes to the Stöhr hut, turn left and follow the path leading down to Maria Gern in about 2 hours (the view upon the east wall of the Berchtesgadener Hochthron is awesome!). The descent to Hallthurm on the other side of the mountain is less advisable, as it is of a relentless and extreme steepness and landscapewise not very rewarding.

The Untersberg is also very well known among climbers. The formidable south and east walls of the Berchtesgadener Hochthron have several routes of the most extreme difficulty, right up to grade IX. As I am not a climber myself, I would be grateful for some additional information on this behalf. 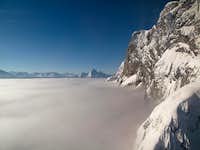 The east wall of the Untersberg 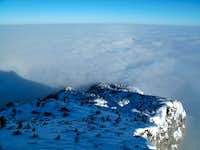 The northeast section of the mountain with the Zeppezauer hut, seemingly sinking into the ocean of fog

The Untersberg is under natural protection. For this reason, but also for reasons of safety, do not leave the marked path, particularly when you're on the actual plateau! There are holes in the mountain, as mentioned above, that can go down as deep as 300 meters, and oftentimes they are invisible because covered by shrubs. This is a warning that should be taken very seriously.

The Untersberg on Wikipedia

Stöhr hut (only in german)