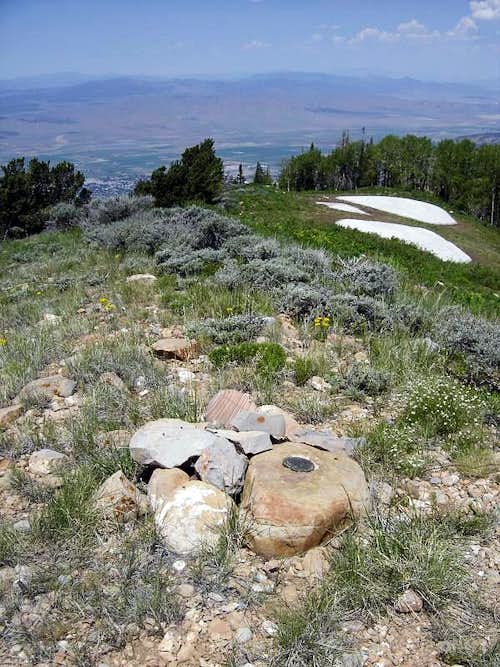 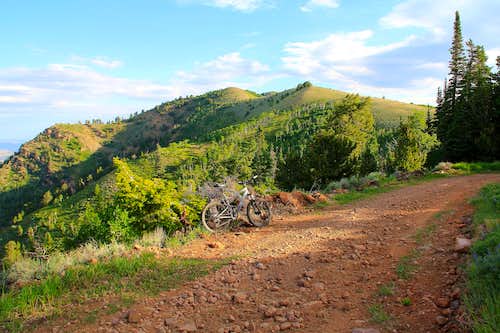 "biking" it pic by mountaingazelle 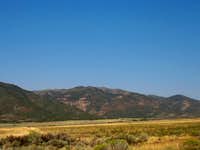 If you are a lifelong Utah resident, I'm willing to bet that you have not heard of this peak, even though you have probably looked at it many many times as you've plied I-15 between Salt Lake City and St. George. I would be the first to admit that I wouldn't have heard of it if I weren't into chasing the prominence peaks of the state of Utah and so not knowing where the heck this peak is very understandable to me. This peak is also referred to as Salt Benchmark on Greg Slayden's excellent webpage, peakbagger.com but for this page, it'll be referred to as Salt Creek Peak.

Salt Creek Peak is the highest peak in the San Pitch Mountain range that is just south of Nephi Utah. The majestic Mt. Nebo massif is just north of the San Pitch range and is intersected by highway 132. Salt Creek Peak comes in at #21 on the Utah top 100 prominence peaks with 3697 feet of prominence. If you look at the log of those who have signed the summit log at Lists of John Salt Creek Peak page, only Kadee is a homegrown Utah resident, the rest of those on the list came from somewhere else with three of the signees from Arizona with three from California. The other three are transplanted from Washington state within the past three years. One more is a Vermont native, SP member Greg. So I personally know only one person that is officially from Utah although I am sure many of you who are reading this page might say, "hey, I've been up there too". We'll soon know who you are if you would be so kind as to sign the summit log on this page. Not everyone belongs to the "Lists of John" website.

The name of this peak is drawn from the name of the canyon which is located nearby. A tragic event happened near Salt Creek Canyon back in 1855 and you can find out more by accessing this link.

Mountaingazelle shared this information on her superb Wasatch Range(south) page:

"The San Pitch Mountains are the southernmost extension of the Wasatch Range. They are located to the east of Interstate-15 from Nephi to Gunnison. If you have a high clearance 4-WD vehicle, you can drive close to the summits of all of these mountains. Dirt roads lead to the top of the ridge and many side roads are located across the entire range. The highest mountains rise above 9,000 feet at the north end and become lower toward the south end of the range." Click Here.

From I-15 at Nephi, head east on Highway 132 and before reaching a small town called Fountain Green, there is a sign to the right for Log Hollow. This sign is located about halfway between mile markers 44 and 45. Log Hollow is the best way to access Salt Creek Peak so turn right and follow this road to the base of the mountains, into the canyon and up to the ridge top. The road is more suited to high clearance vehicles and is popular with ATV vehicles on the weekend. When you hit the top, there will soon be a junction with a road that comes up from the south but stay right. I personally would recommend parking near this junction (at 9200') and would either hike or mountain bike the road as it turns to the north. You can continue the drive but the road (when I was there) becomes very rutted initially and narrows down somewhat making it more realistic to manage in an ATV or a vehicle smaller than my 2005 Tacoma. I know you can drive it but you'd feel like you earned it more if you parked and began from there which is what I did as the initial part was a muddy mess. More on the route below. The road goes right to the base of the highpoint which makes this an "easy" peak if the conditions are right. Early in the season you will most likely encounter snow which could be a stopper but again, my suggestion is that you hike it from the junction as mentioned before.

The road that heads south from the junction leads to Maple Canyon, which has a campground. However, this road is much rougher than the Log Canyon way and having driven both roads, I really prefer the Log Canyon way. Both Eric Willhite and John Vitz also preferred the Log Canyon road. However, if you are looking for a campground, then Maple Canyon might be your choice. The road leads through the campground and then steeply up to an overlook. From there keep to the road as it heads north, avoiding one signed left turn that drops down to the west. 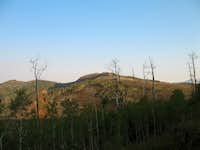 While you can drive to the base of this peak and that alone can minimize the effort, a better plan is to hike or mountain bike to the summit. Early in the season, snow will most likely still block the road and if wet, you will have to deal with muddy sections causing you to need to hike it anyway but later in the season when the road is clear and there is no threat of a thunderstorm or recent rain, a high clearance vehicle can make the drive. There are a couple areas where you wouldn't want to meet another vehicle.

If you follow the road, you will end up at the base of the peak which is then an easy hike of less than 400 feet up to the summit where you will find a register and benchmark. The benchmark is on a rock that makes for a great place to sit. My next visit will avoid hunting season. If you hike the road or go cross country, expect a round trip effort of over eight miles. At least by hiking it from the junction, you will feel like you "earned" this one. 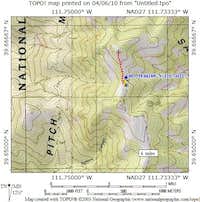 This one gets a fair amount of visitors, both peakbaggers and hunters. In hunting season, it is heavily hunted by bowhunters and in rifle season, be sure to wear orange. Thanks to the logs at both peakbagger.com and Lists of John, I am aware of over 30 peakbaggers who have been to the top of this one.
There is a central benchmark on a rock near the summit and a register as well.

The peak is in the Uinta National forest. For more information,
contact: 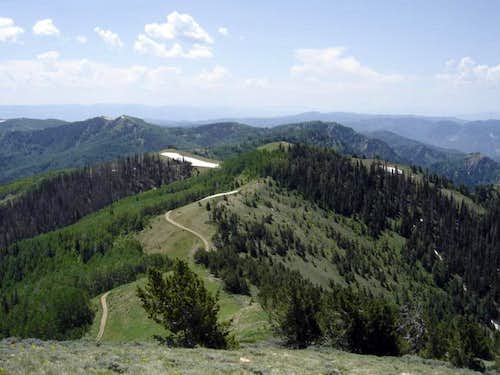 Additional tid bitsHistory (thanks to Wikipedia)

On 14 June 1849, Ute chiefs Walkara and Sowiette went to the Salt Lake Valley to ask Mormon leader Brigham Young to settle a group of his people in the valley of Sanpitch,[4] about 125 miles to the south. Wanting to honor their request and needing to found new settlements where the quickly-growing population of Salt Lake could expand, Brigham Young sent a party to explore the area in August of that year. It was deemed favorable to settlement, and Brigham Young called Isaac Morley to organize about fifty families to move south and settle "San Pete."[5]

The settlers arrived in the valley on 19 November 1849. They numbered 224 men, women, and children and were led by Isaac Morley, Charles Shumway, and Seth Taft. After some debate, the first settlement in the valley was established on the present site of Manti, Utah.[6]

More on the above can be found HERE.

Within the canyon are miles of near-continuous vertical cliffs located near the main road. The cliffs are a conglomerate rock, which resembles a cobblestone surface, which offers lots of hand and foot holds to make climbing challenging and fun. In more recent years, the canyon has become popular with ice climbers.

"Maple Canyon is famous for its conglomerate cobble rock climbing. In winter, several ice routes form on these walls. There may be over 50 routes that develop during a good snow year. The most popular routes are in the Main Canyon, Box Canyon, Left Hand Fork, and Right Hand Fork. To get to Maple Canyon from Salt Lake City drive south on the I-15 until Nephi. Take exit 225 south east towards Ephraim/Manti. In Fountain Green you'll see a sign for Maple Canyon, just start following those. From Ephraim you head back along the 132 to Moroni. In the city of Moroni, you'll see a sign pointing toward Maple Canyon. It is recommended that you have a 4-wheel drive vehicle to drive into the canyon. You will usually have to hike or ski in to approach the ice routes."

For a tremendous resource, see her SP page for the Wasatch Range (south)

Thanks to a peakbagger extradordinairre, SP member Eric Willhite, for loaning me some pictures for this page and he has put up an excellent resource with maps and a description of his visit to this peak. LINK

My pictures of my summit visit did not turn out thanks to having the camera set on the wrong setting. Doh. I now double check that setting whenever I take pictures but since I'll be returning to this summit with a friend in the near future, I will be able to update the pictures that are now being used for this page. A rather bellicose bow hunter had "staked" out the summit area during my visit so I didn't stay long anyway. Most hunters are great people and I almost always have an enjoyable conversation with them but this guy was a piece of work. Enough said.