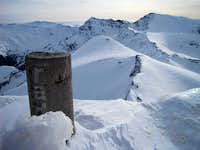 Views from the top

The Veleta is a very popular mountain too. It has a very characteristic shape when seen from the nearby city of Granada. The final meters to te summit project to the east like a ship's bow, with sheer rocky drops to the north, east and south. It is easy to recognize from far way and from all the sides. This pointed end of the mountain has become a kind of 'sign of identity' for Sierra Nevada and it is represented in many merchandising of companies in Granada and surroundings.

Its popularity has to do too with the proximity of the ski resort of Sierra Nevada. Pradollano, with its houses and lifts reach up till 2.500 meters. From here one can get a ski lift whose upper stop reaches the 3.200 meters. This network of human structures (including asphalt and dusty road which reaches a height of 3.100 meters) and the accessibility of the easy NW slopes makes its summit available for everyone, especially in the months free of snow and ice. On the weekends there is a long row of hikers that reach the summit to enjoy wonderful views of the range's main ridge, Mulhacén and Alcazaba included.

For 'real' mountaineering it's possible to hike up this mountain all the way up without the help of ski lifts without not so much difficulty. 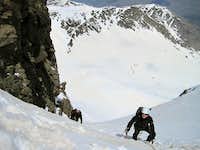 Pico Veleta has many routes on all its faces and slopes. All of them are very different: hikes, rock climbs, ice and snow climbs,... The difficulty of the routes also changes, depending on the season and the conditions. Here there is a general view of all the main routes:

- Normal route: north west slope. It is an easy hiking without snow and ice (from June to November. There is an asphalt road (used for the vehicles of the ski resort) which reaches almost till the top. The asphalt turns to a dusty road on the final meters (around 3.100 m high) and reaches a high pass, known as 'Collado de la Carihuela', a few meters westwards from the summit. In the summer there is a service with the ski lifts and with vehicles of the ski resort which can bring hikers till a couple of hundred meters under the top. The most used path goes directly over the NW slope short-cutting the many bendings of the asphalt road.

- North couloir: It is a very complete route that reaches a pass at 3.300 meters, just below the rocky summit block. It involves an approach over the normal route till an abseil point on the north ridge. It is followed by a traverse at the foot of the north face, and a steep couloir (sometimes with ice up to 50 grades) which ends on a pass/shoulder at the east side of the top. From this point there are many lines to gain the top. All of these lines involve a scramble or a rock-climb (sometimes mixed terrain) over the rocky summit block.

- Olmedo: rocky route on the final summit block. It raises directly from the shoulder/pass at the end of the North Couloir route, at the east side, to the very top. 2 pitches. Maximum IV grade climb. Sometimes it can be iced.

- Fidel-Fierro: rocky route on the final summit block. It starts after a short traverse (30 meters) on the southern rocky face of the top. It involves a scramble with some III grade climbing movements. It can be mixed terrain from November till May.

- Silvia: rocky route on the north cliffs of the mountain, which ends westwards from the top. It requires 5 rope pitches. 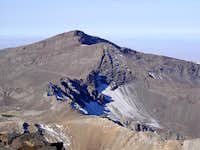 Veleta from the east

There is a bivouac at high altitude very close to the top. It is a tunnel-shaped solid construction known as 'Refugio de la Carihuela', at 3.100 meters high, just few meters away from the pass known as 'Collado de la Carihuela'. This shelter has two shelves covered with wood with a place for about 12 persons. It also has a table and some seat places. The refuge is closed with a door. It has no facilities like matrasses, blankets, chimney, etc... but, despite it is constructed in one of the most windy places of the whole Sierra, it's an excellent shelter.

In the ski resort of Pradollano, and at an altitude of 2.500 meters, there is a mountain hotel called 'Albergue Universitario'. It is the property of the University of Granada, but it offers its services to all visitors. This place is located in a place called 'Hoya de la Mora' and next to a very characteristic rock formation, known as 'Peñones de San Francisco'. Here one can find private rooms (with beds, blankets and sheets) with communal douches and WC. There is a service of restaurant and breakfast included in the price. 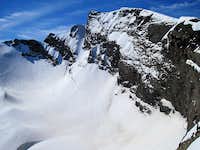 Northern slopes and colouir in winter

The starting point of all the most walked routes to Veleta is the ski station of Pradollano, over the 2.000 meters and up till 2.500 m.

Getting to the ski station isn't very difficult. There are two cities nearby which have an international airport: Granada & Málaga. The airport of Málaga is farther away than the one of Granada (which is almost at the foot of the range) but the airport of Málaga is one of the best connected with Europe with daily flights.

From the airport of Granada there is a bus that drives to the city center of Granada, and from there there are bus connections to the ski resort of Pradollano (approximately 35 km from the center).

From Málaga's airport there is a bus to the central station of busses at the city center, and from here there are many busses which ride in about 1 hour 45 minutes to Granada bus station.

It's also possible to reach the ski station of Granada (Pradollano) with private car in about 40 minutes from Granada center, driving over a mountain road. This road can be driven till a height of 2.500 meters, till a place called "Hoya de la Mora", where there is the 'Albergue Universitario', a private mountain hut which can be a perfect base for the trips to Veleta. Further over the road it's close to non-authorized traffic.

The best maps of the area are:

- Cartography of the Instituto Geográfico Nacional, at 1:25.000 scale

There are some interesting sites for hiking in the Sierra Nevada and in the Veleta mountain: