Freedom Peak (also known as Little Navaho on various sites) is located in the Teanaway is a special little summit located near it's larger neighbor Navaho Peak. The characteristics are much different from it's larger neighbor in that Freedom Peak end in a point where Navaho Peak is much more rounded. Ideally the best time to climb this mountain is in Mid-April to Mid-May when there is snow on it. The big reason is the rock here is not of the best quality to scramble on and although the peak is Class 2 when snow free I think it is best to hit in Mid April to Middle May for a number of reason.

The biggest reason to hit this peak at this time is because the last little bit is a nice 25-30 degree snow-climb / side traverse. If the snow is solid, this mountain is easy to kickstep all the way to the summit. There are also a number of good glissading opportunities from the gap on the northern side to the gully and the run-outs are pretty reasonable. In summer when it is snow-free Freedom Peak is just a Class 2 scramble from the north. From the south the route up can be up to Class 4 depending on where you enter the ridge. The summit itself has fine views of the Teanaway Region including Navaho Peak, Earl Peak and the Brothers. The summit on clear day can see Mount Stuart and Mount Rainier. 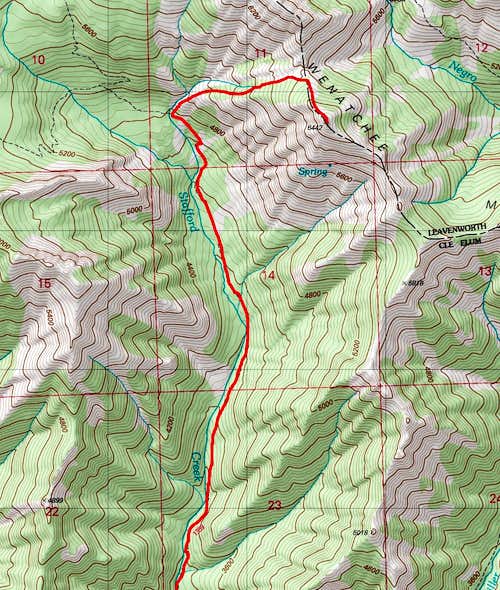 Map of the Route up Freedom Peak
If you are interested in just Freedom Peak then you want to take the Stafford Creek Trail roughly 3 miles north. It will mostly be a gently grade uphill as it runs parallel on the east side to Stafford Creek. At three miles you see a large pointy peak off to the right hand side. It should be noted that there was an avalanche in 2014 that wiped out part of the trail part of the way up. Provided it is not snow-covered you should see always see Stafford Creek on your left. When the trail crosses the creek you should then leave the trail and head up from valley. The waterfall from the now smaller Stafford Creek should now still be on your left (Class 2). Once in the gap head right (south) up to the summit of Little Navaho (Class 2). Freedom Peak is 9 miles; 3400 feet. 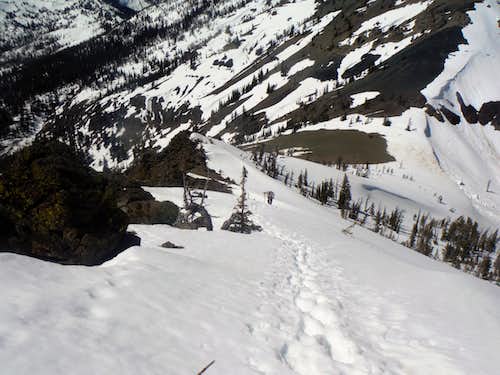 Heading down the north ridge

It should be noted though that many people tend to link it with Navaho Peak. For and info to Navaho Peak click here . Once on Navaho Peak follow the trip down to the gap. You will have to descend a scree field 300 feet to the gap (Class 2). From there proceed from the gap the same way to the summit. Both Navaho Peak and Freedom Peak 13.25 miles; 4400 feet elevation gain 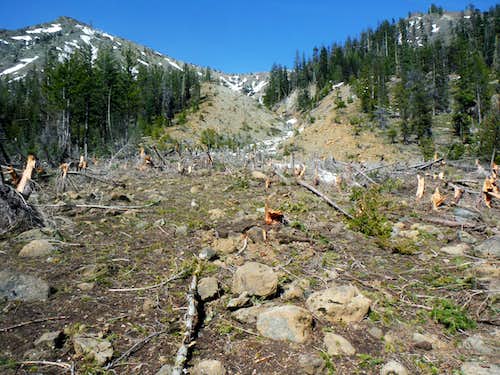 The avalache debris from the avalanche in 2014

VIA STAFFORD CREEK TRAILHEAD: From Highway 970 5 miles east of Cle Elum, take the Teanaway River Road north about 13 miles to 29 Pines Campground. Merge right onto forest road 9737 and stay on the road for about 1.25 miles. Make a right on road 9703. Take 9703 2.5 miles, where the Stafford Creek Trail will be on your left and the trailhead parking will be on the right 100 yards to to the east.

Northwest Forest Pass is required which can be purchased at a ranger station as well as at any northwest REI.

Camping is located on road 9703. From what I saw the gap between Navaho and Little Navaho looked also like a good place to bivy or camp.