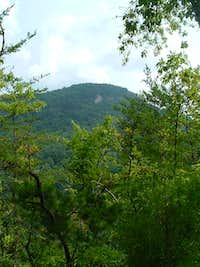 View of The Pinnacle

Although not particularly tall even by the standards of the Cumberland Mountains or offering much in the way of scenic views, Tri-State Peak is rich in geographical and historical significance. As its name suggests, the borders of Kentucky, Tennessee, and Virginia meet at the summit. Tri-State Peak is the first peak at the southern end of the Cumberland Gap, which was the route that Daniel Boone and many of the early settlers took through the mountains into Kentucky in the late 18th and early 19th Centuries. It was also the site of two Union forts during the Civil War.

As you start on the Tennessee Road Trail, you cross into Virginia. Near the trailhead, you will see the remnant of an old iron furnace that was built in 1819. After 0.3 miles, turn left onto the Wilderness Road Trail. This is the trail that Daniel Boone and about 300,000 settlers took through Cumberland Gap into Kentucky. For hundreds of years before them, this route was part of a network of trails used by Native Americans. The Wilderness Road Trail was called “Mishimayagat" or "Great Trail" by northeastern Algonquin tribes and "Athawominee" or "Path where they go armed" by the Delaware and the Shawnee. Follow this trail for 0.3 miles to the saddle of Cumberland Gap.

Make a left onto the Tri-State Trail. Here you will see a monument to Daniel Boone that was set up by four states. The Tri-State Trail crosses back into Kentucky at this point. Follow the trail until reaching a sign that describes a nearby crater that was created during the Civil War. In 1862, a Confederate army invaded Kentucky and forced the Union to retreat. Union forces destroyed their ammunition; the resulting explosion was large enough to make the crater and to force the Confederates to delay their advance by 18 hours.

Ultimately, the Confederates turned back after the battle of Perryville in central Kentucky, and Union control of the state was never seriously contested again. There is also a side trail that leads to the site of a former Union fort during the war (unfortunately, not much remains) and limited views of the Pinnacle, which is on the north side of Cumberland Gap.

After following the Tri-State Peak trail for 0.6 miles, you will see a small structure at the summit. Here is where Kentucky, Tennessee, and Virginia meet. The Cumberland Mountain Trail starts at this point. About 0.2 miles down the trail is the site of another Civil War fort.

The rangers discourage bushwhacking, which is not necessary to summit Tri-State Peak anyway. That’s about it.

Tri-State Peak can be climbed all year round. The heat, haze, and humidity are at their worst in July and August; the best time for a summer hike is early in the morning. 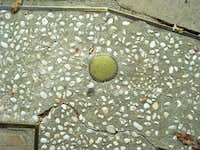 Camping is permitted only at designated sites in Cumberland Gap National Historical National Park, none of which are on Tri-State Peak. Park regulations also make a distinction between “front-country” and “back-country” camping; the latter requires a free permit. The nearest campground is Wilderness Road, which is a front-country site about one mile down US 58 from the intersection with US 25E.