Mount Zeus has the proud status of being the highest peak in the Greek Cyclades. Located in the Tragea region on the island on Naxos, Mount Zeus has important historical significance. In ancient times, the local Greeks believed that the cave on the northwest flanks of the mountain was the birthplace of the god Zeus. Zeus, the god of the sky, became the king of the 11 other gods known as The Olympians. This is how Mount Zeus and the Cave Of Zeus were named. 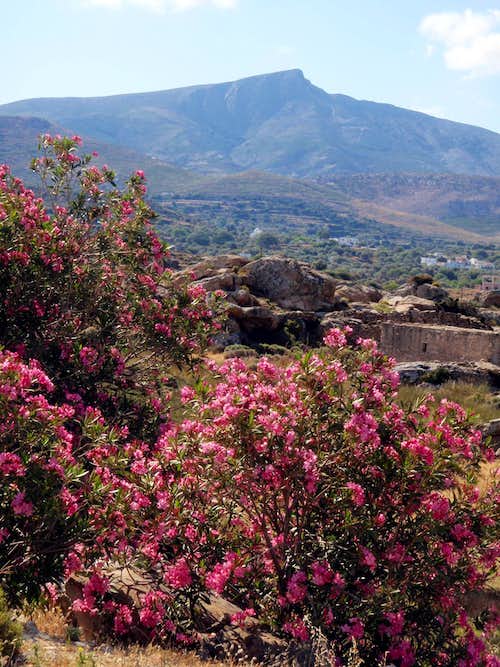 Filoti, a small mountain village of about 2000 is located at the very base of the mountain. There are several nice outdoor restaurants here where one can catch a bite to eat after the trek. North of Filoti stands Mount Fanari 883 meters (2897 feet), and Mount Koronos meters (3271 feet), which are Naxos only other substantial peaks. All three are comprised mainly of sandstone which is conducive to the formation of caves.

There are two popular routes to the summit and a third which is not often used. The easiest is the Aghia Marina route, nicknamed after the little chapel near where it starts. This well-maintained trail is posted with a number of signs and cairns and is easy to follow to the summit. The second route is called Aria Spring / Cave Of Zeus. This route is more interesting than Aghia Marina but is also steeper and more of a challenge. A few spots might require the use of hands. The third route follows the entire south ridge and will not be described here but you can take a look at it on the map. For those using a GPS, these coordinates might be useful. 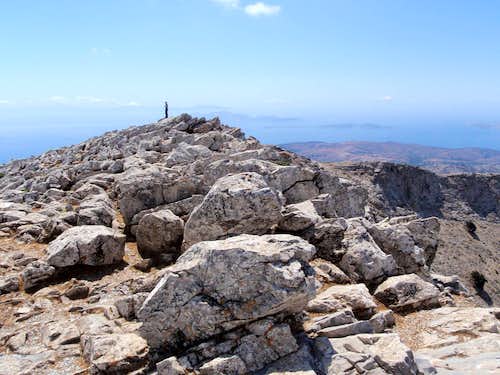 This route is 8 kilometers round-trip. Beginning from the chapel, in the first kilometer, pass through three unlocked gates and pass by one small house. Not far beyond the last gate the trail passes by a watering place where you can find a famous ancient inscription written in old Greek which translates to "Mount Zeus, Protector of the Herds".

Beyond the watering place the trail curves toward the west, eventually running along a few piled rock walls. There are also remains of a few chalk ovens which are sunk into the ground. From here you can see the landscape below crisscrossed with old rock walls which served as property lines in ancient times.

Higher up, after passing a junction (turn right, uphill), the trail curves back toward the southeast as it gains the crest of the north ridge. From here it is a long gradual incline to the summit. For the last several hundred meters, the trail gives way to jagged protruding limestone. Exercise caution here. The high point is marked with a marker and summit register attached to a short pillar. 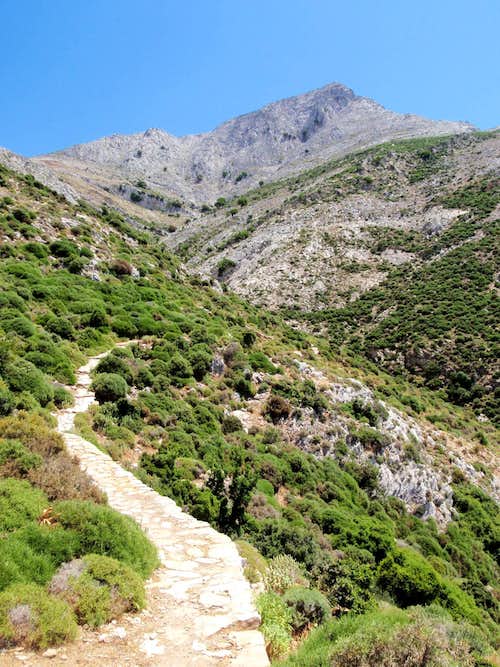 This route is 6 kilometers round-trip. The first part of the trail is easy to follow. The middle portion of the route, beyond the cave, can be difficult to see but is not hard to follow if you have been directed where to go. Beginning at the parking lot, follow the trail past Arai Spring to the Cave Of Zeus. 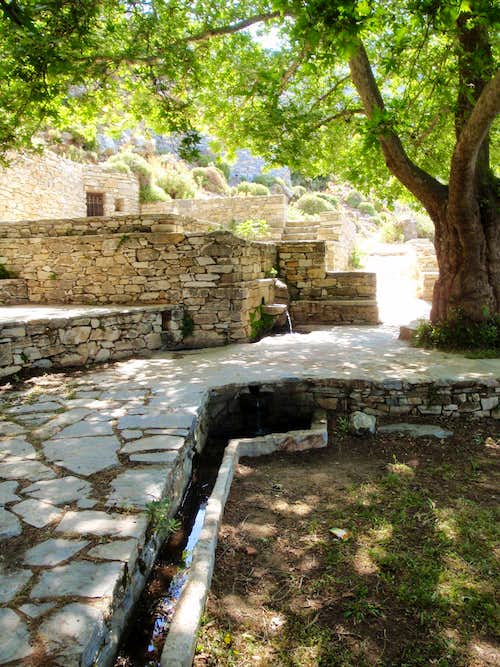 Just above the cave the trail becomes faint and undeveloped as it enters a steep gully. Lizards and thistle bushes are numerous here. Follow this gully up in east by southeast direction until you come to the base of a talus and scree slope. Be wary of loose rocks under foot in the gully and also in the scree slope which is exceptionally loose. At this point the summit cliffs of Zeus are towering overhead. The sight is impressive.

Ascend the scree slope to near the top where the way appears to be blocked by a headwall. Cut to the left on one of two down-sloping shelves. These ramp-like shelves lead up out of the gully and onto the upper slopes. Don't bother searching for a footpath or cairns here because nothing much has been developed. Be cautious of loose dirt and stones and thistles. 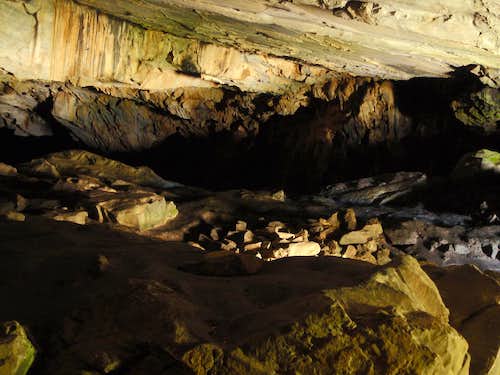 Inside The Cave Of Zeus

The ramp widens out at the upper (northern) end, joining with the broader slope. Here a faint trail and some minor cairns might be spotted. In any case, continue to ascend eastward until joining the well-defined Aghia Marina trail at the ridge crest and follow it south along the north ridge to the summit.

From Naxos Town (Hora) drive 10 kilometers southeast through the vilages of Potamia and Chalkion to the village of Filoti. For the Aria Spring / Cave Of Zeus route drive 800 meters south of Filoti to a junction which is marked with a sign "Aria Spring and Cave of Zas". Turn right and continue 1.2 kilometers to the end of the road.