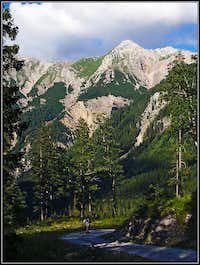 Behind the Central Karwendel Chain (looking from Innsbruck, of course) there are some of the most beautiful valleys of Karwendel. Who doesn't know the famous valley-ends of Grosser and Kleiner Ahornboden? The valleys, branching from the Riss creek valley towards the south are however mercilessly stopped by huge limestone walls of the Central Chain, so for non-climbers there seem to be only a few summit goals. Steinfalk is one of them, and a very prestigeous one. The view from its summit on the walls of Central Karwendel Chain is worth every effort to come there.

The Falken Group is a small branch of Karwendel mountains which is attached to the Central Karwendel Chain on Spielissjoch, 1773 m. So, it branches just from the famous Laliderspitze and goes north until it lowers in the valley of Rissbach. You will find a number of "hawks" (Falk = Hawk) there. The first grassy summit above Spielissjoch is Ladizkoepfl, 1920 m, named by the alpine meadow NW of it. The next one is still rounded and mostly grassy - Mahnkopf, 2094 m. It's only a short walk-up on it's summit from the popular Falkenhuette, and because it offers almost the same nice view as Steinfalk, it is often visited. Hundreds of bikers who make their way to Falkenhuette must at the end have their summit goal, as usually they don't come equipped enough to climb also the rocky Steinfalk. North of Mahnkopf the wild rocky world of Falken Group really starts. The first summit is our Steinfalk, then the rocky ridge goes northwards and soon branches. In the western branch Risser Falk, 2413 m, is rising, in the eastern branch there is Lalider Falk, 2427 m, the highest summit in this subgroup. North of Risser Falk there is Kleiner Falk, 2190 m. North of Lalider Falk there are Turmfalk, 2200 m, and Totenfalk, 2131 m. Between the western and the eastern branch there is Falkenkar, a narrow, pathless valley. Except Steinfalk, all these summits are hard to ascend, they all require climbing at least of degree UIAA II and also good orientation skills.

Being a ridge mountain, Steinfalk shows quite two different faces on the west and east. The western side is wild, rugged, mostly characterized by a ravine, called Arzklamm. The eastern side is also very steep and high, but falling down to Lalidertal (valley) in a sequence of steep grassy slopes. While ascending on top, we saw big number of wild goats moving over there. As said, towards the N from Steinfalk a connection ridge to the two higher "brothers" goes. From Lalidertal another steep valley is ascending towards this ridge. It is called Blausteigkar. There's no information about possible passages through it. Similarly, from the western side towards the connection ridge Talelekirchkar ascends.

Almost the only reasonable approach on Steinfalk comes from the south, from Falkenstand, which is the name for a broad, grassy saddle between Mahnkopf an Steinfalk. But it also requires an absolute safe step (very exposed crossing) and some short easy climbing details of UIAA I difficulty. Reaching the summit from the north, through Falkenkar, is also possible, but those who struggle there through, would probably take one of the two cardinal summits.

And some more parts of the 360 degree view:

From Hinterriss you walk (or bike) towards the south either through Johannestal (the valley west of Falken Group) or through Lalidertal (the valley east of Falken Group). In each case your first goal will probably be the famous Falkenhuette, 1848 m, just north of Spielissjoch. From there the real summit ascent starts. If coming through Johannestal, you can go on top also directly from Ladizalm, 1573 m. The third option to reach Falkenhuette is of course also from Eng (Engtal is further to the east), 1203 m. Toll road from Hinterriss, if you use a public transport, the route on Steinfalk can not be done in one day. 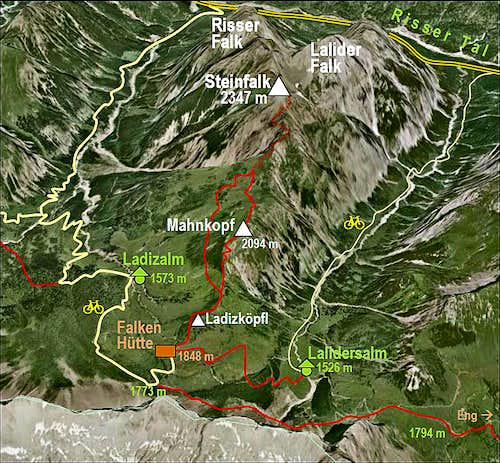 As said in the Overview, there is the major ascent option and the unusual one:

1. From Falkenhuette, 1848 m. It's a short description, but to have order, please see it on a special page. You detour Ladizkoepfl, go on top (or detour it too) of Mahnkopf, reach the broad Falkenstand saddle, then go by the ridge, cross into the western face, climb up the southern ridge again and make it on top. 2 h 30 min from Falkenhuette.

Falkenhuette, 1848 m, opened from start of June till mid October.

Steinfalk is within Karwendel Natural Parc, so camping is forbidden.

Ascend Steinfalk in dry season, so in summer and autumn, approximately in the months when also the Falkenhuette is opened. If wet, or covered with snow, the traverse into the west face of Steinfalk can be very dangerous.