Camiaca Peak is a mountain composed of metamorphic rock on the Sierra crest between Excelsior Mountain and Twin Peaks along the northeast border of Yosemite National Park. It sits at the head of Virginia Canyon with unobstructed views southwest deep into the Yosemite high country. This somewhat isolated lump of rubble can be seen as far away as Clouds Rest and other high points around Yosemite Valley. The south slope makes for a moderate day hike out of Virginia Lakes and the north slope the same from the Green Creek trailhead via Virginia Pass to the north.

It is approached from either Virginia Lakes from the southeast or Green Creek from the northeast.  Virginia Lakes is the more straight-forward and easiest to access approach.  There isn't any major scrambling required to reach the summit.  The best time to hike here is July-September. 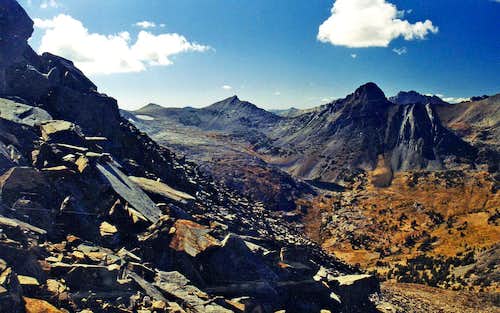 From Virginia Lakes: From the junction with Hwy. 120 take Hwy. 395 north 12 miles to Conway Summit. From Bridgeport take Hwy. 395 south 13 miles to Conway Summit. Turn west at Conway Summit and go 6 miles on the road to Virginia Lakes to the roads end. Take the Summit Lake Trail from the end of the road (9,880'). This trails gradually gains elevation passing by the lakes up to a pass at 11,100' and drops down to the right where it meets the Green Lake trail at 4 miles (10,080'). Take the Green Lake Trail left around the north side of Summit Lake and scramble the class 2 south slope of Camiaca Peak.  Another option is to just head up to Epidote Peak first and then head west to Camiaca Peak.  Then descend back to the Summit Lake trail.

From Green Creek: From the junction with Hwy. 120 take Hwy. 395 north 21 miles to the Green Creek Road on the left. From Bridgeport take Hwy. 395 south 5.5 miles and turn right. Take the improved dirt Green Creek Road (usually passable to all cars) 3.4 miles to a junction and take a sharp right. Continue another 6 miles to roads end (8,040'). Take the Green Lake Trail 1.8 miles to Green Lake. From there go around the north side of the lake on a good use trail that continues on climbing approximately 2.5 miles up Grimes Canyon to Virginia Pass at 10,480'. From the pass go south on the class 2 north slope of Camiaca Peak 0.75 miles to the summit.

No permits are required for day hiking this peak from either Virginia Lakes or from Green Creek. These approaches pass through the Hoover Wilderness. For Hoover Wilderness camping info contact the Bridgeport Ranger Station at 760-932-7070 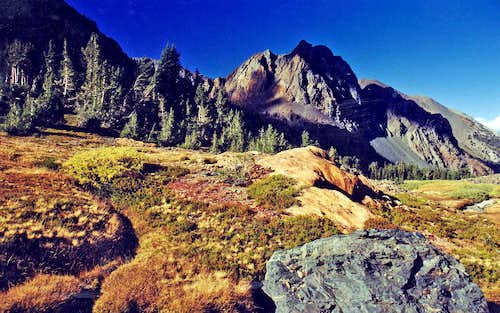 Virginia Lakes: At Trumbull Lake less than a mile from the trailhead. 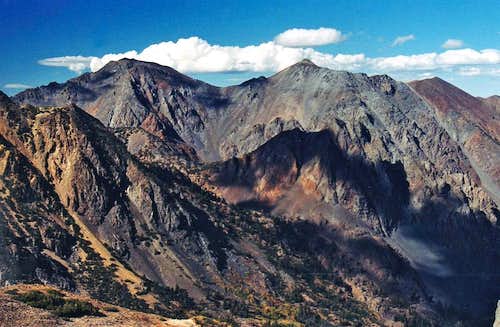 For the current weather and 5 day forecast for the Virginia Lakes area click here.

Camiaca Peak (11,739) Matterhorn Peak 15'. Basalt 7 1/2' In the Yosemite Research Library files a copy of a hand written note from Doug Hubbard about an indian who gave him a piece of root to chew; it tasted like ginseng. The indian said that when he was young he gathered large quantities of the root and took them to the Sioux country to trade for buffalo robes. " He told me his name was Cloudy Camiaca...Later...I applied it to a rather fine peak. I thought I was playing quite a joke on Californians and at the same time giving Camaica a final trip." Unfortunately this information is not correct. When this part of the park's rearranged boundary was surveyed by A. F. Dunnington in 1906, the peak was already named. (Survey notes YNP.) Hubbard was the park naturalist some 50 years later. The peaks name appeared on the first Bridgeport 30 minute map. 1911. (YNP. TNF) Place Names of the Sierra Nevada, by Peter Browning