Nevado Ausangate is a monstrous, dark mountain in the Cordillera Vilcanota south/southeast of Cusco, Peru. It stands as the tallest peak in the Cusco and Lake Titicaca region of Peru and is the second highest peak in southern Peru (Nevado Coropuna near Arequipa is the tallest). The dark massif of rock and ice is the western-most 6000-meter peak in the Cordillera Vilcanota, rising over 2000 meters above the town of Pacchanta. Its primary ridge runs east to west for over 3 miles with towering cliffs along its northern edge. This ridge reachs its climax on the east end as El Cumbre de Ausangate. 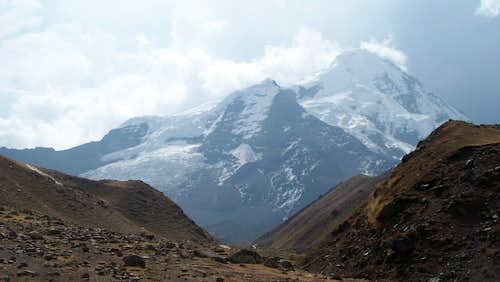 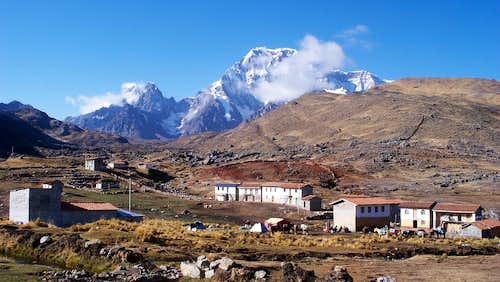 A series of steps must be followed to get to this mountain as with most in the Cordillera Vilcanota. The regular route can be accessed via Tinqui or Chilca. Information on the costs and steps from Chilca are sparse at this time.

Once in Cusco, a bus from the main station can be taken to Tinqui, which lies in the valley to the north of the mountain. Apparently, these buses are fairly frequent and take about 3 hours to arrive in Tinqui. A ride cost less than 15 soles (August 2010).

From Tinqui, a 20-minute taxi ride can take you to the small village of Pacchanta for less than 10 soles (August 2010). However, most porters live and operate out of Tinqui so arrangements should be made prior so that the porters can meet you in Pacchanta.

Pacchanta serves as the base for the Ausangate treks and the start of the march to base camp on the south side of Nevado Ausangate.

Pacchanta has rooms/dorms for cheap with wonderful families running the show and willing to cook meals for you upon request and for only 8 soles. There are campsites before the pass at 4800 meters and at the refuge at 4700 or so meters. Water is a bit of a walk at the site before the pass while right in camp near the refuge. The first camp has room for 5 tents and base camp has room for 12+. High camp requires snow-melting, is rocky, and has room for 1-2 tents. 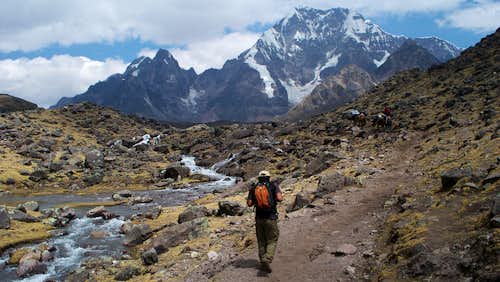 Pacchanta offers several hot springs in which you can soak your worn out bodies after the climb. One pool is warm while the other can be nearly intolerable with heat. The cost to bathe was 3 soles in August 2010.

The local council has decided that a tax has to be paid by tourists crossing the bridge from Tinqui towards Ausangate. By the end of May 2011, the amount was 15 Soles (just over 5 USD). Of course, this tax is aimed at the many trekkers on the Ausangate circuit, but it´s unavoidable for climbers too.

Thanks for the update :-)