Pico da Neblina (Fog Peak) is the highest mountain in Brazil, 2,994 metres above sea level, in the Imeri mountain range (Serra do Imeri), a section of the Guiana Highlands on the Brazil-Venezuela border. As determined by a border survey expedition in 1962, its summit lies barely within Brazilian territory, at a horizontal distance of a mere 687 m from the Venezuelan border at Pico 31 de Março. The latter peak is only 21 metres lower and Brazil's second highest mountain.

The word neblina means "fog" in Portuguese; so, the peak's name (meaning "Peak of the Mists") reflects that it is shrouded in dense clouds most of the time. It was first ascended in 1965 by members of a Brazilian Army expedition.

Officially, Pico da Neblina is located in the municipality of Santa Isabel do Rio Negro, state of Amazonas. However, this is of next to no practical significance, since the mountain is inaccessible from the urban seat of the municipality, about 180 km (112 mi) away, and federal authority over the national park, the Yanomami reservation and the border security area supersedes municipal authority in all practical respects. The nearest city is actually São Gabriel da Cachoeira, about 140 km (87 miles) in a straight line, from where virtually all climbing expeditions depart.

For 39 years, based on an uncontested measurement performed in 1965 by topographer José Ambrósio de Miranda Pombo, using a theodolite, the elevation of Pico da Neblina was thought to be 3,014 metres, but a much more accurate measurement performed in 2004 with state-of-the-art GPS equipment by cartographer Marco Aurélio de Almeida Lima, a member of a Brazilian army expedition, puts it at 2,994 m. This is now recognised by the Brazilian Institute of Geography and Statistics (IBGE), the federal government's official geographic survey and census agency, which jointly organised the expedition. 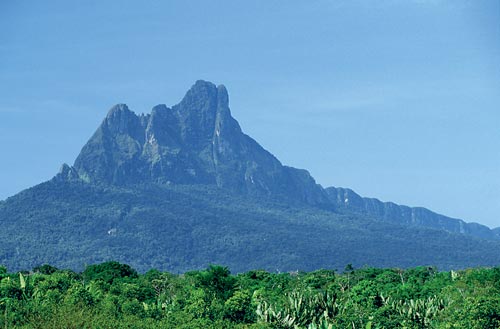 There is little documentation available today on the peak's discovery, and virtually none of it is authoritative, even though Brazilians only discovered the mountain fairly recently, in the mid-20th century. This late discovery can be understood if one remembers how extremely remote, inaccessible and uninhabited that part of the Amazon region is even today, and that it could hardly be expected that such a high mountain (for Brazilian standards) could be found standing next to the vast, low-lying Amazon Basin, even though it was known that there were mountains in that area. Moreover, as its own name states, Pico da Neblina is clouded and hidden from view most of the time.

All this led to it only being discovered in the 1950s. The exact date and circumstances are obscure and not documented, but a popular story often heard in Brazil says that it was supposedly seen and reported by an airline pilot who overflew it at a luckily cloudless moment. However, the massif was known well before that on the Venezuelan side, where it was called Cerro Jimé. In 1954, at about the same time as Brazilians "discovered" it, the area was visited from the north by a Venezuelan expedition led by eminent ornithologist William H. Phelps, Jr., though the peak was not climbed; as a tribute to him, Pico da Neblina is sometimes named Cerro Phelps in Venezuela.

In the 1950s, it was not yet clear whether the summit of Pico da Neblina was in Brazilian or Venezuelan territory, and its precise elevation was not yet known. Therefore, it was still widely held for many years after the peak's discovery that Brazil's highest mountain was Pico da Bandeira (2,892 m or 9,488 ft), between the southeastern states of Minas Gerais and Espírito Santo, in a much more populated, developed and easily accessible region. Only in 1965 it was found and became widely known that Pico da Neblina was the country's highest mountain. Pico da Bandeira remains the highest Brazilian mountain outside of the Amazon region, and the third-highest overall, after Pico da Neblina and 31 de Março.

Due to its location in a national park in a border area that is also part of Yanomami territory, access to the area is restricted and depends on a special permit by the Brazilian Institute of Environment and Renewable Natural Resources (IBAMA). The permit can be obtained at IBAMA's office in São Gabriel da Cachoeira, but all climbers must take an accredited local guide. A four-day trek each way should be expected, three of which consisting of a jungle trek in the rainforest that can be as hard and challenging as the climb itself. Rescue is close to impossible in the area.

Onchocerciasis or "river blindness," a parasitic disease that can cause permanent blindness and is transmitted by a black fly, is endemic in the area, albeit with a low incidence; malaria and yellow fever transmission are also possible. Therefore, climbers are advised not only to take the utmost precaution in avoiding insect bites, but also to discuss preventive and/or therapeutic strategies with qualified physicians who are familiar with tropical diseases.

Robson Czaban, a Brazilian photographer who climbed Pico da Neblina in 1998, reports on his adventure account (in Portuguese) that there are always some gold panners on a small plateau just below the peak, at about 2,000 m (6,100 ft), called Garimpo do Tucano, which serves as the base camp for the last and steepest part of the climb. While the panners' presence there is technically illegal, they are widely tolerated by Brazilian authorities, and Czaban speculates that this would be because in such a remote area, they are believed to watch the border and nature better than IBAMA's rangers and the army would have the means to do. Czaban reports them to be very friendly and helpful.

Several Brazilian agencies can take you up on a tour to climb the peak, and it takes about 1 week to summit and to come back.

The Indian community is really angry at that place, sometimes they kidnap people for money so, be careful if you're planning to climb it. Currently, the national park is closed for visitors and climbers.

Pico da Neblina is a glaciated tor composed of a tilted block of sandstone overlying Precambrian metamorphic rocks. The peak is an impressive sharp rock pyramid or tooth, towering high (when the peak is visible) over the nearby lowlands on the Brazilian side, as the Imeri range quickly rises from only about 100 metres above sea level to about 2,000 metres at the base of the peak in just a few kilometres; from there the peak rises sharply. The Venezuelan side of the massif is hillier and the altitude gradient to the northern plains is less abrupt, although deep chasms and high walls still exist.

Neighbouring Pico 31 de Março can be considered a secondary summit of Pico da Neblina; it has a smoother, rounder shape and is sometimes difficult to be clearly distinguished from Pico da Neblina on photographs, depending on angle and distance. Due to Pico da Neblina's equatorial latitude, while it can be cold on top, sub-freezing temperatures and frost appear to be rare (no permanent measurements are undertaken), and there is no snow.

Anywhere you want, but look for proper campsites nearby Indian villages, too much wildlife there, you don't wanna be someone's dinner!