Mt. Williwaw is the highest of the Chugach Mountains west of Ship Creek. Although it is hidden from many parts of the Anchorage Bowl, a trip to the dramatic summit leaves no doubt that it is the queen of the city’s local covey of peaks. A round-trip from Glen Alps by the recommended route entails about 16 miles of travel and 5800 feet of ascent (the net ascent from the trailhead is only 3200 feet, but ups and downs on the approach and return bring the total much higher). Many make a long day trip of it, but others take more time and camp at the pretty lakes below the peak. There is a still-active glacier in the pocket under Williwaw’s north face, on which one or two crevasses open in late season. It’s the last surviving glacier in the front range above Anchorage. The rock on Mt. Williwaw is relatively solid by Chugach standards, making the class 3 and 4 routes a pleasure. 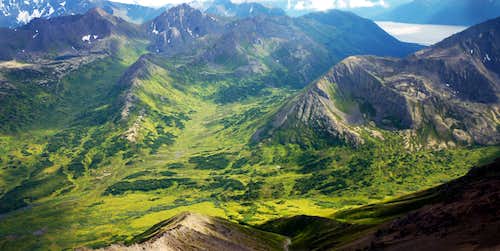 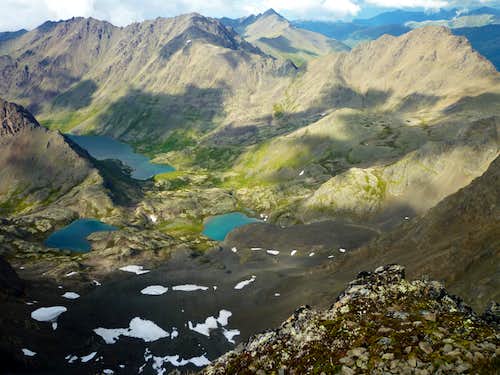 The easiest starting point is the Glen Alps trailhead. From central Anchorage, take the Seward Highway south to O’Malley Road (or take the Minnesota Bypass, which turns east and becomes O’Malley Road). Drive about two miles past the Alaska Zoo and turn right onto Hillside Drive. After exactly one mile, take a left onto Upper Huffman Road. At the top of this, turn right onto Toilsome Hill Drive and continue to the large, paved, well-signed parking lot at the trailhead. The trailhead is at about 2200 feet, close to treeline. Glen Alps suffers from a shortage of parking, and parking on the road outside the gate can net you a $200 fine. An alternative trailhead is Prospect Heights, signposted from the end of Upper O’Malley Road. At both trailheads there is a $5.00 parking fee, unless you have an annual sticker. It’s one of those envelope-in-the-box jobs, so bring exact change. 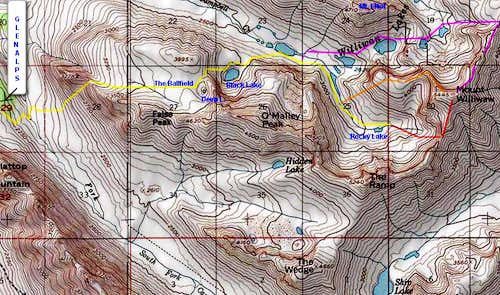 The standard approach (yellow) and principal routes: S Ridge (red); NW Ridge (orange); NE Ridge (purple). Click and click again to enlarge.
Williwaw Lakes: For the South Ridge, Northeast Ridge, and Northwest Ridge routes, you need to reach the largest of the Williwaw Lakes on the Middle Fork of Campbell Creek. The quickest way to do this is as follows: From the Glen Alps parking lot, take the level gravel path at the northeast corner and walk half a mile to the Powerline Road (a dirt access road with no vehicular access for the public). Turn right (east) for about 200 yards, passing one big power pole, and then turn left down a major trail to a bridge over the south fork of Campbell Creek.
From the bridge, your objective is the prominent gully dead ahead, which usually keeps some snow into August. Follow a boardwalk from the bridge to a T junction on the bench above the creek. Turn right and head for the gully. For the gully itself, you can choose either the snow or easy but steep grass along the sides. The gully takes you onto a striking plateau that is variously called “the Ballfield,” “the Football Field,” or “the Baseball Field.” It’s about one mile square, all above treeline and gently sloping. A trail leads east across the Ballfield to its western margin, just south of Point 3995.
From there you drop steeply on scree to Black Lake, nestled under the north face of O’Malley Peak, from which a path leads down to the Williwaw Lakes. At a steady pace, it takes about two hours to reach the lakes from Glen Alps. Alternatively, you can reach the same destination without traversing the Ballfield, using the Middle Fork Loop Trail from either Glen Alps or Prospect Heights to reach the Williwaw Lakes Trail and following it up to the lakes themselves. These options are mapped and described here. An superb alternative map of most of the route is found here. They are pleasant hikes but, due to greater mileage, muddy footing, and an undulating route, they take more time and about the same effort as going “over the top” via the Ballfield. They do benefit from some sheltering terrain, and so will be the better choice on windy days. 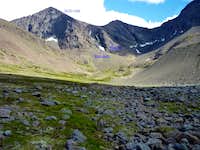 The south ridge variations are marked on this photo; click to enlarge.
South Ridge: Most people climb Mt. Williwaw by hiking into the beautiful cirque immediately north of The Ramp, containing tiny Rocky Lake. To take this route, use one of the approaches above an then follow an indistinct path along the south shore of the largest Williwaw Lake. As you continue along the south bank of the lake's inlet stream, an increasingly good trail will channel you into the cirque.
From there, gain the south ridge of Williwaw near the low point of the Ramp-Williwaw ridge (about half a mile south of Williwaw’s summit), and walk the ridge to the top. The key to this route is getting on the south ridge. Many people do this by going up the prominent snow gully at the center of the photo at left. An ice axe and self-arrest skills are advisable if you're using the gully. My own preference is to climb the rock rib to the right of the gully.
There is a cliff band near the top of the rib which you have to bob and weave your way through, trending to the right; with good routefinding it’s all class 3. Alternatively, a ledge system several hundred yards to the right of the rock rib makes a viable 3rd class line. From Glen Alps, it takes 4 to 8 hours to reach the top this way. If using this route for descent, go down the south ridge to the col between Williwaw and the first pinnacle to the south, then head west down the shallow gully in the scree slope to the west. As this gully steepens, you can exit right into the the class 3 cliff bands mentioned in the ascent description, or you may spot a system of downsloping ledges leading to a 30-degree snow slope far to your left.
Northeast Ridge: The northeast ridge of Mt. Williwaw offers another class 3 route that is a little easier than the climb to the south ridge. From the largest of the Williwaw Lakes, you get on the north side of Middle Fork Campbell Creek and join a boot track past four more Williwaw Lakes. At the last of them, strike out eastward on gentle slopes to get on the Northeast Ridge a full mile north of the peak, in the vicinity of Point 4435. Follow its crest and east side to the top. This route takes about an hour longer from Glen Alps than the South Ridge route, but is at least as scenic, taking you on a tour of the upper Williwaw Lakes, Long Lake, and the impressive glacier in the pocket north of Mt. Williwaw. In reaching the ridge, you will just barely cross a corner of the Fort Richardson reservation; see Red Tape, below. 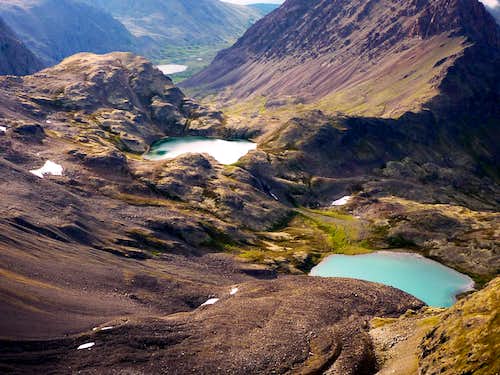 Williwaw Lakes from the NE Ridge
Northwest Ridge: This route is class 4 or, as one accomplished trad climber remarked, "class four-and-a-half." Gain the flat west shoulder of Williwaw on its grassy southwest side, and then walk and scramble the ridgecrest until it turns and becomes the northwest ridge on the summit pyramid. This last thousand-foot section is a spectacular knife-edge. At times you can make your way along the crest, but short detours on ledges and chimneys to the left and right will frequently offer the most viable route. The final thousand feet takes about two hours to negotiate if you are moving unroped, allowing some time for trial and error to discover a safe route around obstacles. Because of the routefinding challenges, the presence of loose rock, and the occasionally massive exposure, this ridge is only for people experienced and comfortable with long 4th class routes. One party (who apparently overlooked a north-side bypass for one of the harder steps) reported the route as being 5.6/5.7.
Ship Lake Pass Route: A class 2 ascent can be done by going over Ship Lake Pass between the Ramp and the Wedge, dropping to Ship Lake, and reascending to the south ridge of Williwaw. This seems inefficient because of the 2000-foot elevation loss on the back side of Ship Lake Pass, but since this route avoids the 1100-foot loss from the Ballfield into the Williwaw Lakes (see Approaches), it’s actually not a great deal more arduous than the South Ridge route.

There are excellent sites around the Williwaw Lakes and in the cirque with Rocky Lake. The latter is the more secluded location; there are not usually any other tents in the cirque. For restrictions, see Red Tape.

Chugach State Park has few restrictions on hiking, camping, and climbing. Campfires are not permitted and very large groups will need a permit. Until recently, the northern slopes were within a restricted military reservation requiring a pass, although the boundaries were not enforced in this area. However, the base boundaries have been adjusted so that this is no longer an issue for hikers in the Williwaw area. Thanks to SP user tovodeverett for pointing out this change.

Source of the Name "Williwaw"

A “williwaw” is a variety of katabatic wind. It is a sudden blast descending from cold coastal mountains to the sea below, creating a violent squall with wind speed over the water that can exceed 100 knots. The term originated as a name for a phenomenon in the Straits of Magellan, but williwaws also occur in Alaska. The term was suggested as a name for this peak by Vin Hoeman of the Mountaineering Club of Alaska in 1963. The name choice related to the death of three Fort Richardson soldiers in this area the year before; they died in high winds similar to a williwaw. 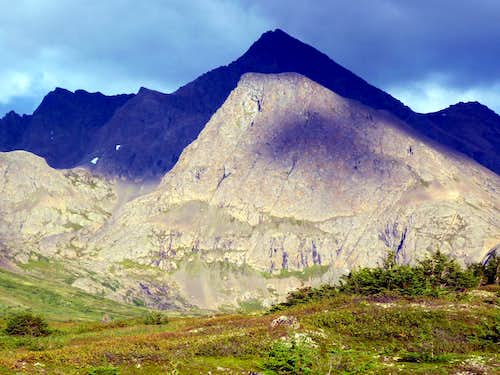 Mt. Williwaw's prominent west butress (sunlit), with the peak itself behind 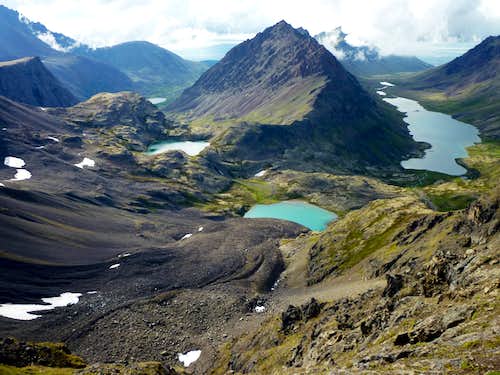 Looking past Mt. Elliot toward Anchorage from the northeast ridge