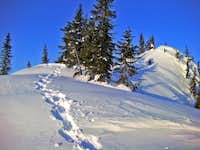 Spinnaker Ridge
Martin Benchmark hands down is a great pick in mountains for the Steven's Pass area with stupendous views on top which offers a 360 view of the surrounding area. The Parking lot starts off in the Chelan County but then crosses back over into King County where Martin and Spinnaker are. This peak is almost always done as a double summit trip. In all honesty Martin is a sub peak of Spinnaker but the maps label it as it's own summit and has much better views than Spinnaker. This peak is not very often climbed which kinda surprises me, I guess those who do end up with bad weather due to winter storms and is not considered worthy enough in later season. The peak has about 2,500 feet of elevation gain, 7.3 miles of distance round trip and only a 147 foot prominence.

Mount Index on the Way 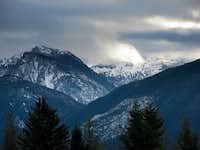 Mount Persis on the way
From Seattle: Head east onto the Highway 520 bridge which goes over Lake Washington. Then take a left (North) onto I-405 until your at Bothell. Then take a right onto Highway 522 which goes to Monroe. In Monroe take a left (East) and follow along highway 2 until you get to Stevens Pass. Once you pass the ski resort on your right continue a little ways down which the parking lot will be on the next right. There is plenty of parking here.

From Leavenworth: Drive east along Highway 2 almost until Steven's Pass. About 2.3 miles from the trail head highway 2 forks back together (west and East bound) which once it forks together the turn will be on your second left.

From the trail head travel onto the other side of the highway which you head West for a few hundred feet. Then take a sharp right which you'll be hiking though what feels like a miniature community of cabins, pretty soon the road then will curve to the left. In total it is about .9 miles of road walking from the trail head to the woods. From here there is no luxurious trail, but as long as your navigation skills through forests and low mountains are ok then things should be easy to find the way. So start out heading West and perhaps a little north going down hill which you will soon encounter a creek. 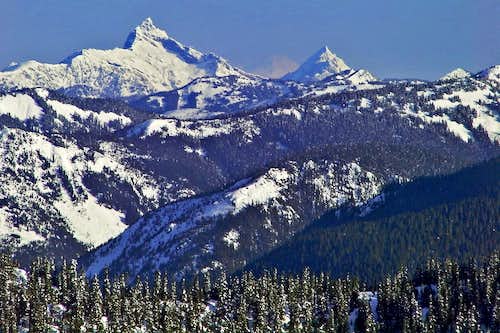 Views of Sloan Peak and Mount Pugh
During the Spring months sometimes the creeks can get a bit deep if you know what I mean, so don't be surprised if you find deep snow cracks or have a hard time crossing the creek. Fortunately both times I went there was a log on one of the creeks which then created a mini snow bridge making crossing much easier. Then on the second one we made a bit of a leap. 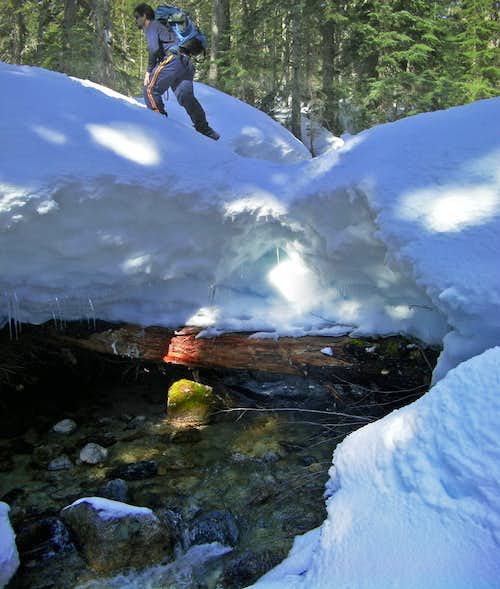 Crossing a Logged Snow Bridge
Depending on how things are, you may find easier crossings a little lower down stream. Keep heading West following on the right of Nason Creek which eventually both you and the creek change direction going South West until you get to a meadow (treeless snow field in winter). Proceed further South west through the woods with slightly ascending to your right (on the lower part of Spinnaker Peak) to assure that you make it to the clearing which you will see a nice cleared out section on the mountain that goes all the way up to a mini pass between Spinnaker and Point 5261. 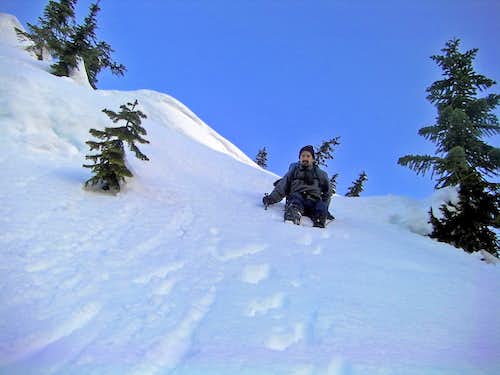 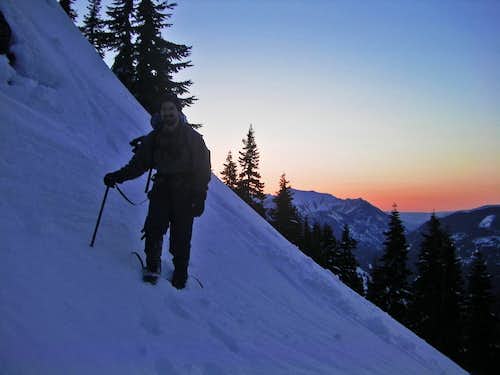 Along the Ridge in the Morning 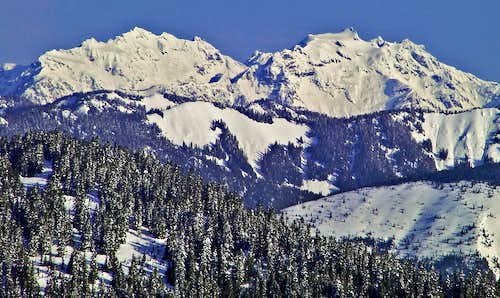 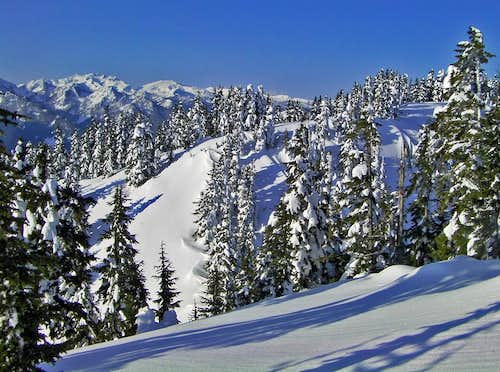 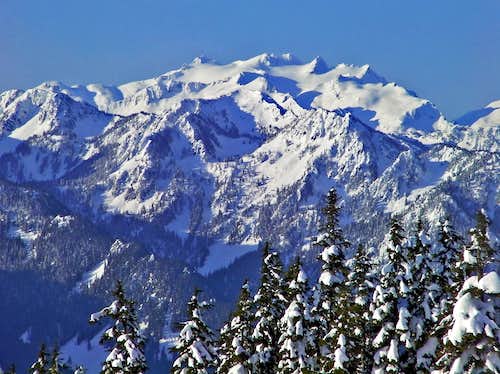 Mount Daniel during April
Alternative Route: There is a small variation for summer time which follows along the Pacific Crest Trail and goes to the basin with no complications which from the trail head after crossing the street rather than taking a right on the road, you would take a left and follow a mini road up to the PCT and then go right. Now I'm not an expert on this because I have not actually done to PCT route, but on a map looks reasonable.

No Permit is required for the trip folks. In winter time Steven's Pass road has been known for getting icy at times which chains for your tires may come in handy depending on how the road conditions are.

The name is some what debatable because of its lack of prominence. Peakbagger calls it Martin Peak while MyTopo calls it just Martin. So because it's a nice addition to Spinnaker and has a Benchmark it's safe for now to call it Martin Benchmark.

Half way up the mountain there are some flat zones which seem like they would be decent places to camp as well as on the ridge. Camping is not allowed before leaving the road section due to rented cabins and such.

10 Essentials
Snowshoes (In Winter or when heavy Snow Covered)
Camera
You may also want to bring a Ice Axe for glissades and if you happen to go up the false summit of Spinnaker Peak as well as a pair of ski polls for Balance.
Crampons/Micro Spikes might be useful if conditions manage to get icy depending on the snow pack, when we went both times they were never needed.

For Weather information check in with the Noaa Forecast. 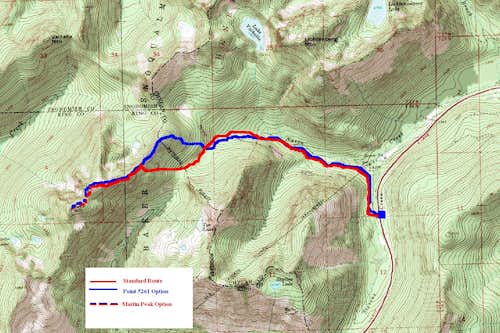 Topographic Map Drawn up by Eastking

The Summit of Spinnaker from Martin