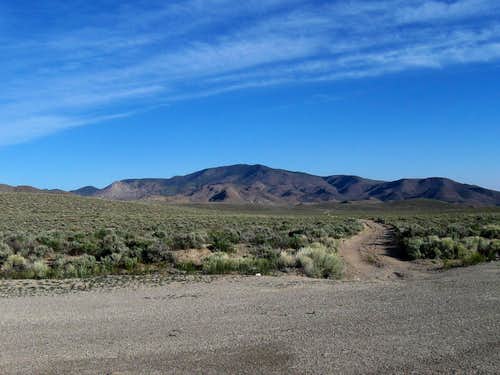 Nevada is full of mountain ranges and peaks that most people will never even be aware of as they travel the few highways that criss cross the state. Only a peakbagger, a prominence or range peakbagger would be interested in this mountain but nevertheless, its presence attracts a few who will seek out the summit of this mountain. Hopefully this page will help those who seek this one out. The summit register held more names than usual but overall, this is still a lonely place in west central Nevada.

With 2099' of prominence, Mount Ferguson comes in at the 149th most prominent peak in the state of Nevada (see this list) Here is a link to the peakbagger page and also a link to the List of John page.

This mountain was named in honor of Henry G. Ferguson who served with the USGS from 1911 to 1959 and who spent a fair amount of time studying the geology of the area that this mountain is found in.

From Tonopah or the Reno area, find your way on US highway 95 to a junction with Nevada highway 361 near the small town of Luning. Turn onto 361 and drive for about 11 miles (not exact) to a turnoff for an unmarked dirt road that I have given a waypoint on the included map. There was a gravel pile near the turnoff which may or may not be there at a later date. Drive to a "T" intersection and take the left fork. Again, see the maps for waypoints and then drive about 1.5 miles and watch for a dirt track heading north. This will turn into a wash that we were able to drive although very rough in places and requiring 4WD & high clearance as we headed towards Cliff Spring where we finally parked and started our hike from. See Maps for clarification.

From where we parked, our route gained about 1400' in two miles. Four miles roundtrip but for some reason it took as long to do the descent as it did the ascent. Weird. See map two in pic section for more info.

"Drove from NV 361 just south of Petrified Summit. There is a wide spot with (at the time of this writing) a large gravel pile at the turnoff. Went NW to T-intersection, turned left and went SW. Northwest of hill 6829 turned right and headed to Petrified Wash. Followed the tracks/jeep trail in the wash (definite clearance, 4WD to get as far as we did) to a little over 7000' near Cliff Spring.

Walked from here (see GPS track) past the spring (dry) and up to the ridge at a spot NE of point 7946. Took the ridge to the top. Came back below (south of) the ridge, but I wouldn't recommend that route."

None that I am aware of. I believe all of the land we traveled on was on BLM land.

You could probably camp just about anywhere but care should be taken to provide a low impact to the terrain utilizing a "leave no trace" ethic and pack out all your garbage. The nearest campground that I am aware of is in the Hawthorne Lake Walker area.

We found a register dating back to 1990, a benchmark and a can part full of ladybugs.

Summit visitors:
The register was placed in 1990 by Gordon MacLeod and Barbara Lilley. In 1998, Richard Carey placed his famous red cans on the summit to protect the register bottle. In 2000, John Vitz and Barbara Sheets signed in. It was 7 more years before Bob Sumner hit the summit and another year in 2008 before Brad Boester signed in. It took three more years before Ken Jones, Dennis Poulin and I  (2011) made the summit and two more years in 2013 before 5 more signed. 2014 was a busy year with 6 more visitors and no one yet in 2015.  Amazing,  eleven after we were there and this page and information on peakbagger were made available.

We had some really nice views particularly to the west and southwest. The views to the east were blocked by some trees but these three pics will give you an idea of why we enjoyed this summit.

This is an isolated area and few people visit it on a normal basis. If you choose to venture out this way, be prepared, have plenty of water and food to sustain you in the event of a vehicle breakdown. Cell coverage is spotty and it is a long walk back to the small town near the turnoff of highway 361 & US 95. Road conditions can change and you may not be able to drive as close as we did unless you have 4WD and high clearance. In other words, you are at your own risk when you do this peak due to its isolation. My route isn't the only way to get to the summit so study maps and decide for yourself on the best way to get to the summit. Others in the register had used different routes. If you should visit this peak, please add updated info to this page so I can make the necessary changes. Thank you.