Mount Fernow is one of the highest and most important peaks located within the Wild Sky Wilderness area of Washington. There are only six peaks over 6000' elevation located within the wilderness area, and Mount Fernow is the only one of those peaks that is not located in the central "Sky Peaks" region of the wilderness area. Despite a summit elevation of only 6190', Mount Fernow and its standard approach have the essence of sub-alpine and alpine areas found on much higher terrain elsewhere in the Cascade Mountains.

With no other peaks of similar or exceeding elevation nearby, great views can be had from the open rocky summit. In fact, Mount Fernow is isolated from higher peaks within at least a seven-mile radius, making the summit a potentially spectacular vantage point. Conversely, Mount Fernow can be seen from many peaks in northeastern King County and southeastern Snohomish County; the way it towers above the surrounding landscape helps make it very noticeable. Mount Fernow is truly one of the "crown jewels" of the Wild Sky Wilderness. 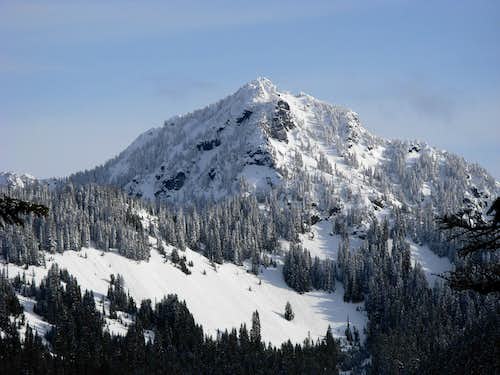 In theory, the mountain can be climbed any time of the year. However, the extent of very steep slopes full of loose dirt and rocks makes ascents unsafe and/or not recommended during wet or snowy weather. In addition, the steep slopes of the mountain and approaches are very prone to avalanches. Snowpack ascents happen occasionally, but are not recommended until avalanche danger has passed (usually mid-June or later, most years). The optimum timeframe for Mount Fernow ascents tends to be mid-Summer through mid-Autumn (i.e. typically mid-July through mid-October), after avalanche danger (and perhaps snow on the approach) has passed but before the Autumn snowpack has started. Many Mount Fernow summiters like making ascents during the timeframe of late August through September, due to the amount of changing colors of flora and huckleberries along the route. 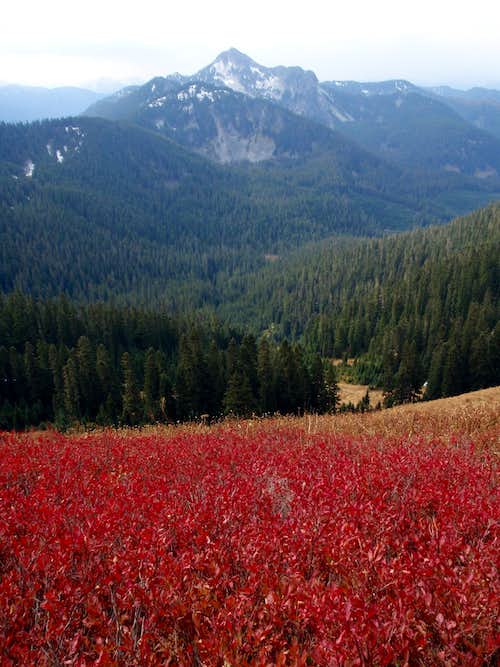 Mount Fernow (during Autumn)
There are actually two peaks named Mount Fernow located in Washington. Both peaks were named by the United States Forest Service (USFS) in honor of the same person, Dr. Bernhard E. Fernow. Dr. Fernow was the chief of the U.S. Division of Forestry from 1886-1898, which was a pivotal exploration period for the central Cascade Mountains in Washington.

Mount Fernow is the centerpiece for several of important lakes within Wild Sky Wilderness. A seven-acre sub-alpine lake located on the south side of the mountain was originally named Mount Fernow Lake, but has since become known as Jakes Lake. At 5069' elevation, Jakes Lake is the highest-elevation lake within Wild Sky Wilderness. In addition to Jakes Lake, several small tarns located in a basin on north side of the mountain comprise an unusual alpine wetland. These tarns are known as the Mount Fernow Potholes, which are considered hidden treasures of Wild Sky Wilderness due to their alpine wetland terrain, remoteness, and lack of regular visits by humans.

1) Drive east along Highway 2.
2) After ~0.6 miles, turn left (north) onto Beckler Road (a.k.a. Forest Road 65).
3) After ~7.0 miles, make a hard-right turn (almost a u-turn) onto Forest Road 6520, which immediately heads uphill.
NOTE: There are two right-turn side roads at this intersection, Forest Road 6530 on the leftside that follows Rapid River, and Forest Road 6520 on the rightside that immediately heads uphill and leads towards Mount Johnson Ridge and Mount Fernow.
4) After 2.7 miles, veer right onto Forest Road 6524. Some maps and signs might show this road as Forest Road 6522.
5) After 1.3 miles, continue following the main road (Forest Road 6522) as it bends left and uphill. Most street-legal vehicles should be able to drive to this point, although high-clearance vehicles are definitely recommended.
NOTE: Forest Road 6524 is an old, single-lane, partially overgrown road that heads straight and southward. That road is not recommended.
6) Continue following Forest Road 6522 up to the ridgetop, until the road-end. This distance is approximately 2.5-3.0 miles, depending how far the road can be traveled.

Although most of the forest roads in these driving directions would be usable by most street-legal vehicles, the USFS has added speed bump mounds at various sections of the road systems for which high-clearance vehicles are definitely recommended if not required. With that said, a smaller vehicle such as a Suburu Outback has been known to drive the entire Forest Road 6522 to its ridgetop road-end (~4800' elevation).
------------

This gate adds approximately one mile of road-walking each way, making the roundtrip hiking distance approximately 7-9 miles. The final 0.5 miles to the road-end of Forest Road 6522 have been heavily bermed and made impassable to vehicles.

Special thanks to SP members "bigjoesmith" and "rross" for providing the updated road/gate information.
------------

The standard route for Mount Fernow begins west of the mountain. There are several other approaches and routes for Mount Fernow, all of which are more labor-intensive and/or have routefinding issues, including from the north (Johnson Ridge), south (Alpine Baldy), and east (Kelley Creek). These other route options are welcome to be submitted as "Route" pages in the future.

There is an old fisherman's path that leads from the road-end of Forest Road 6522 to Jakes Lake, at the southern base of Mount Fernow. However, much of the path has become overgrown through the years. It can be seen at various stages, and in such situations it is highly recommended to follow.

The route map below is a basic guideline. The general route (i.e. fisherman's path) between the road-end and Jakes Lake follows on or near ridgetops.

1) Hike south up a narrow ridgeline until at the western base of Point 5320. 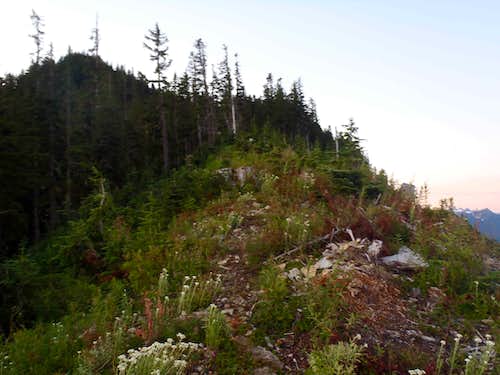 The first ridge to ascend after the road-end of Forest Road 6522
2) Either steeply ascend up and over Point 5320, or side-traverse around the hilltop (angling up towards the ridgetop).
3) From Point 5320, follow the ridgeline southeast towards Point 5403. There is an unnamed/unmarked hill in between Point 5320 and Point 5403, and the southeastern end of the unnamed hill is steep.
4) Once at the western base of Point 5403, follow a very steep path that leads to the top of the hill.
NOTE: Many people consider the traverse over Point 5403 to be the "crux" of the entire hike for Mount Fernow.

Point 5403 and Mount Fernow, as seen from the south
5) From the top of Point 5403, steeply descend its northeastern ridgeline and then continue heading northeast along/near the ridgetop. There is a lot of sidehilling between Point 5403 and Jakes Lake. 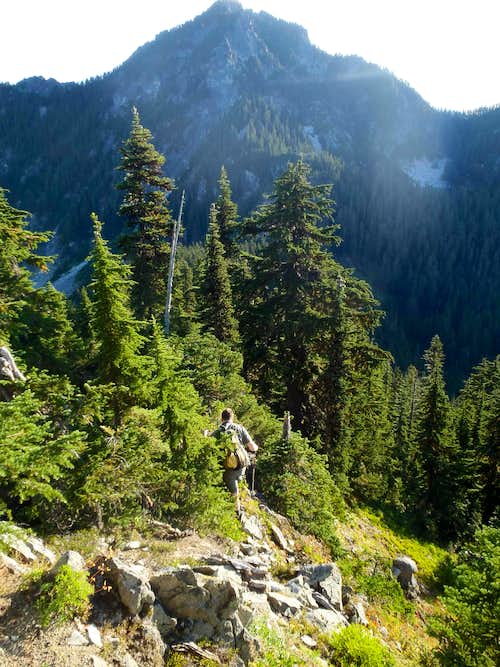 Descending northeast from Point 5403...
6) A steep rocky cliff ridgeline is encountered, approximately 0.25 miles west of Jakes Lake. The route follows near the rightside/southern base of this section. Climbing the leftside (or over) this rocky ridge is not recommended. 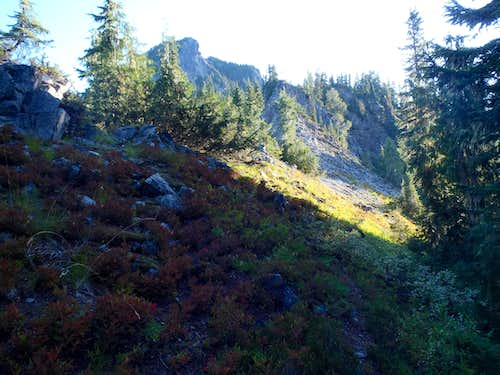 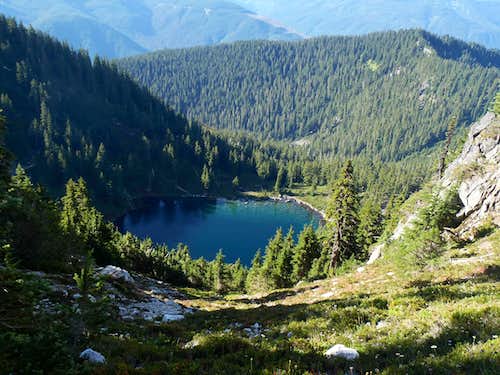 Jakes Lake
8) From Jakes Lake (5069' elevation), head around its left (west) side towards a boulder gully. 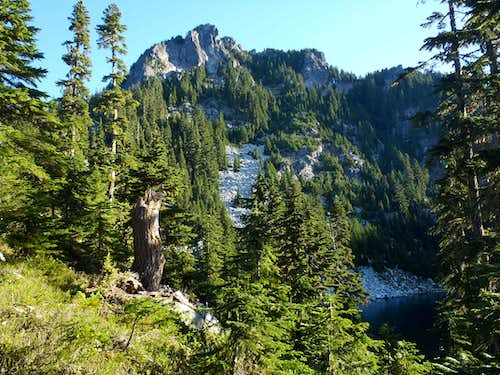 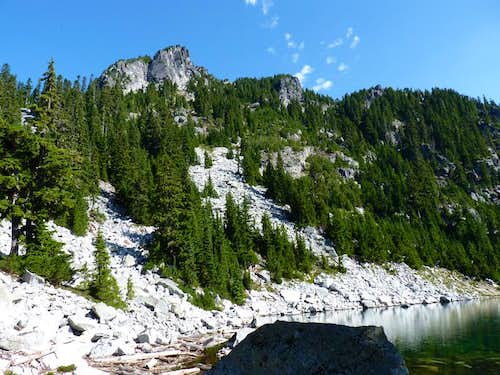 Closer view of mountain and route from Jakes Lake
9) Steeply ascend the boulder gully, which appears to head straight uphill towards a gigantic rocky pinnacle looming above. This rocky pinnacle is not the summit; it is only a minor offshoot ridge-end. 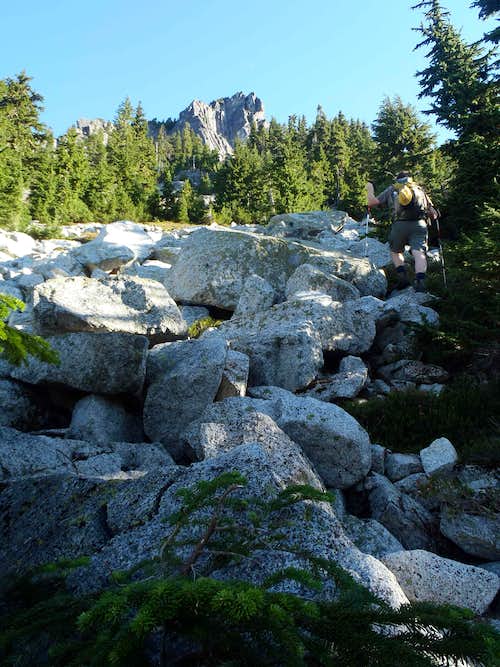 Ascending boulder gully...
10) Above the bouldery section, the gully veers around the rightside of the large rock cliff looming above, and the gully starts to become a steep ascent of heather and huckleberry shrubs at its upper end. 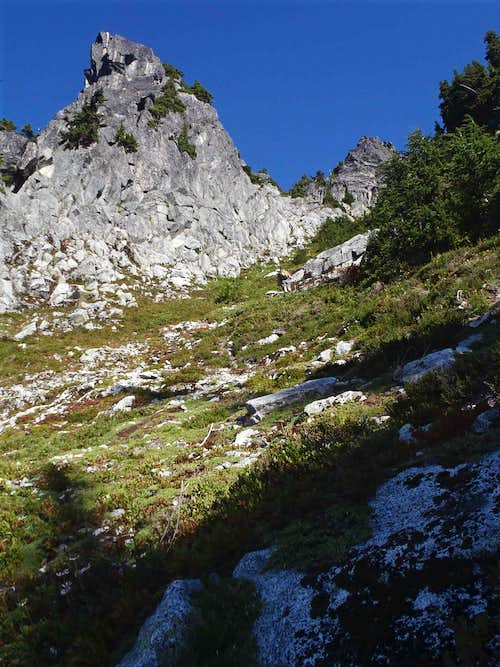 Ascending upper gully...
11) A large boulder is in the middle of the upper gully within 200' elevation of the summit. A short rocky scramble around either side of the large boulder, and then ascend to the summit ridge from there, is recommended. It is also possible to ascend on the rightside of the boulder and gully up a very steep and narrow gully, but that is considered unsafe and not recommended.
12) Once at the summit ridge, turn right (east) and side-traverse to the rocky summit. 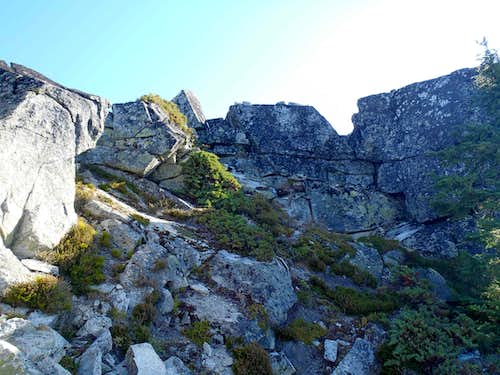 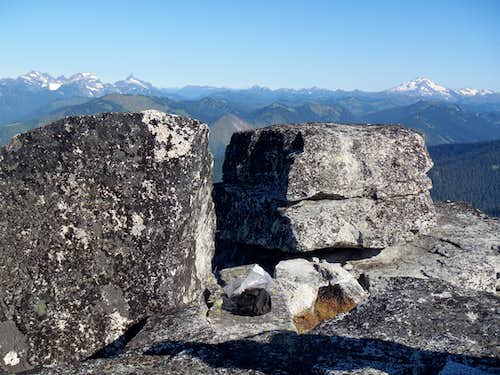 ROUNDTRIP HIKING DISTANCE: Approximately 7-9 miles with 2500' elevation gain (if starting from ridgetop access gate). However, this is misleading because approximately half of the total roundtrip elevation gain is from Jakes Lake to the Mount Fernow summit during the ascent. In addition, that substantial elevation gain from the lake to the summit only takes approximately 1/3 of the total ascent time. This is because there are many ups and downs along the ridge approach that tend to slow down hiking time between the road-end and Jakes Lake, whereas the ascent from the lake to the summit is fairly consistent and straightforward. 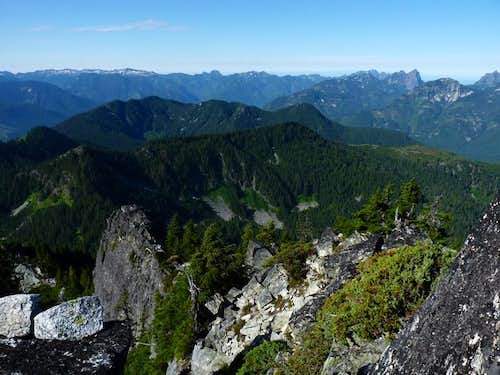 From the summit, a look back at the ridge approach from the road-end

As no official trailhead is being used, no special permits or fees are required for the standard approach of Mount Fernow.

During periods of no snowpack, only hiking poles are required in addition to the "10 Essentials".

During periods of snowpack, other gear such as helmets, crampons (or microspikes), and possibly a rope. 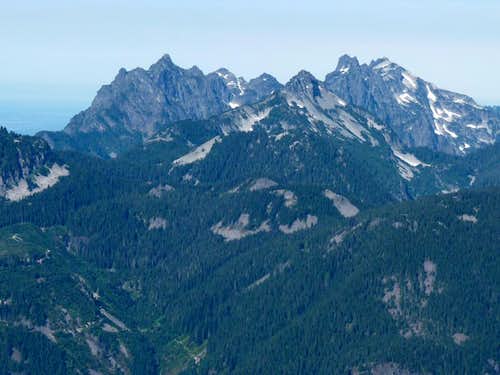 Due to a lot of steep, angled, brushy terrain along the approach, there are usually only two main locations where a tent could be setup. The ideal location for most people would be at the southern end of Jakes Lake (~5100' elevation), which is a seven-acre lake located at the southern base of Mount Fernow. However, there is a small flat heathery section of ridgetop between Point 5403 and Jakes Lake which might be another good location for an actual tent to be setup. 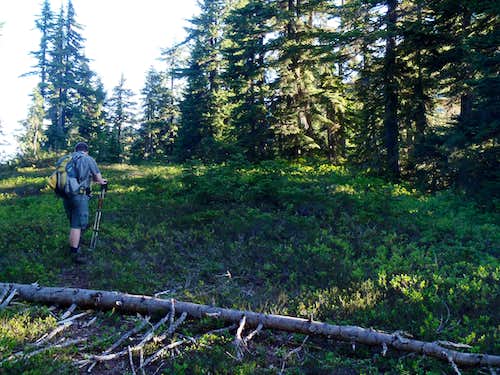 Please check with the Skykomish Ranger Station (which is the closest ranger station to Mount Fernow), to find out current campfire policies.

Eric Noel made a trip report, from his (our) successful summit trip during late September 2011.

Eric Noel made a video from the summit of Mount Fernow, as well.

Bryan Kraai made a video from his snowy summit trip to Mount Fernow during mid-June 2011, which was following a Spring that had near-record snowpack... much of which was still on the route and mountain.

The map referenced on the page seems to be gone? Can you resolve?

Thanks for the heads-up. During the multiple revisions to the website, many of my past photos and maps got deleted or somehow compromised without my knowledge. I will need to try to locate the map.

One of my hiking partners, Eric Noel, has a GPS track log / map shown on Peakbagger: https://www.peakbagger.com/climber/ascent.aspx?aid=198826