The pretty forest on top of the Fifth Sister
When you're somewhere in the middle of a batch of seven sisters, it's easy to get overlooked. And much as the residents of the Black Mountain/Swannanoa Valley love their Seven Sisters Range, you don't hear too much about number five. Brushy Knob and Stomping Knob have their trails that pull in hikers by the dozen; Big Slaty gets traversed by the hordes of pilgrims paying respects to father Graybeard; even lowly Solomon Morris gets attention as the home of Billy Graham. But the fifth sister is so lost in the bunch that even the City of Black Mountain gets her mixed up with somebody else.

Well, the Fifth Sister, unofficially called Forked Ridge Knob, is really a pretty nice mountain. Her rocky, lonely south ridge has a wild drama her siblings lack, and her rock-garden summit gives you unusually pretty forest that parts occasionally for glimpses of the Great Craggy Mountains. If you've got a little extra time, add her to your dance card when you're courting one of her better-known neighbors. The Fifth Sister is located midway along the West Ridge Trail that follows the crest of the Seven Sisters. Whichever direction you come from, you'll be traversing a couple of other sisters.

The basic way up is to come over Brushy Knob (the third sister), for which trail access is amply described here. From the top of Brushy Knob you'll continue north on a good ridgetop trail, traversing the Fourth Sister a few minutes beyond Brushy and continuing half a mile farther to your destination. From the Big Piney Ridge trailhead parking to the top of Fifth Sister involves a 1600-foot climb over the course of a little more than two miles, and will take most people one-and-a-half or two hours.

Alternatively, you can descend to Forked Ridge Knob from the top of Graybeard, taking the West Ridge Trail from the well-marked junction near the summit of Big Slaty. The trail map here tells you all you need to know.

The watershed of the North Fork (Burnett) Reservoir, covering the whole western flank of the Fifth Sister, is Asheville Watershed land off limits to hiking of any kind. Hiking the Seven Sisters crest, along the boundary of this restricted region, is permissible.

The rest of the mountain is privately owned by the Mountain Retreat Association, which operates the Montreat Conference Center. Hikers are welcome, but camping is not permitted. You also can't mountain bike on any of Montreat's trails on the Seven Sisters (although there are other places in Montreat you can do so).

The photo below shows the Seven Sisters Range from the Montreat side, with Forked Ridge Knob in the middle: 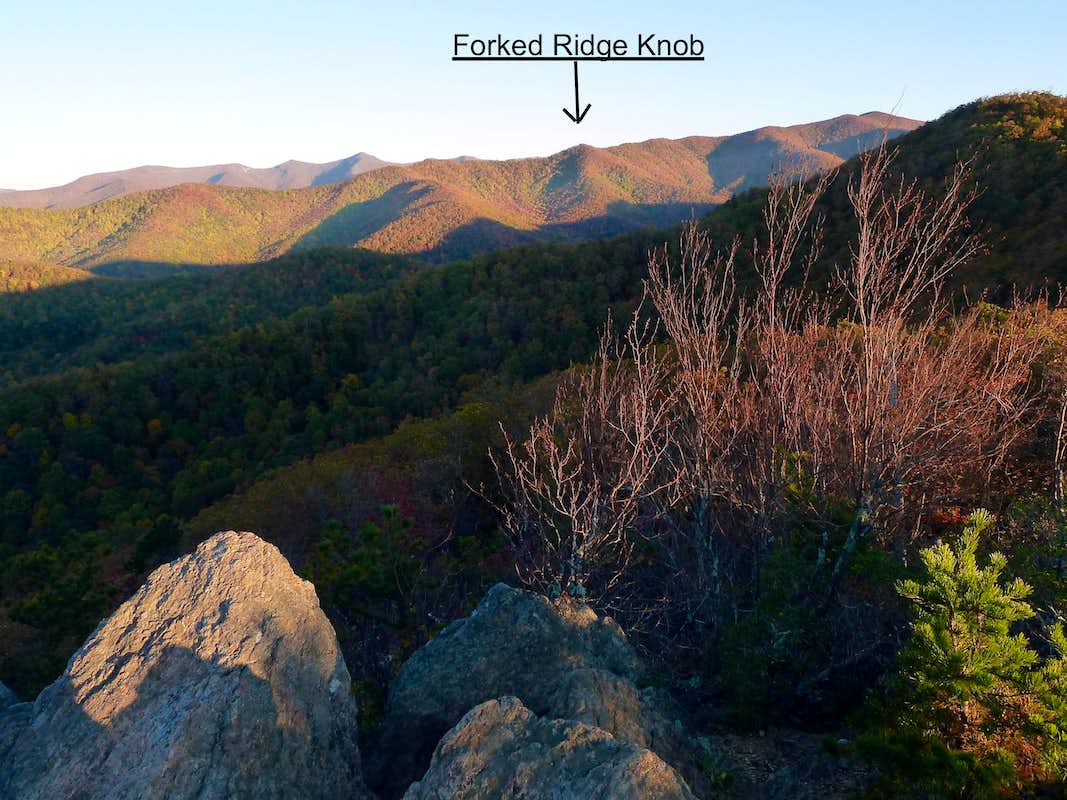