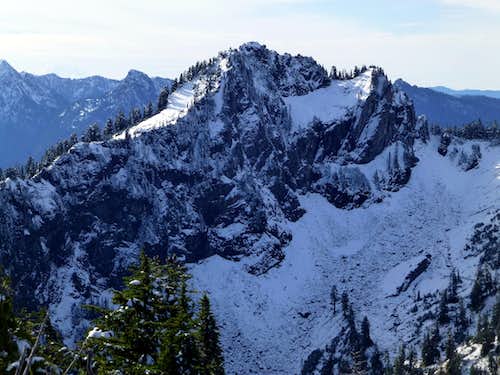 Independence Peak from Bluegrass Butte
Independence Peak is the unofficial name given to a 5445' peak 21 miles E/NE of Granite Falls, WA. Why this peak was never named on USGS maps is uncertain - it stands taller and more prominent than most of its neighbors. As a climb, Independence Peak deserves more attention. The base of the peak is easily approached via a well maintained trail, and the views on top are equal to those of nearby Devils Peak and Helena Peak. The Cascade Alpine Guide describes a couple of different approaches to the peak that sound unnecessarily brushy and difficult. The approach from the Independence Lake/North Lake trails is the route described here.

Drive the Mountain Loop Highway east from Granite Falls for 26 miles to the Coal Lake Road (FR4060). Turn left onto this road, follow it 4.8 miles to the end, and park at the trailhead for Independence Lake (elev 3580'). Hike FS trail #712 0.8 miles to Independence Lake (elev 3720'). From here, take FS trail #712.1 towards North Lake. Hike for 1.5 miles to the ridge crest south of point 5072' - don't be fooled by the minor ridge crest 0.3 miles before this point on the west side of Point 5072'. Now, turn right off the trail, and find the climber's path leading south towards Independence Peak. Your view of the peak should look something like the picture below. 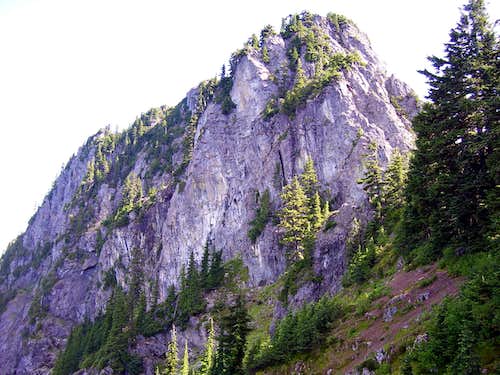 Follow the climber's path 0.2 miles to the west side of Independence Peak's summit block. You should now be at the left edge of the summit block in the photograph below. 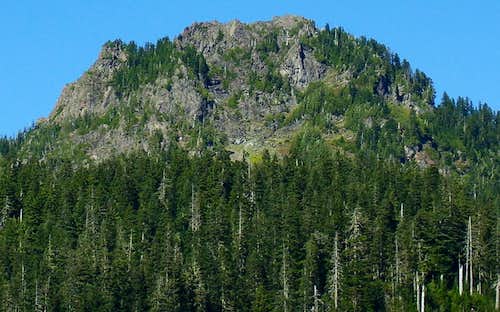 From this point, it is possible to climb directly up the west ridge, and the summit register indicated that several parties had done so. To me, it appears to be at least a class 4 climb. Being by myself, and not having a rope, I decided to find an easier way. Begin a traverse counterclockwise around the summit block on the south side. A number of variations are possible, just use caution for steep, loose scree slopes in a few places. Descending down from the ridge at the beginning of the traverse (as opposed to staying just below the cliffs) might make the traverse easier, but this is not an option I explored. Upon reaching the east end of the south face (right side of the summit block in the photo above), you will notice a slope that leads right, then left, up to the summit. The climbing here is class 3, with plenty of vegetation for "bush belays" and "schrub rappels". 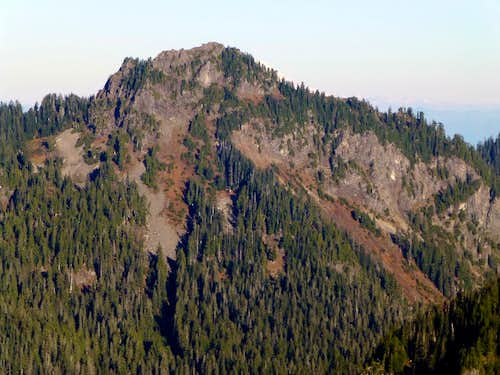 Independence Peak from Beaver Peak. The scramble route starts on the left side of the photo, and traverses around the cliffs to finish on the right (east) side of the summit block.

Independence Peak provides great views of the surrounding peaks, as well as views down to North Lake and Coal Lake.
Note: If you have the time and energy, consider a quick scramble over to Bluegrass Butte (NE side of North Lake) for a easy "2fer". 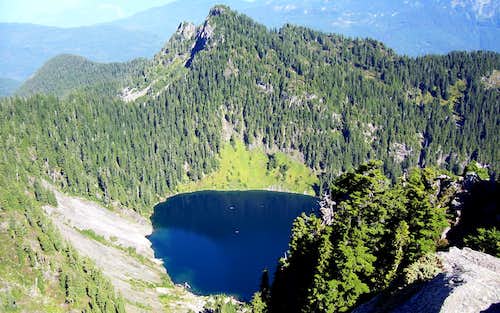 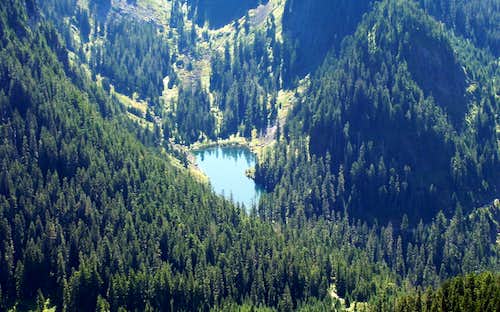 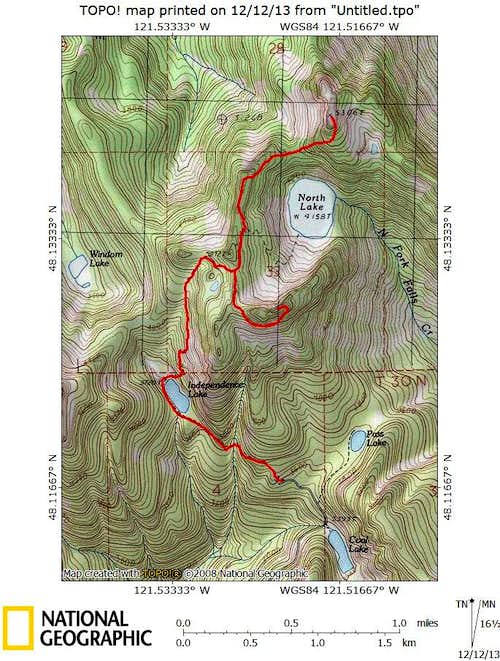 A Northwest Forest Pass is required to park at the Independence Lake trailhead.

Independence Lake would be a good option for camping, or one could continue on to North Lake. Camping at North Lake would add an additional 800' of elevation gain to your trip.