Greens Peak is the highest of a set of rounded knolls sitting atop a raised highland north of Mount Baldy, in the White Mountains of Eastern Arizona. The White Mountains and surrounding terrain are part of the Springerville Volcanic Field, the second-largest such field in the country (the largest also being in Arizona, the San Francisco Volcanic Field in Northern Arizona). Greens Peak is named after Major John Green, who was a principal figure in the creation of Fort Apache (source).

The knolls that sit atop the highlands north of Mount Baldy all have a consistent round shape, usually rising about 500-800 feet above the meadows and forests below. The knolls, including Greens Peak, are apparently single-event eruption cones, or monogenetic cones. The eruptions came and went, never often enough to form into one giant mass with a sophisticated magma system.

As far as climbing goes, a hike to the top of Greens Peak is very easy, and many hikers come to this region to hike many of the surrounding cones such as St. Peters Dome, Poll Knoll, Wahl Knoll and many others. The surrounding countryside is a mix of open meadows and forests of ponderosa. In summer, conditions up here are very mild, but prone to thunderstorms. In winter, this region gets considerable snow (Sunrise Ski Resort is nearby), but the terrain is gentle enough that cross-country ski treks to Greens Peak and various surrounding knolls would be possible.

The town of Greer is located nearby with rustic accommodations including cabins and old-time hotels. The giant Wallow Fire of 2011 burned much of the White Mountains including parts of Greer, but the areas around Greens Peak came out unscathed. 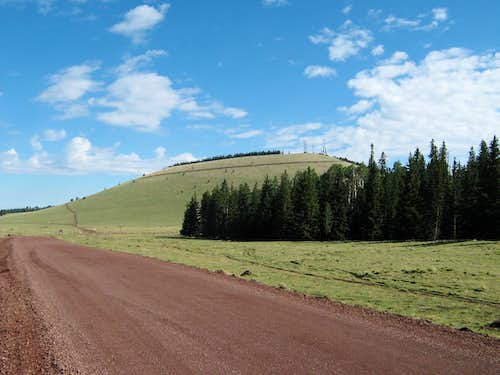 Drive north on FR-117 for four miles, then ease left onto FR-61. Greens Peak stand directly above. Drive to a Y-junction and go right. Park where convenient.

The roads are well-graded hard-pack and suitable for passenger vehicles in dry conditions. In winter, access will be severely restricted due to snow. 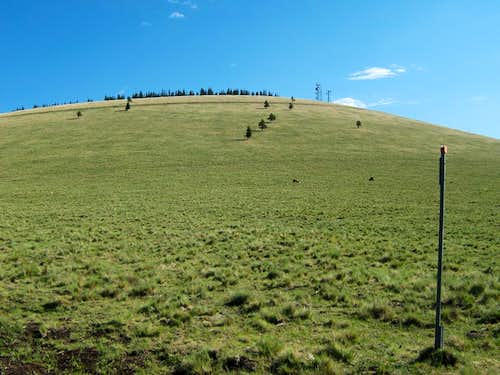 Looking up the slopes.

There are countless wonderful camping areas in and around Greens Peak. Just drive until you find one that catches your interest. The land up here is beautiful meadow with low bunch-grass, interspersed with mature forests.

Formal camping is available in Greer, plus its blend of cabins and lodging, which range from basic (as in "rustic") to pricey. There are no chain operations in Greer. There are also many campsites south on AZ-273 heading toward Mount Baldy.

The city of Springerville, about 20 miles east along AZ-260, has chain hotels, grocery stores, gas stations, restaurants, and so on. To the west, lodging and sundries are available in abundance in the cities of Show Low and Pinetop-Lakeside, roughly 50 miles away. You can also stay at the Hon-Dah Resort and Casino on the White Mountain Apache Nation.

Hike the road to the top, which is about 1.4 miles each way from the Y-split in FR-61. You can cut up the slopes directly, if you desire.

The views up here are wonderful, with perhaps the best view of the sprawling Mount Baldy located south.

Other knolls rise up all around you. Make a day of hiking up each of these, weather permitting. 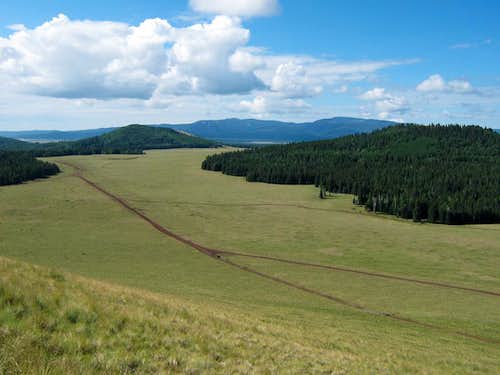 The best view of Mount Baldy is from the top of Greens Peak.