Mt Reinstein is a remote peak in Kings Canyon National Park along the White Divide.  The peak is difficult to distinguish from its unnamed neighbors and is overshadowed by its massive neighbor, Mt Goddard. It may have been singled out for a name as it overlooks the pass (Reinstein Pass) that divides the headwaters of the South Fork of the San Joaquin River (Goddard Canyon) from Goddard Creek, which ultimately flows into the Middle Fork of the Kings River.  The trick to ascending Mt Reinstein is not the actual scrambling route, but in the approach.  Mt Reinstein is one of the 248 peaks listed by the Sierra Peaks Section of the Sierra Club Angeles Chapter.  According to Francis P. Farquhar’s Place Names of the High Sierra (1926), the peak was “named by R. B. Marshall, U.S.G.S., for Jacob Bert Reinstein, a regent of the University of California from 1897 to 1912. (R. B. Marshall.) A.B., University of California, 1873; a charter member of the Sierra Club; died, 1911.”

Mt Reinstein is easiest approached from the west using the Florence Lake, Courtright, or Wishon Reservoir trailheads.  From the Fresno area, head east on Highway 168 towards Shaver Lake.  If choosing either Courtright or Wishon reservoirs as the starting point, take the Dinkey Creek road after entering Shaver Lake.  If using the Florence Lake trailhead, continue on 168 and at the east end of Huntington Lake, turn right onto well designated Kaiser Pass Road following it another 17 miles to an intersection where the road splits to Florence Lake.  Most of the road after the pass is single lane and slow going.  From the east side, any route that connects with the JMT will work but the unmaintained (but excellent) Lamarck Col is the fastest approach to the mouth of Goddard Canyon. 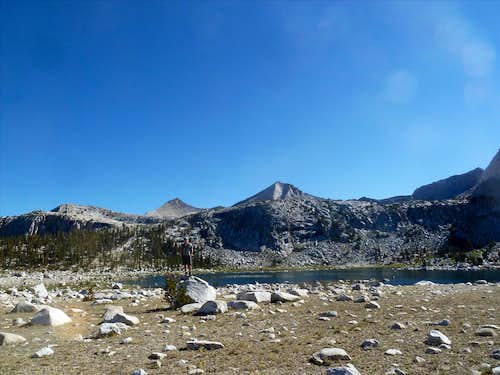 Mt Reinstein is another of those deep Sierra peaks that requires careful planning on the approach if the trip isn’t part of a multi-day itinerary. It’s debatable on what the best approach is but the closest trailhead to an all trail route to the peak is Maxson TH out of Courtright Reservoir on the west side.  For those who have the time, there are a variety of other routes that will work.  Mt Reinstein has been dayhiked and also makes a splendid warm-up peak for those on a multi-day trip to the White Divide.  For the latter plan, a mixed trail/crosscountry route is discussed in the Wishon Reservoir section that by far is the fastest / shortest way into the Portal Lake area.

Courtright Reservoir:  The Maxson Meadows trail head is the only realistic trail to use from Courtright reservoir.  A four-wheel drive vehicle will shave a couple of miles from the start.  Hike approximately 13 miles to Big Maxson Meadows where you have an option to turn northeast and head towards Guest Lake and Blackcap Pass (climb ledges on the north side) or continue along the North Fork Kings River to Portal Lake.  (note that the 15’ minute map shows the old trail to Guest Lake which will save a couple of miles.)  The granite in Blackcap Basin makes traversing the basin easy and there are plenty of options for campsites at lakes.  Portal Lake is also an ideal and sometimes popular camping spot and sets up the remaining approach on easy country.

Wishon Reservoir (all trail):  There are two possible routes to Mt Reinstein from the Wishon Reservoir, both out of the Rancheria trailhead.  The first uses trails to meet up the Guest Lake route or North Fork King River route described in the Courtright Reservoir section. Follow the Rancheria trail first east and then north.  At the Chuck Pass trail junction, you can either head east over Chuck Pass and then turn north over Crown Pass or continue north to the Woodchuck trail heading east on it to Crown Pass.  The trail heading north down from Crown Pass accesses the previously discussed options from Big Maxson Meadows.  The second route follows the High trail to Portal Lake from the outlet of Halfmoon Lake just north of Crown Pass.

Wishon Reservoir (trail & cross-country):  As more than half of this route is off trail, good navigation skills are a must.  Follow the Rancheria trail first east and then north.  About ½ mile north of the junction with Duck Lake (~9000’), look for a use trail (cairns and blazed) that short cuts to the Chuck Pass trail northeast to hit Chuck Pass.  From Chuck Pass, traverse (~9600) and descend cross-county northeast towards Crown Pass.  You should hit the Crown Pass trail just below 9400’ but instead of taking the trail, turn east and hike cross-country up to the saddle (9740’) between Pt 9818 and Pt 10,738.  From the saddle, hike up roughly NE almost 1000’ to just under the 10,600 contour line (do not contour at a lower level as the traverse and climb out is strenuous.) Contour east through the saddle created by Pt 10,776 and a small pinnacle.  With the exception of two small talus fields, this cross-country is all forested duff or good granite slabs.  From this saddle, contour to the saddle just east of Pt 10,776 and follow the ridge (all slabs) slowly descending to 10,400’ to a point just west of the lake in Crown Basin.  Don’t descend too soon to the lake as cliffs bar your way, instead of good slabs slightly further north.  The lake makes an excellent multi-night basecamp for multiple peaks or if continuing, it’s an easy hike to Portal Lake and Mt Reinstein.  Detailed map

John Muir Trail:  The JMT provides access to the Goddard Creek trail 3 miles past the Piute Pass Junction as the JMT heads into Evolution Valley.  Approximately 8 trail miles and 1 cross-country mile lands you at Martha Lake which sits below Reinstein Pass, a scant mile from the summit. The fastest way to access the JMT here is from the west at Florence Lake with the trailhead approximately 16 miles from the JMT and Goddard Creek junction.  The ferry shaves ~5 miles off making Martha Lake a difficult but possible goal for a one day hike in. 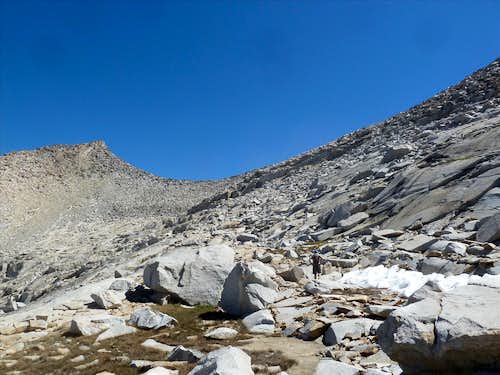 This mountain can be and has been climbed from virtually every direction.  The ridges tend to be blocky but enjoyable class 3 while the faces tend to be loose and sometimes sandy class 2.  The only exception to this rule may be the steep east face which overlooks the Goddard Creek area.  None of the routes are very long or arduous.


Mt Reinstein straddles Kings Canyon National Park and the John Muir Wilderness within the Sierra National Forest. No permits are required for day trips but overnight trips require one throughout the year. If approaching from the west during summer months, permits can picked up at the High Sierra Visitor Information Station on Kaiser Pass Road (one mile before the split between Lake Edison and Florence Lake, open seasonally) and at the Dinkey Creek Ranger Station (just north of the junction of Dinkey Creek Rd and McKinley Grove Rd).  Permits can also be picked up at the High Sierra Ranger District office in Prather. Check the Sierra National Forest permit website for the most current information on permits, camping, food storage, and campfires. 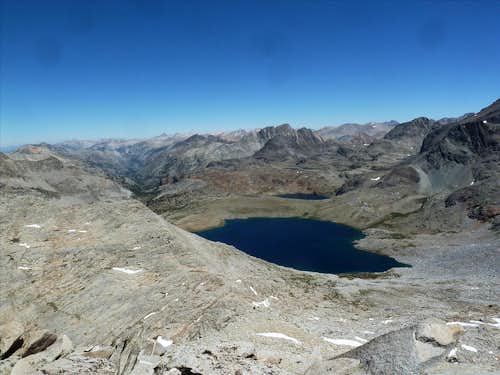 Martha Lake and Mt McGee from the summit of Mt Reinstein. (Jul '12)

Matthew Holliman's panorama from the summit

Climber.org Trip via the crosscountry route