Lying near the northern extreme of Sunol Regional Wilderness is a massif known as Maguire Peaks. Rising up to an elevation of just under 1700 feet, this mountain is by no means the highest in the region. In fact, it is nearly a thousand feet lower than the peaks of Mission Ridge which lay 3 to 4 miles to the southwest and more than 2,000 feet lower than the Alameda County highpoints of Discovery, Rose, and “Challenger” Peaks about 8 or 9 miles to the southeast. But the mountain is visible from many local viewpoints and it is easily recognized by its double summit and the precipitous rock bands  that encircle it at various elevations.
Despite its relatively low elevation, the views from the top are extraordinary. A surprisingly vast area of the eastern Bay Area can be seen to the north including the Livermore Valley and the Concord region- both areas dominated by massive Mount Diablo. To the northwest, distant Mount Tamalpais is seen as well as parts of San Francisco. I was surprised to see the tops of the Coyote Hills and part of the San Francisco Bay itself beyond the top of the Mission Grade to the west. Far below is the town of Sunol and the nearby water treatment ponds as well as San Antonio Reservoir. Looking in southerly directions, the view isn't quite as extensive due to the close proximity of higher ridges and peaks. That, however, doesn't diminish the quality of the view. A great perspective can be had of the peaks of Mission Ridge to the southwest: Mission Peak, Mount Allison, and Monument Peak. To the southeast the distant highpoints of Alameda County are visible as well as the higher ridges of Sunol Regional Wilderness. Well to the south is Loma Prieta and the Sierra Azul.

Other distinguishing features of this mountain are its relative isolation and rugged 'mountain-like' appearance. This is not merely a couple of bumps along a high ridge. This mountain stands alone and reigns over several well defined ridges that tend to radiate away from its double summit. Many of these ridges are characterized by tiers of rocky cliff bands that can be somewhat challenging- especially for those attempting the mountain from the east.

Despite its appearance of having twin summits, there is a significant difference in elevation between the two peaks. The higher western summit rises a good 40 feet or more above the eastern summit. Both peaks rise about 120 to 140 feet above the saddle that separates them. Maguire Peaks has a respectable prominence of about 500 feet and is included in the CC list of peaks.

Maguire Peaks is encircled by a very scenic trail called the Maguire Peaks Loop Trail. This trail- about 3.1 miles in length- accesses all of the several routes to the summits of the peak. Reaching the Maguire Peaks Loop Trail (MPLT) is trivial from any one of the 3 trails that start from Welch Creek Road.
For comparison purposes, here is a list of the different approaches (see map). The distances and elevations cited assume that one is climbing the higher west peak via the popular use trail up the SW ridge (see “Routes” below), but there are countless other alternatives that could lengthen or shorten your climb.

This seems to be the shortest and most popular route.

A low ridge lying between Welch Creek Road and the MPLT must be crossed both on the approach and on the return.

A higher starting point, but the same low ridge lying between Welch Creek Road and the MPLT must be crossed both on the approach and on the return.

Hiking from the main park headquarters is much longer, but very scenic and enjoyable.

A high ridge between park headquarters and Welch Creek Road must be crossed both on the approach and on the return. These crossings are in addition to the ridge crossings described in the Maguire Peaks Trail above.

There are any number of routes to the summits of Maguire Peaks.  All of them start from somewhere along Maguire Peaks Loop Trail and they range in difficulty from class 1 use trails to steep grassy slopes with a possibility of rock scrambles here and there- perhaps up to class 5.
SW Ridge: The easiest route to the higher west summit seems to be a use trail that starts on the north side of the southwest ridge from the Maguire Peaks Loop Trail (see map). Follow the MPLT west and then north as it crosses over the SW ridge of the peak. North of the ridge, it veers to the east and widens significantly. Look for the start of the trail at the SE side of the widened section (see photo). This trail is clearly visible in satellite views of the peak.

NW Ridge: Another well defined use trail appears to ascend the north side of this ridge to its crest and then follows the latter to the peak. This use trail starts about 0.7 miles along the MPLT beyond the start of the SW Ridge route and is also quite visible in the satellite view. 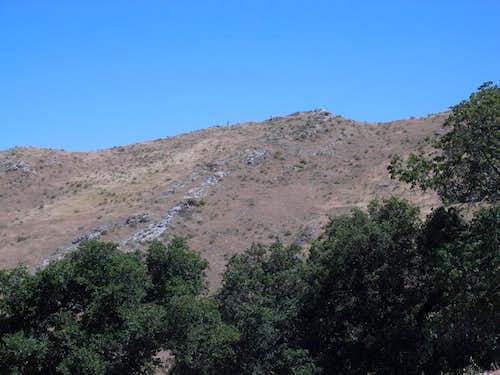 A couple of hikers on the northwest ridge.
SE Ridge: There are several routes up to the east summit as well. Those who follow the SE ridge will encounter several false summits and a few cliff bands. Most of the cliffs are class 3 scrambles. All can be bypassed if desired- usually to the south, but not without a certain amount of steep sidehilling through steep grass and brush.
Summit to Summit: Traversing the saddle from one summit to the other is fairly straight forward except for a steep east facing cliff band on the west peak just above the saddle.  This has been reported to be an easy class 3 scramble. (Thank you, Bob Burd.) 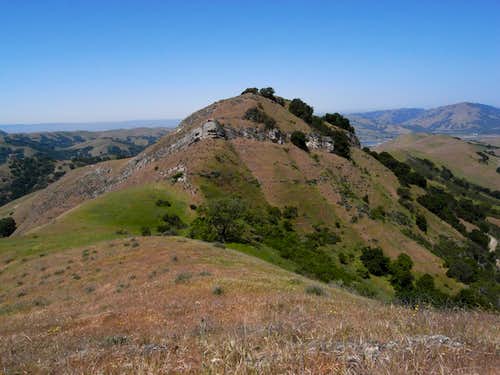 Looking at the higher west summit from the east summit.

Winter and spring are always choice times to hike in the hills of Northern California. Temperatures are usually mild and comfortable for hiking. The grass is short and easy to walk through without picking up those annoying burrs and stickers that like to stick to exposed hiking socks.
And then there are those spring flowers... !

A permit is required for parking at any of the trailheads along Welch Creek Road. Permits are obtainable at the entrance kiosk or the Visitors Center in the main part of the park at the end of Geary Road. There is no fee charged for these permits.
A per vehicle fee of $5.00 is charged for all park visitors.
More info can be obtained here: Sunol Regional Wilderness

Camping is not allowed in the vicinity of Maguire Peaks. Sunol Regional Wilderness has family campgrounds near the park headquarters, but they are presently closed until further notice- probably until 2017- due to the Calaveras Dam Replacement Project.

Maguire Peaks is named for an Irish farmer named Peter Maguire who settled in the region during the 1870s. (Alameda County Place Names by Page Mosier and Dan Mosier)

A couple of fine trip reports complete with excellent pictures; well worth checking out:


Many thanks to Bob Burd for some important route information and also for some very helpful suggestions regarding this page.