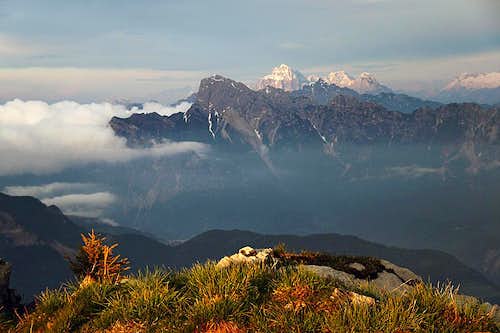 Evening view from Monte Tamai towards the east

Monte Tamai is the highest elevation in the small group which rises between Canale di San Pietro (valley of torrente But) on the east, Canale di Gorto (valley of torrente Degano) on the west and Sella Valcalda (pass) on the north. The mountain is however mostly unimportant, because nowadays it is completely degraded by ski lifts, reaching on the very top. Much more beautiful is its southern neighbour, Monte Arvenis, 1968 m, which is more rocky, but still reachable by marked paths. Unfortunately poor weather did not allow us to ascend Monte Arvenis. So, for now I propose we keep this page, but if in the future someone adds Monte Arvenis information, s/he can take over this page and retain only a few chapters about Monte Tamai, or can add a completely new sister page.

Most of the gentle hills around have its base made of early Triassic rocks (called Werfen period, 245-251 million years ago). Rocks are sedimentary and quite diverse. But the upper parts of mountains are made of a bit younger Serla dolomite (237-245 millions years old), which is very friable.

Mountains in the Arvenis group are mostly grassy and very easy to reach. The exceprion is Monte Arvenis itself. So, also Monte Tamai is a humble, less attractive mountain, which however offers very nice views around. In this middle part Carnic Alps are lower, not exceeding 2000 meters, so views can fly far. High mountains are seen mostly on the north, north-east and north-west, the most beautiful is the group around Monte Coglians / Hohe Warte. Towards the east, nice are the views on Monte Sernio and Julian Alps behind.

Monte Tamai has a strong north-nortwestern ridge, which rises from the nearby Zoncolan pass. From the summit of Monte Tamai, the main ridge of the group continues towards the south, on Monte Arvenis. Towards the east, a short side ridge descends on the nearby mountain pastures, and that completes the simple picture of our mountain.

Very characteristic for the Arvenis group are numerous alpine pastures. Some of them are still live, offering to tourists typical Carnic cuisine. Many such alpine meadows are also around Monte Tamai.

This is actually not a real mountain, but a humble bump on the northern ridge which descends from Monte Tamai towards Ravascletto. But it is far more known than Monte Tamai itself. Over Monte Zoncolan a nice mountain road goes, connecting Sutrio on the east and Ovaro on the east. For transit this road has no importance, because the parallel road which goes north of it over Sella Valcalda and Ravascletto goes over a much lower saddle and is faster. Over Monte Zoncolan goes a road which has primarilly a tourist character. It is nice and panoramic, extremely popular with moto bikers and cyclists and along it, on the eastern side, in witer there are nice ski terrains. So, the lower part of the road (on the east) is cleaned also in winter, the big parking place for skiers is on 1303 m. In summer, the whole mountain road is opened for public traffic. In some years this panoramic road has its hey days when the famous Giro d'Italia goes over Monte Zoncolan. That day thousands of spectators gather on the mountain, watching cyclist on the race.

For Monte Tamai almost the only starting point to hike up is Sella di Monte Zoncolan, the pass on the mountain road, 1730 m. For Monte Arvenis some other ends of mountain roads would also be suitable. In winter one can of course ascend the top of the mountain by ski lifts. Worth mentioning is also the cable way which goes on Monte Zoncolan (restaurant on 1740 m) from the north, from Ravascletto.

It belongs to the town of Ravascletto, noth of the mountain massif. From there, the cable way goes up on the Monte Zoncolan East ridge. It's nice for skiing, on the lower part of the ridge (near the road) there's also a cross country ski track. There's also a winter parking lot, 1303 m, and the lower station of the cable way system which goes up to Monte Tamai.

We don't need them to ascend Monte Tamai and Monte Arvenis. Near the road over Monte Zoncolan there are many restaurants and on alpine meadows they offer you in summer and autumn time typical products of Carnic cuisine.

Any time of a season. In winter the mountain can be reached by a ski lift, in summer by a short walk up. 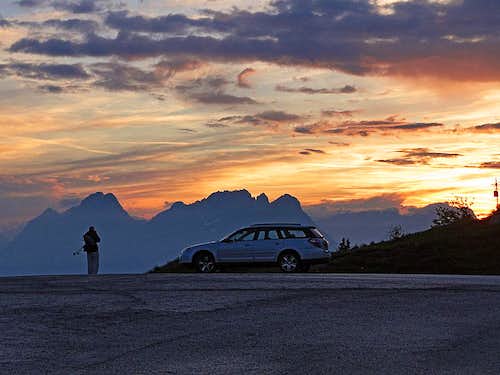