The views from the summit are excellent. A glorious view of Lake Tahoe awaits along with mountains surrounding it. Views to the north are obscured by forest.

The mountain is heavily forested with few views until the summit. It is ideal for trail running with many miles of trails in the vicinity without significant elevation increase or steep terrain.

In a typical year, Mount Watson can typically be accessed without any snow (beyond patches) starting in late June and going through late October. 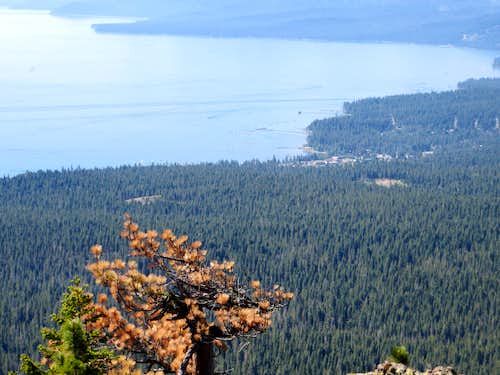 The primary routes to Mount Watson are situated along the Fibreboard Freeway. The best way to access it is at Brockway Summit, just past the Tahoe Rim Trail parking area on the west side of Highway 267 north of Kings Beach, California. From Fibreboard Freeway there are multiple hiking spots.  There is a round about way using dirt roads from North Tahoe High School, a couple miles east of Tahoe City.  But the principal routes are typically off of Fibreboard, and those are the routes described below.

If just wanting a short hike, take the Fibreboard Freeway all the way to the dirt to Mount Watson Road. It is then less than 3 miles round trip and 700’ to the summit.

You can also hike from Watson Lake, ½ mile of Fibreboard Freeway on a decent dirt road suitable typically for 2WD cars. From here take the Tahoe Rim Trail along the east side of the lake. It heads further east and then south to an offshoot trail on the side of Mount Watson. The total hiking distance is less than 3 miles one way, with an elevation gain of only about 700’. 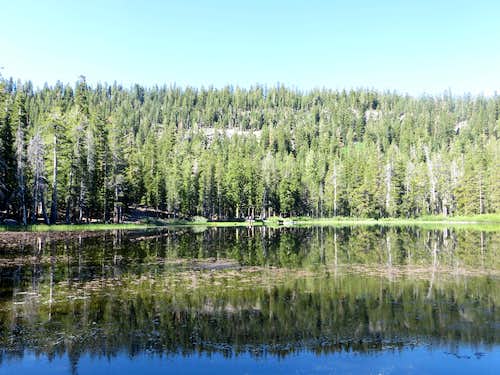 A longer route can be accessed off Fibreboard at the entry to Road 49(marked). Park here, about 4 miles from Highway 267. Hike south on Road 49 and you quickly reach the Tahoe Rim Trail. Head west on the TRT and you will end up at Watson Lake in about 2+ miles. There is a turnoff to Watson Lake, where if you head straight you are going the wrong direction. It isn’t marked. So take the trail heading left. Once at Watson Lake, follow directions described above. For this route you gain about 1,100’ in nearly 5 miles; so pretty gradual. Descend via Mount Watson Road and then back down the Fibreboard. Don’t go all the way back. You will see a slight use trail heading down to Fibreboard that lets you cut some distance, and do the entire loop in about 9 ½ miles.

During the summer season there is no red tape. There are no fees. The area is on U.S. Forest Service lands. Winter access may be difficult due to snow. This road is not maintained during the winter months to clear out snow.