Red Knob is located in the western half of the High Uintas Wilderness Area of Utah.  It is 14 miles west of Kings Peak, the state highpoint, and 12.7 miles east of the Mirror Lake Highway.

Uinta peaks are very colorful depending upon the time of day and angle viewed.  Most have either a red hue or a gold hue.  Red Knob is half and half.  Its southern half and higher summit is red while its lower and northernmost summit is golden. With the sun low on the horizon behind you, the colors are striking.  At midday, you can still see a tint, but it's much more subtle and at a quick glance everything looks grey. 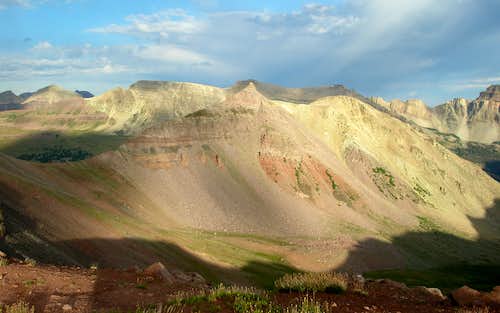 Red Knob in the morning 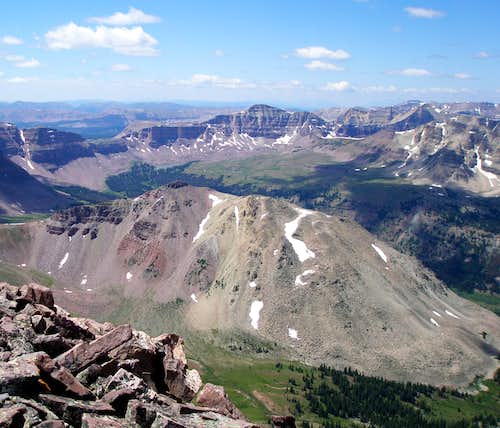 The peaks in the western half of the Wilderness area are the most rugged of the Uintas and many of them can be viewed from Red Knob's summit.  Red Knob itself is not particularly rugged except when compared to the gently rolling ridges of the eastern Uintas.  From the east at a distance, the final few feet to the summit look almost vertical, but the west side is considerably less steep. 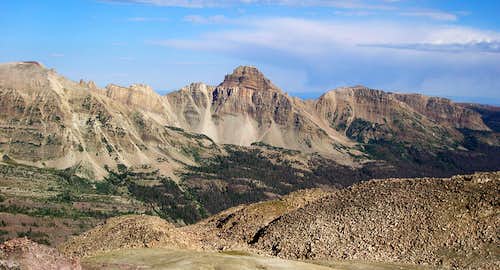 Red Knob is the 69th highest peak in Utah having over 300' of prominence and is 12,220' tall. It has an official name as do most of the 12000 footers in the western half of the High Uintas.  Most peaks in the eastern half, including many 13000 footers, do not.  This may be due in part to the western ones appearing more distinctive while many eastern ones are merely rounded lumps.

Red Knob sees few visitors, yet is an easy 1/3 mile side trip from the Highline Trail, the main east/west thoroughfare that travels the entire Uinta range.  The Highline Trail traverses the southwest face of Red Knob to the saddle between Red Knob and Peak 12248, unofficially known as "Red Knob Pass Peak".  This minor peak also has a red knob on top of it and is very similar in appearance to Red Knob. 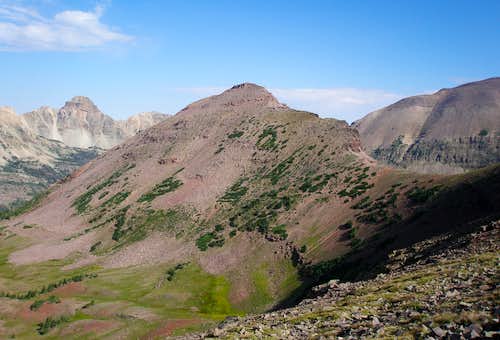 Red Knob and the Highline Trail 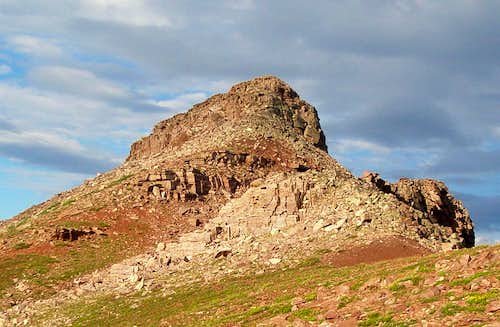 
If not coming from Salt Lake, find your way to Mountain View Wyoming and follow the directions from there.

If coming from Salt Lake, head east on I80 to Wyoming.  Once in Wyoming, take exit 34 towards Fort Bridger.  Go through Fort Bridger about 5.1 miles to a 4 way intersection with a blinking red light.  Turn right onto Wyoming State Route 414.  Go through the town of Mountain View where there is a 24 hour Maverick gas station and convenience store, a small ShopKo, a Pizza Hut, and a Subway.  At the south end of Mountain View, 3 miles from the blinking light, turn right onto Wyoming state route 410.  After 13 miles you will see a sign that says the pavement ends in 750 feet. Shortly you will see another sign for "Blacks Fork River Access Area" and then another one that says "Wasatch Nat'l Forest/Meeks Cabin 13". If you miss all the signs, don't worry, the three sets of rumble strips should wake you up. Do as the signs say and turn left. The road you turn onto starts out paved but soon changes to dirt. Follow the main road 23.6 miles to the signboard (just past a gate) for the East Fork Blacks Fork Trail. The trail start is just before the signboard. There is no parking right at the trail start. Instead, continue on the road for just a few feet and turn right and then left into the parking lot.

In the summer of 2013, the dirt road was in excellent shape to Meeks Cabin Reservoir.  Past the reservoir it was still good, but less so.  Past the Utah/Wyoming state line, it degraded a little more but was still fine.  Past the turn for the Mirror Lake Highway with about 5.5 miles to go to the trailhead, it got annoyingly bad with many rocks, both loose and embedded with most of the dirt washed away.  I had no problem with a Subaru Legacy (not Outback), but had to drive pretty slow. 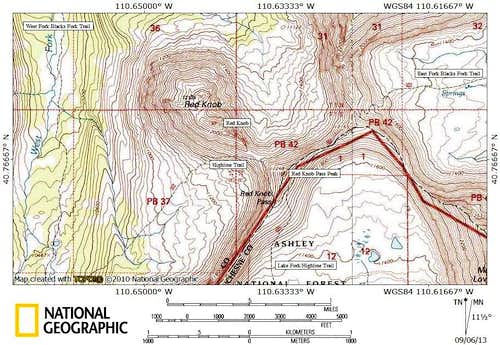 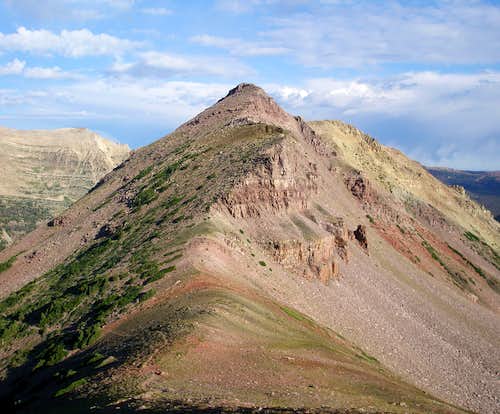 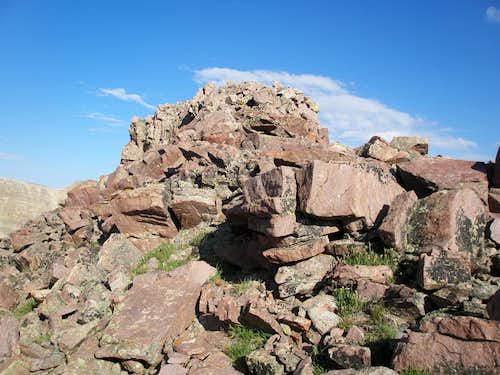 Red Knob is just a short 1/3 mile sidetrip from the Highline Trail, the major east/west Uinta thoroughfare.  From the pass between Red Knob and Peak 12248, just follow the ridge north to Red Knob.  It is straight forward class 2 over mostly stable boulders with a small amount of brush.  The elevation gain is 440' feet from the pass.  The east side of the ridge has some cliffs, but the west side is relatively easy terrain.

Normal wilderness area restrictions apply. Check the signboard at the trailhead for the most up-to-date information.  Do not camp within 200' of the trail or a water source. 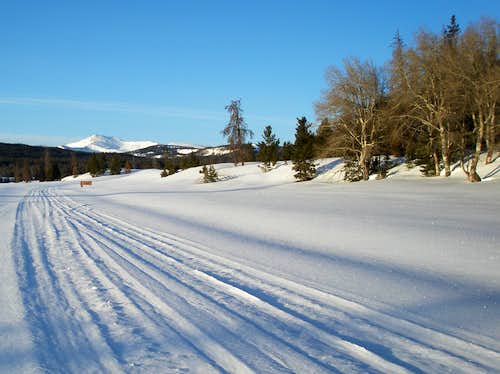 Winter ascents would be tough due to the access roads being unplowed.  For the East Fork Blacks Fork Trailhead, plowing stops at the north end of the Meeks Cabin Reservoir, over 11 miles away, where there is a parking lot but no restroom.  The road is then well snowmobiled and groomed to the turnoff for the Mirror Lake Highway.  From this point, in February 2013, we saw just a few snowmobile tracks heading in the direction of the trailhead, so I think it possible, but not 100% certain that you would find a track all of the way to the trailhead.

If you wanted to approach via the Mirror Lake Highway, the highway is not plowed between mile marker 15.6 (Soapstone Basin turnoff) and mile marker 48 (North Slope Road #058).  Both end points have parking and restrooms.

There is a campground just past the parking lot with about 10 sites.  It is free, but there is no water.  It is extremely unlikely that you would find it full as I've never seen more than a couple of sites occupied and several times it's been completely empty.

There are numerous places to camp near the trail but remember that you need to be 200' away from the trail and any water source.  Be warned that you might encounter sheep in the grassy meadows so it is best to camp above them.