This significant summit, with 1,241 feet of prominence, is neatly tucked in between several boundaries and forms the headwaters of Sloan Creek. The mountain is relatively moderately sloped with most angles under 35 degrees. The final 1,000' is open meadows on the South and easy class 2 rock on the North with evidence of past glaciation and a few permanent snowfields. There is a trail that snakes its way to the summit from a junction with Pilot Ridge. The view from atop is a fantastic triple volcano stunner in fair weather and makes a great finish to anyone either staying at the Blue Lakes or traversing the Pilot Ridge Trail.

A benchmark on the summit notes placement in 1945. On the Western highpoint a flat area with four bent rods, cable, pieces of wood and scattered, weathered glass shards denotes an old lookout. Pilot Ridge shoots off of the western flank of the mountain while Big Blue Lake sits 0.6 miles away at its Southern base.

From Granite Falls - head East on the Mountain Loop Highway 37.3 miles (over and past Barlow Pass) until you reach North Fork Sauk NF 49 and Take a right. Rest is the Same as from Darrington 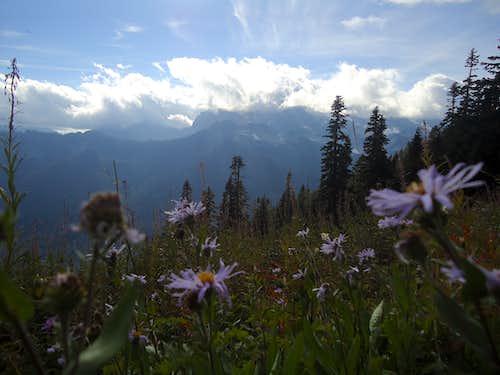 Looking at Goblin and Kyes shrouded in clouds from a field of daisies. Taken on the way down from Johnson approaching Curry Gap 9-8-2013. 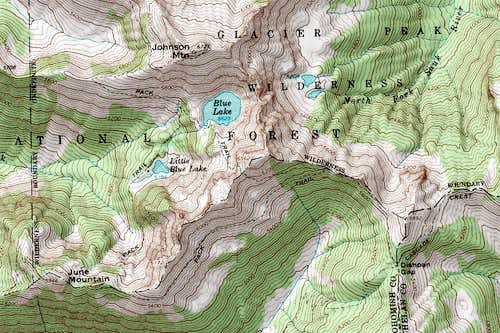 Map of Johnson Mountain. Many trails junction around it.

Ice-ax and crampons in early season. Rain gear for wet weather or when meadows are dewy as trails can be overgrown since they are generally not maintained. In late season water sources are limited to the Blue Lakes and only a select few streams with several miles inbetween. Fill up when you can. 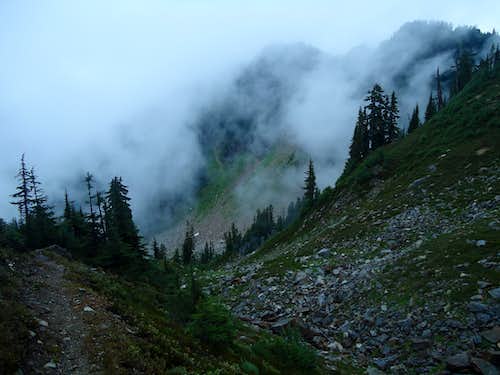 Taken on 8-31-2013 by Cyohma on the way to Little Blue Lake. It rained all day that day which seemed unusual to me for the time of year.

A Northwest Forest Pass is required to park at either trailhead. Keep the management happy... 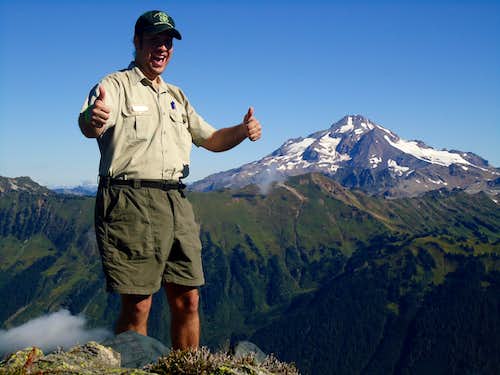 by following the rules

Spring through Autumn. Winter ascents are possible but access may be limited if either Jack Pass or North Fork Sauk Road are closed. Visit Northwest Avalanche Center for snow conditions in early season.

Camp only in designated camping sites.