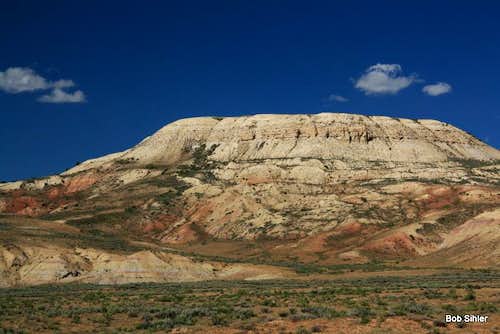 When you look up at Fossil Butte, you are actually looking at the bed of an ancient lake that around 50 million years ago was home to a thriving subtropical ecosystem.  Eons of uplifting and climatological changes later, you get what you see today-- a flat-topped formation in a semi-desert setting.
The cliffs on Fossil Butte hold some of the world's best fossils from the Paleogene period.  Among the thousands of fossils found there, many of them intact and with great detail, have been fish, bats, crocodiles, turtles, and even an early horse.  One long cliff on the formation's south side is known as Fish Cliff because of all the piscine fossils that have been uncovered there.
Not the highest point in Fossil Butte National Monument, Fossil Butte is probably the most visually spectacular, and it dominates the scenery from most locations in the park.  Reaching the top involves anything from Class 2 hiking up steep, loose scree to Class 3 scrambling on some very treacherous "rock" (often more like dried, crumbly mud).
Views from the top stretch into Idaho and Utah, on clear days even taking in the Uintas, Utah's highest mountain range.  Closer at hand are rolling hills and plains that characterize much of southwestern Wyoming.  The exposed slopes of Fossil Butte and nearby formations can become very colorful early and late in the day.
Disturbing or removing fossils within the monument is strictly illegal and can results in heavy fines or even criminal prosecution!  If you find any fossils, please only take photographs and either report them to park staff or leave them "undiscovered" where they are. 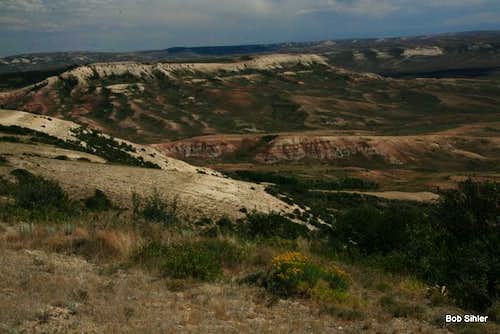 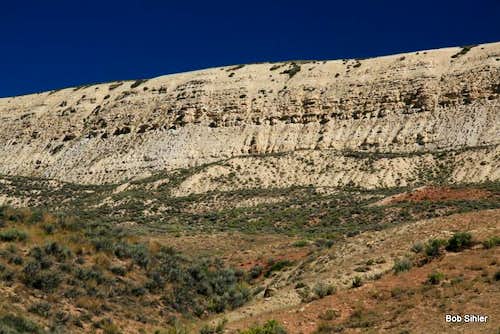 The entrance to the national monument is about 10 miles west of Kemmerer off U.S. 30.  After leaving the highway, drive under railroad tracks and soon bear left (west).  Watch for the signed access road to the historic quarry.  If you end up bearing north again and seeing the visitor center, you have gone too far. 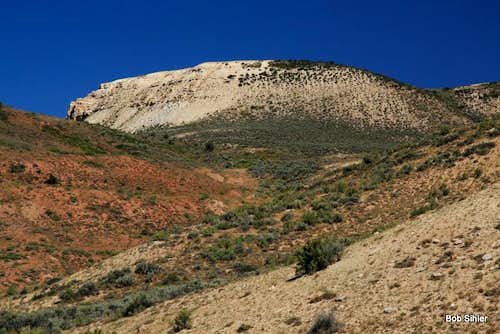 Seen from near the Historic Quarry TH

The Historic Quarry Trail is a 2.5-mile loop (rated as strenuous by NPS but really more like moderate for most people) with a spur to the quarry itself (the spur was closed for repair work in August 2013, and I am not sure when it is supposed to reopen).  There are interpretive signs along the way and good views of Fossil Butte. 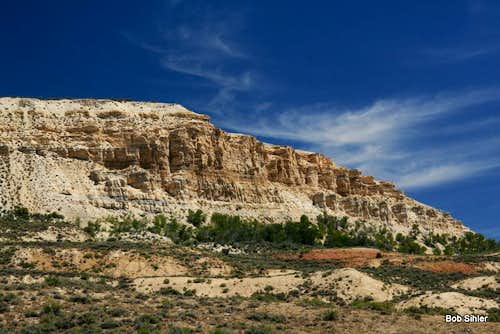 Seen from Historic Quarry Trail
Once the trail begins to roughly parallel the butte, find a way up that looks suitable.  Although it is under 400 vertical feet to the plateau above, the distance is short and very steep and covers really loose scree and easily broken rock.  The easiest way up may be from shortly east of the spur to the quarry.  There is a steep gully dropping to the desert floor there, and a game trail appears higher up in the gully.  Still, though, the going is very steep and the footing is treacherous.  This way was my descent route; for my ascent, I went up through the cliffs after leaving the trail a short distance east of an abandoned homestead along the trail. 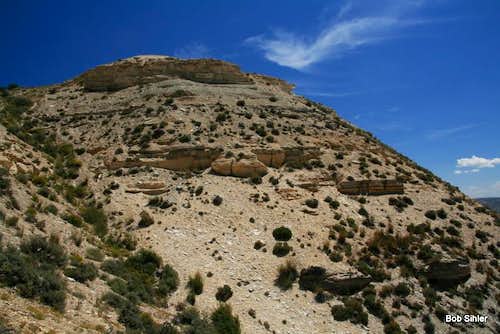 This was my descent route.
Once you reach the summit plateau, it is easy hiking west and then north to the actual highpoint. 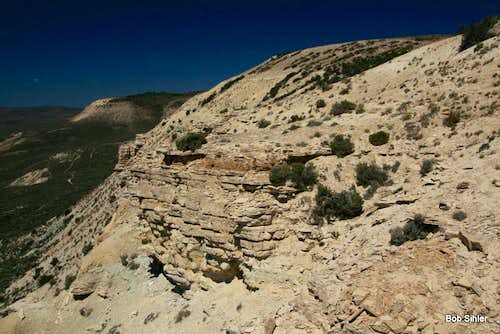 Longer cross-country routes are possible from the west side of the butte.
From the parking area, elevation gain is about 900'.  RT distance is 4-5 miles.

All year.  Note that temperatures can be very hot in summer and bitterly cold in winter.