McGinty Mountain is a chaparral covered mountain in the small town of Jamul east of San Diego. McGinty Mountain is interesting not in the sense that it is very high or vigorous, but that it affords the hiker amazing 360 degree views of San Diego County stretching from Mexico to the south, Cuyamaca Peak and the Lagunas to the east, Pacific Ocean to the west, and Palomar Mountain to the north. The small amount of effort needed for the views from the summit make this peak a worthwhile destination in addition to being on the San Diego County 100 Peaks List. Also of note is the relative obscurity of the peak. You won't see the crowds typical of Cowles Mountain, Iron Mountain, or Mount Woodson. 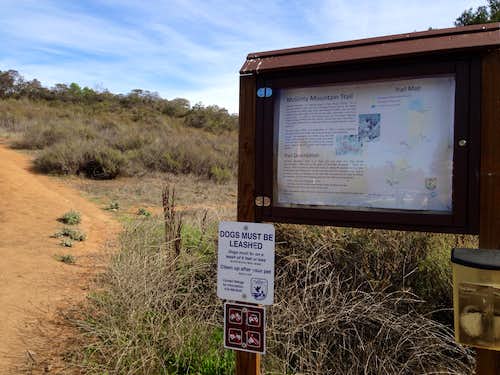 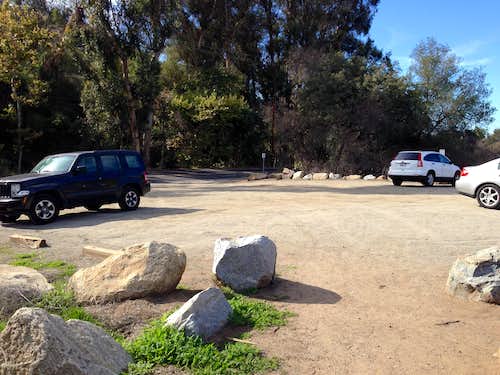 Fairly straightforward, the hike to the summit is about 2.25 miles and involves about 1,400 feet of gain. The trail switchbacks up the first hill after the trailhead several times, fairly steeply in spots.  Stay left when you see a flat sandy area and follow the trail to the top of the first ridge.  The trail is a bit overgrown here but opens up at the top of the ridge. 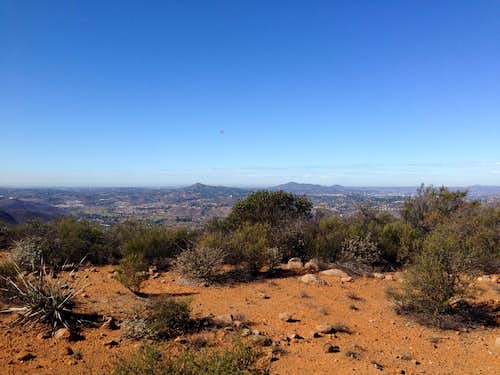 view along the trail west to the Pacific Ocean
Once this ridge is crested the trail undulates for a short while, passing near a few private homes in the process. When the trail forks along this flattish section, stick to the lower, right hand side trail.  The left fork is more of a use trail and peters out into the bushes.

Follow the trail and lose a bit of elevation before climbing up to the final saddle where the summit again comes into view again.  Two short but steep climbs later head left off the main trail to the summit rocks.
The trail is steep and slippery in places, especially on the upper part of the mountain, so watch your footing! 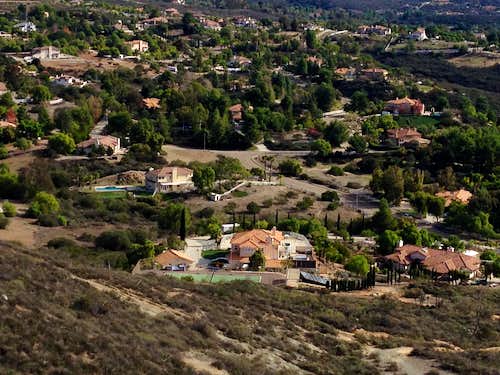 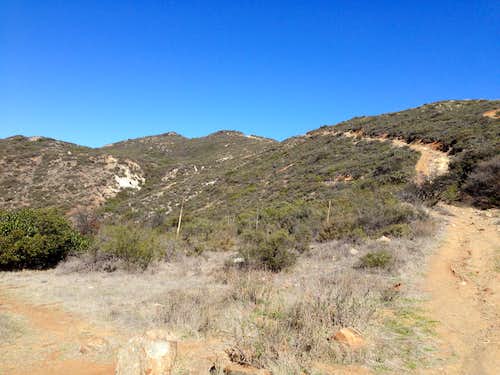 Fall, winter, spring, or summer. Preferably early and on a cool day. Attempting this hike in the summer should be reserved for masochists and the criminally insane. It can easily reach 100 degrees out in east county even when it is comfortable closer to the coast. Bring lots of water.

Interesting bit about the plant ecology on McGinty Mountain per Trails.com
~ Rising like a scruffy whaleback above a sea of luxury homes, McGinty Mountain hosts a rich but circumspect treasure of botanical oddities. Several rare and endangered plant species make their home here on soils derived from a relatively uncommon form of bedrock called gabbro. More than half of California’s remaining specimens of Dehesa beargrass cling to the mountain’s rocky spine. The endemic San Diego thornmint, its habitat reduced by 90 percent due to urbanization over the last century, survives here, as does San Miguel savory, Perry’s tetracoccus, and Gander’s butterweed. Some of these plants are believed to be relict species, once common but now almost squeezed out of existence by gradual climate changes occurring over the past 10,000 years or more.~