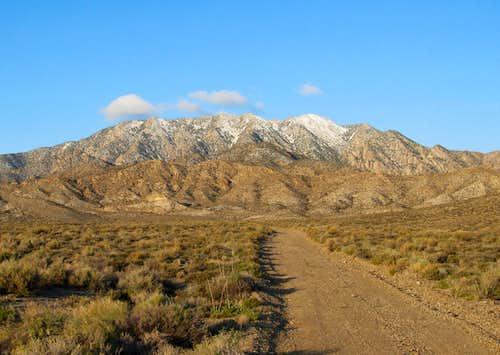 Lone Mountain, 9108 feet high,  is a beautiful mountain located just west of Tonopah Nevada. With a prominence of just over 3800 feet, it is the 29th most prominent mountain in the whole state. Located not far from highway US 6/95, it is a mountain that dominates the view as you look to the south as you near Tonopah and is sought after by those who chase prominence peaks.

The town of Tonopah is one with historical significance in Nevada's history and is still a key crossroads for those traveling from Las Vegas to Reno.  The history of Nevada is rich in mining towns and Tonopah was one of the towns that owed its existence to mining.  This little bit of history comes from the  Wikipedia's article on Tonopah and I'd suggest that you might want to read the full article:

"The community began circa 1900 with the discovery of gold and silver-rich ore by prospector Jim Butler when he went looking for a lost burro he owned. The burro had wandered off during the night and sought shelter near a rock outcropping. When Butler discovered the animal the next morning, he picked up a rock to throw at the beast, but instead noticed the rock was unusually heavy. He had stumbled upon the second-richest silver strike in Nevada history."

From Tonopah, drive easterly on Hwy 95 about 11 miles(from Chevron station) to virtual milepost 47.1 and turn off south on an unsigned gravel road. If you get to the rest area you have gone too far. There is a cattle guard to cross and head directly towards Lone Mtn. The road to where we parked was 8.5 miles from US 6 (near MP 47) but the last mile or two was very rough and slow going. We parked at 6840' and you could camp at where we parked (fire ring present). I'd only consider high clearance and 4WD recommended for the last two miles as one rock shelf is encountered in the road that a passenger vehicle wouldn't get past. If not so equipped, you'll add several miles to your effort.

From where we parked at 6800, we hiked down the road and then got into the wash (drainage) that is at the bottom of Springdale Canyon. We followed this drainage most of the way to the summit. It is easy hiking along the drainage although some bushwhacking was unavoidable in a few spots. Once the drainage steepens, there are a series of short dry waterfalls from about 7900-8100 ft. It might help to have a couple waypoints in the drainage as others have gotten into the wrong canyon.

At about 8200-8300 ft, we left the drainage and got onto the steep slope on the left side of the drainage.The slope up to Lone Mtn from the drainage doesn't have trees and while steep, it was fairly easy hiking than it was in the drainage. The slope eventually topped out and led over to the true summit, about 200 feet south from where we hit the top of the slope. There were a couple rock shelters, the southerly one contained an ammo can that held a register and I found a witness benchmark nearby. Another witness benchmark was a couple hundred feet north which seemed a bit odd but perhaps it was to make it clear that the real summit was still to the south.

We noted that others in the register had stated that  they had come up the SW ridge so that might be a route worth looking into if you are interested in climbing this mountain.

Mileage to summit was about 2 miles with 2400' of elevation gain. The steep slope after we left the drainage

Since all of the area is on BLM land, I'm not aware of any red tape.  For addresses and additional BLM information, check this LINK

Actually, depending on the snow situation, it is probably possible to climb this mountain any season of the year.  Thunderstorms and severe weather is possible at any time of the year so it is wise to check with the weather forecasts before venturing into this area.  Rain could make the  roads impassable and it is a good idea to let others know of your plans.

There had been a register placed prior to the one placed in 1987 by Gordon MacLeod and Barbara Lilley but it evidently was in bad shape when the two from Simi Valley California made their visit and left a newer one.
Since their visit, I noted quite a few entries which included familiar names like John Vitz, Barbara Sheets, Donna O, Bob Sumner, Dan Palmer, Bob Packard, Andy Martin, Mark Nichols, Richard Joseph, Dennis Poulin, & John Ide. Then Ken and I signed in and later the same year Adam Helman, Richard Carey and Bill Peters. That is kind of a who's who of prominence peakbaggers although a few of the earlier ones were bagging range highpoints.

Car camping is possible at many locations near the mountain as camping is permitted on BLM land as long as you observe the leave no trace ethics. A fire ring was found near where we parked and we ourselves had car camped about 3 miles off of the pavement. Tonopah has several motels that you could use and I personally have spent several nights over the years there. If you're in the mood, consider staying at the Clown Motel, a friendly place where even clowns are welcome.

Peakbagger listing of those who have climbed this mountain: LINK
Brad Boester found a different route to the summit: LINK
Richard Carey and his climb:  LINK

Also for gas, food and accomodations, Tonopah is a great source to utilize.  There isn't much else in this part of Nevada so be sure to make sure you have a full tank of gas and are stocked up on water and food.  Cell coverage is spotty and often non-existant outside of Tonopah itself.