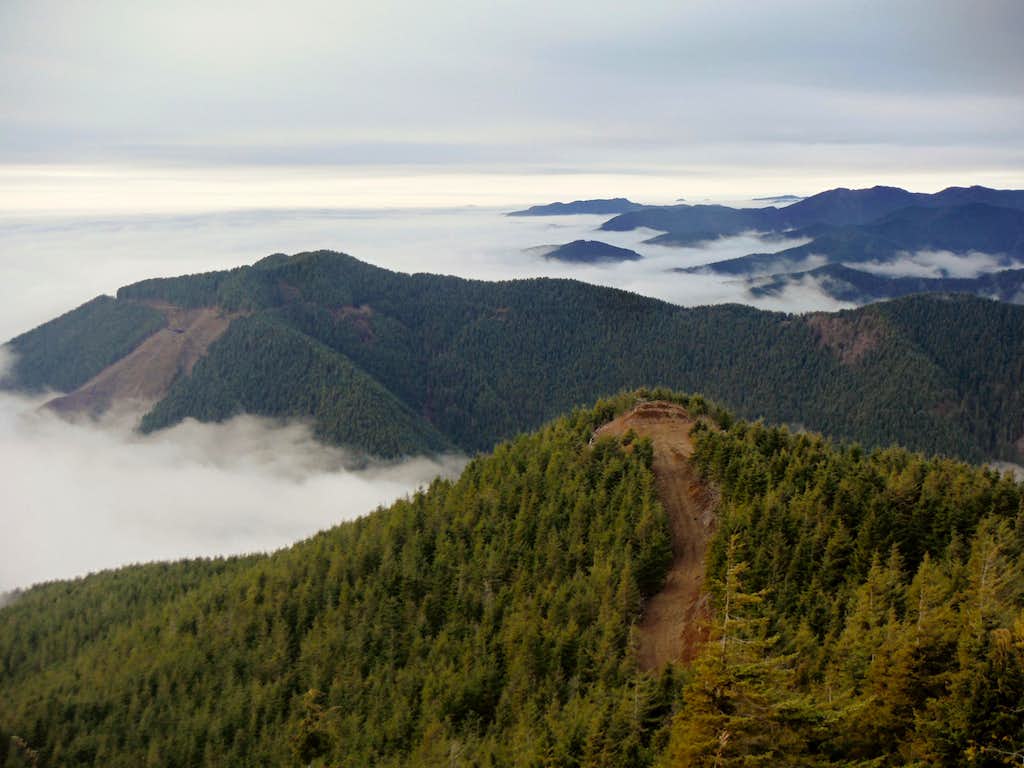 Almost ideal. However there was no snow when I was up there.

South Mountain located as one of the southern Olympics is a moderately well known winter hiking destination. This peak has good prominence at over 1600 feet of prominence. The mountain also has even better views from the top, especially in winter when there typically is an inversion layer below and Rainier and the other volcanoes become visible. There is also an excellent view of the Olympics to the north from this vantage point. Mount Ellnior and Washington really stand out from this summit as well as many others in the region. There are also some views through the clear-cuts from logging on the mountain though these views maybe much less desirable due to the foreground of clearcuts. It should be noted that there is a sign stating that the radioactive frequency exceeds the FCC levels on the summit. If you do go to summit keep that in mind.  For many people this is considered a safer peak to go when avalanche danger is higher than normal. South Mountain is full of logging roads and though occasional rocks and snow may roll onto these roads the chances of a large avalanche happening on a 3000 foot forested peak though entirely possible (I have had some friends who have survived such events) are still rare. 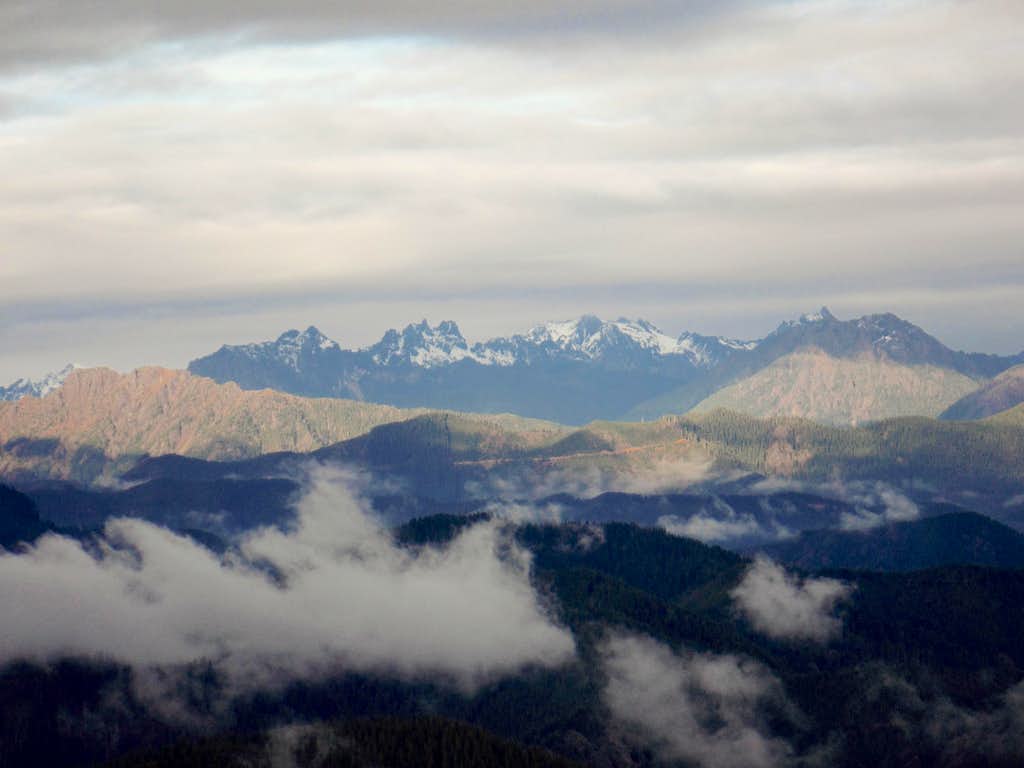 Looking into the heart of the Olympics

As with many of the other smaller mountains in the region this summit is currently occupied by radio towers with many of its sub-summits to the east being occupied by cell towers. This summit area is currently owed by Green Diamond which in 2014 is going to start charging a fee to all hikers in hunters who plan on using their property. How this will affect the popularity of South Mountain no one will ever know. Another issue with this mountain is the random opening and closing of the roads in this area. While some people have been able to get a straight shot to South Mountain, my party ran into a number of roads that are closed which caused us to do an alternate route up the mountain I am going to try to give you all the options on this page so that this way you have a backup route in case the primary route is blocked off for some reason. 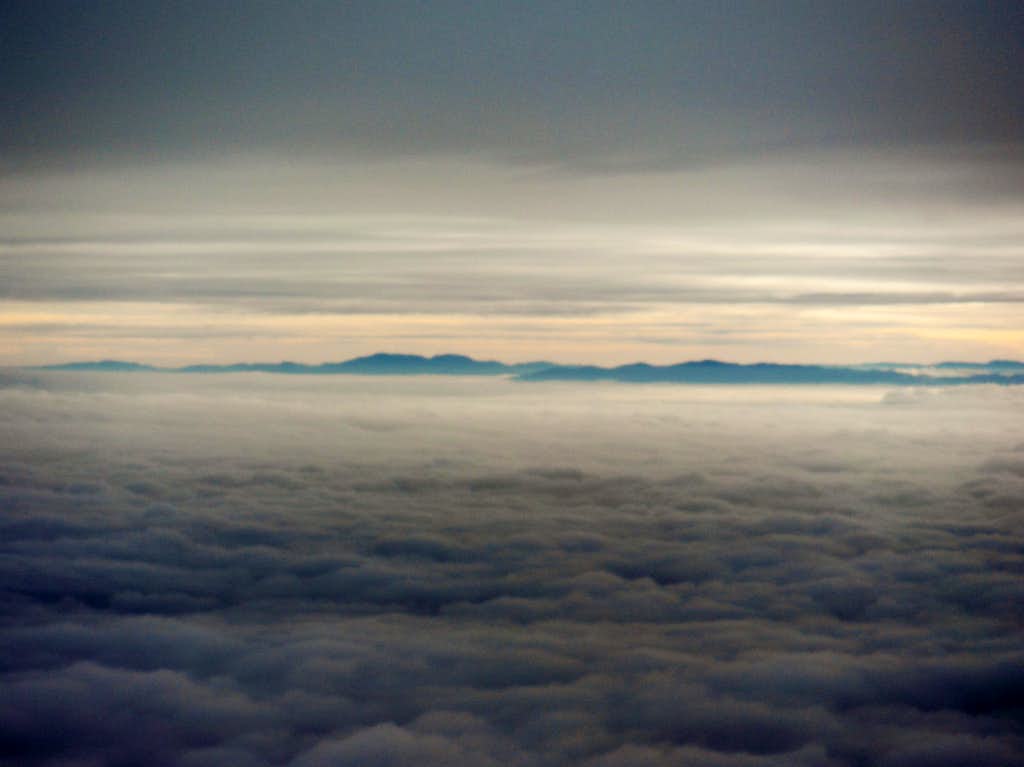 Looking over the inversion layer

Once you get there though the whole way up is by steep well developed logging road and gravel roads. For this reason I would recommend doing this peak in winter when the peak has some snow-cover. Without the snow-cover this peak is missing a lot of desire that many other peaks in the Olympics have unless you have desire walking up long slogs. Most of the quality views are from the very top. 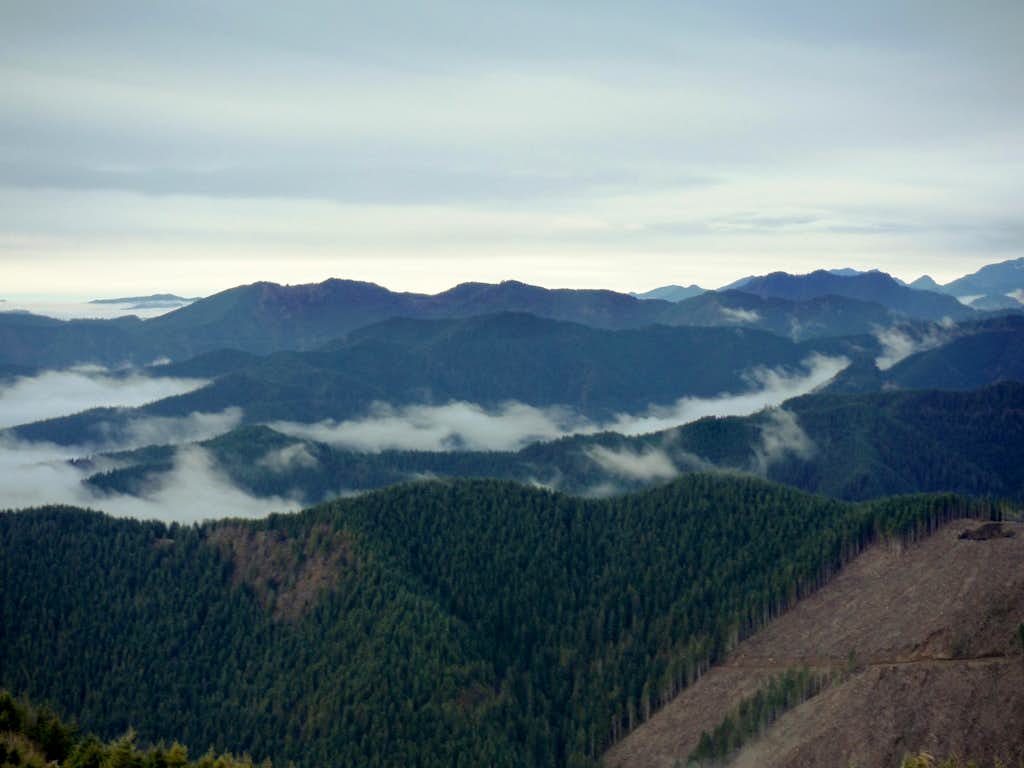 Before I write about the directions it should be noted that the opening and closing of many of these roads are subject to change at any time. Well I was going for the summit of this peak I experienced that, so it is very important that one has the directions to all the pull outs before head up these mountains and climbing them.

VIA THE MOST COMMON ROUTE UP SOUTH MOUNTAIN: From Shelton, Washington take the Shelton-Matlock Road for roughly 11 miles to the village of Matlock. Once in Matlock make a right on Beeville Road. About three miles up the road you want veer left on to the West Beeville Loop Road. Stay on West Beeville Loop Road until you reach Kelly Hall Road 2.5 miles on your right hand side. Make there and take that 2.0 miles to a four way intersection. Once you hit that four way intersection you want to make a right. It should be noted that this gated was blocked at the time I was up there and will be from time to time. If you get lucky here drive roughly 4 miles down the road to the second forest road on your left.

THE WAY WE WENT TO THE TOP OF SOUTH MOUNTAIN: From Shelton, Washington take the Shelton-Matlock Road for 9 miles and then look for an unnamed but well established logging road on the right hand side. At roughly 500 feet you want to make a left on the road. From that unnamed road you want to take it 4.7 miles all the way to base of a couple smaller mountain. There should be a road on the left hand side. It should be noted that this gated was blocked at the time I was up there and will be from time to time. If the road is not gated then make a left there and continue 3 miles and the road to the summit will be on your right. 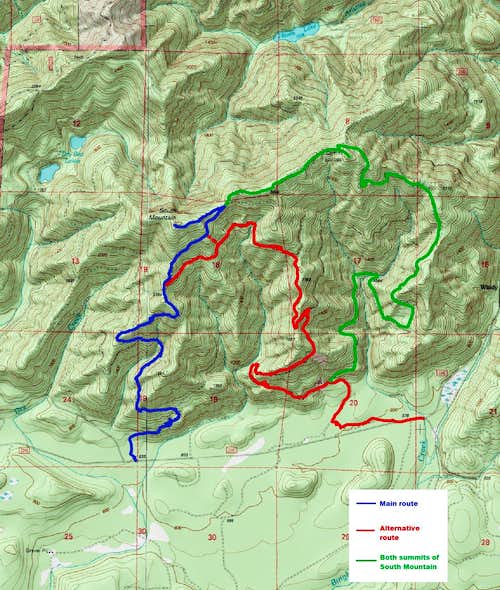 Map of the Routes
There are many different routes to this summit and all of them involve using logging roads. The best way to describe all of these route is by a map. Routes can very by 8 to 14 miles round-trip and elevation gain from range from 2300 to 3000 feet depending on where you are coming from. These are all basic Class 1 road walks and don't require any bit in the way of scrambling. To get to the true top will require a bit of a steep slope. It should be noted that you will risk radiation from the tower above you so if you do head up there stay there a very short time.
Blue Route = 4 miles one way
Red Route  = 5.3 miles one way
Green Route = 7 miles one way 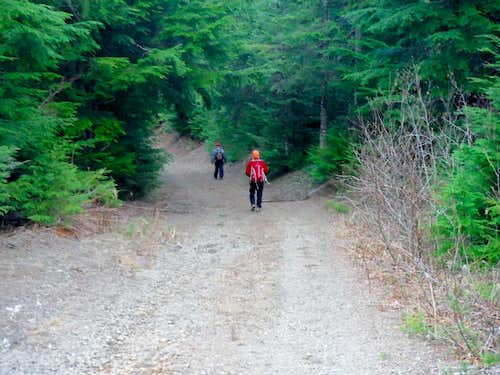 Typical logging roads in the area

Before 2014 hiking here was free. Unfortunately as a growing trend amongst many of the forestry companies in the region Green Diamond is now requiring a permit to hike there. Here is a link to the permit.

South Mountain can be hiked at any time. However of personal taste I would not make this a summertime destination because there are a lot of much more desirable mountains just north that have shorter trails. Save this one in winter when there is an inversion layer. You will be glad you did. Also check the snowline. Sometimes in winter you will need snowshoes whereas other times you will not need any snowshoes.

This is Private property therefore there is no camping on the logging roads heading up the mountain. For more information about camping on or by South Mountain check out the Green Diamond Rules and Regulations. According to that site you can camp on Green Diamond property for free provided you send a 7 day letter with a copy of your permit and tell them where you will be. This is subject for approval. Personally this mountain is not a very long hike and I would not have much desire to stay overnight anywhere.

Yet another winter trip report.