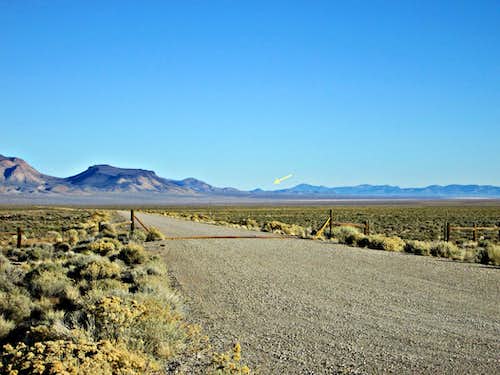 Moody Peak, located in the Pancake mountain range, is a peak I'd never want to repeat if I have a choice in the matter. It is a long way from paved roads and very isolated as a result. Few people other than local ranchers or hunters ever make the effort to get to the base of this mountain and the last 700 feet of it is downright nasty thanks to the vegetation that protects the summit.

So why put up a page here on summitpost for it you might ask? It is only because of prominence that I was attracted and intrigued by this mountain. With a prominence of almost 2100', it comes in at #150 on the Nevada list of peaks with over 2000' of prominence. The information contained within this page will save you a ton of work trying to research this one as other than this summitpost page and what is now posted at peakbagger.com, there is no information to be found about this peak elsewhere at the present time. We found this to be the one of the least visited peaks we've done in Nevada with only Ray Benchmark near Cherry Creek even less visited.

I had been looking at trying to find my way up this mountain for several years and the only information I had on it was a short note to me from John Vitz, one of whom I consider to be a real pioneer in doing Nevada prominence peaks (along with Gordon MacLeod and Barbara Lilley). John visited the peak in 2005 and up until 2013, he was the last person to visit the summit as verified by the entry found in the register on the summit's top. His only comment to me (via email)  on the route he chose was he went in via Moody Spring and went up the east side from an old mining location known as the Collins Hotel. It is such an isolated peak, that my point is that very little was known to the peakbagging community about it and I was a bit surprised when I saw that Brad Boester had made a visit in May of 2013 and approached it from the northwest. If this page helps the few that may follow us, please let me know of your experience(s) so I can add it to this page and continue to try and improve what little information there is about this one.

When looking at a map of Nevada, there are several "blank" areas that are not serviced by any paved roads. One of the most intimidating to those who haven't done much off pavement driving is where Moody Peak is located. Bordered on the north by US 50 and on the south by US 6, the only roads that get close are all dirt roads.

From the south: US 6 from Tonopah or Ely.

Dennis Poulin and I approached the peak from US 6 and I've reproduced the information of our drive in below. 4WD was not necessary at any point although high clearance was a must in several spots. Road conditions could change and rain would make some of the roads impassable so weather conditions is a huge key in taking the roads we utilized.

The following worked for us: (mileage not exact, trust your waypoints)

Brad Boeser offers this information that will get you in the ballpark for choosing a north approach.

"From Eureka, NV (be sure to fuel up) head east on Hwy 50 for 10 miles to the signed "Duckwater/Currant" road, just past milemarker EU47. Head south on this paved road for 7.8 miles and take the right fork gravel road(signed Hicks Summit). In 3/10ths of a mile take a left fork, the right fork heads to the Fish Creek Ranch, in another 3/10ths mile take the left fork onto a south heading gravel/dirt road, the right fork heads to Ninemile Peak eastside approaches." He then goes on to describe how he got to the spot he used for his trailhead for his northwest approach.

We came to this same junction from our waypoint #5 (above) and I'd strongly suggest you study the topo maps and Benchmark map book to get you to that point if you choose to do the Moody Spring approach.

Using the above directions I've provided from US 5, we found our way to Moody Spring which was the way John Vitz did this peak. From there we followed horse trails up the drainage for a couple miles. On the map you will see the name "Collins Hotel". We found no Marriot or Motel 6, just some ruins of what appeared to be a log structure. One of the pics I've included shows Dennis sitting at the site. We did see a grassy area near the remains of the structure and a jeep road leads right to this spot. A big tent was
pitched when we were there although we saw no one. Most likely hunters are there on weekends.

From near the Collins Hotel area, we headed up through the vegetation to the summit. If you have pink ribbons, it'd be a good idea to mark your way to make your descent easier. The brush was some of the worst Dennis and I have encountered on a Nevada peak.Its about 700 hundred feet of brush and wasn't fun. The summit has a benchmark, two witness markers and a glass jar register that was found in a small cairn near the central benchmark.


Notes: On the drive in, we saw at least 5 herds of wild horses. Wild horses visited us at Moody Spring as well and made some trails for us to use. As mentioned earlier, we did see a jeep road up near the Collins Hotel and a serious student of maps may find a way to save some elevation gain and a couple miles (four miles both ways) of hiking. We were summit visitors 3 and 4 in the past 8 years and when you include one other person who did it this year, the last visitor was in 2005. (John Vitz)

Dennis Poulin has put up the GPS track from our hike on peakbagger and if you are aware how to utilize the track, it'll give you the way we ascended and descended.

Everytime I climb a Nevada peak it seems I realize that very few others do the same thing. The register we found on the summit only had two names in it and it was placed in 2005 by John Vitz. His register stood 8 years before another signed in and that was Brad Boester in 2013. Dennis and I signed in after his name a few months later in October. 4 people in 8 years, a lonely summit indeed.

I found that  the others that followed us (peakbagger and lists of John) were peakbaggers Bob Packard, Richard Carey and Adam Helman  in 2014.    Greg Jagielski and Shasta (John H.) also climbed this peak in 2014 but I'm not sure about Shasta's visit date although he wasn't signed in the register when Dennis and I were there. He is noted as visiting the summit in the lists of John description.  The climbers who sign the lists of John register won't show up for you unless you are a member (20 bucks a year).

As far as I know, there is no red tape to deal with and more information about the area might be obtainable from the BLM office in Elko Nevada.
You can email the Elko District at elfoweb@blm.gov or call at (775) 753-0200.


When to Climb / Weather

Weather is the main consideration and due to the roads being either gravel or dirt, avoid the area in poor weather. Snow is likely during the late fall, winter or early spring and thunderstorms are frequent in the spring, summer and early fall. Do not travel into this area without adequate vehicles and be sure to gas up in Tonopah, Ely, or Eureka before venturing into the area. Let others know of your travel plans and if possible, have a second vehicle as part of your effort. I offer this information as a service and cannot guarantee that you will find the same conditions. Once more, this is a remote mountain area, plan accordingly and be safe.

Weather for Eureka Nevada, the nearest town of any size:

Car camping is possible at many locations and a good car camp would be suggested at Moody Spring if you use that approach. There are no organized campgrounds nearby and motels are available in Eureka, Austin, Tonopah and Ely.

Note:  consider combining this one with Rawhide Peak or 9 Mile Mountain.