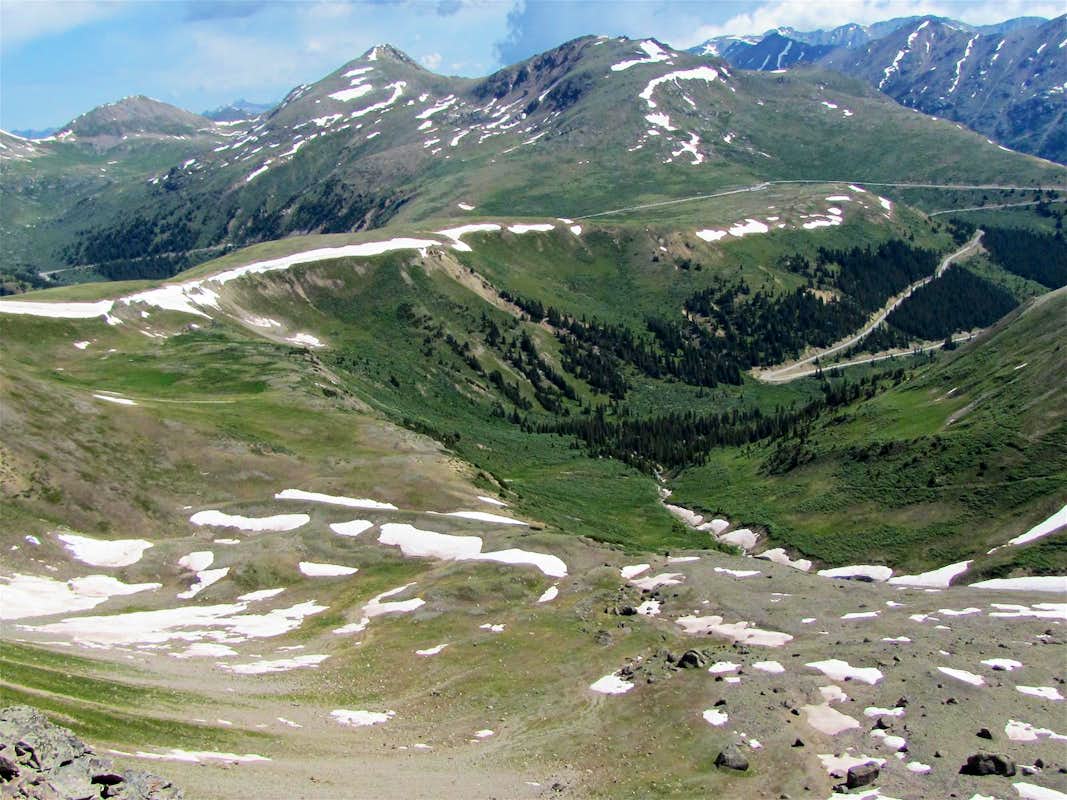 South face, Peak 13500 ft in the center of the picture rising above Independence Pass. Twining Peak to the left.


Peak 13500 ft rises to the north of the 12095 ft Independence Pass on Route 82 in the Sawatch Mountains of central Colorado. It sits on the Continental Divide to the southeast of Twining Peak. From Independence Pass, you can reach the summit of Peak 13500 ft in 60-90 minutes making this an ideal hike for those who wish to quickly acclimatize. Fantastic views make the short one mile hike well worth the effort.

From Leadville: Head south on Route 24. Travel just under 15 miles south until you reach Route 82. Make a right and head west on Route 82 (Road closes in Winter). Follow Route 82 for 18 miles as it winds up into the mountains until you reach Independence Pass. There is a parking lot on the left (south side of the road) as well as plenty of room to park along either side of the road leading up to and beyond the parking lot.

From Aspen: Head east on East Main Street (Route 82). The road begins to climb into the mountains. 4 miles outside of Aspen are the gates where the road closes in winter. Here you will enter the White River National Forest. 15 miles further and you will reach Independence Pass. There is a parking lot on the right (south side of the road). Plenty of room is also available on the north side of the road to park. Find the pond on the north side of the road. The slopes of Peak 13500 ft can be seen to the north of the pond. Go to the east side of the pond. An unmarked trail will appear going up the southern slopes of Peak 13500 ft. Follow the trail up the mostly grassy slopes. The trail may disappear at times but the route is obvious. Head north uphill.


Colorado's highest and second highest peaks (Mt. Elbert & Mt. Massive) will be visible from the summit The road to Independence Pass, CO 82 closes in the winter time.

Best time to hike would be summer although you should be on the lookout for afternoon storms as the trail is completely exposed. Spring and fall hikes would also be enjoyable but you can expect to encounter snow into late spring and as early as September.

The Independence Pass section of Route 82 is closed in winter (November-May, depending on the amount of snow).

There are a number of campsites located along Route 82 between Twin Lakes and Aspen. Check out the "Camping Information" link below for a map of campsites.