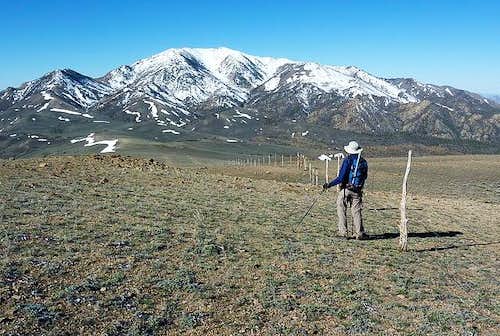 So as you can see, Shoshone Mountain sits in the "shadow" so to speak of its bigger sibling just to the north and receives relatively few visitors with the exception of the ones who are truly into chasing the prominence peaks of Nevada. In looking at the register and also the resources provided by peakbagger.com and lists of John, and Bob Burd's trip report of his visit, probably less than 15-16 people have been to the summit of this one since 1987 yet that is a fraction of those who visit nearby Mount Jefferson's south summit.

This mountain is part of the Toquima range and as mentioned above, just south of the more well known Mount Jefferson which is the highest mountain in the range. Other notable peaks found in the range are Spanish Peak (10,746 ft), and Shoshone Mountain (10,907 ft). In the northern section of the range are Wildcat Peak and White Rock Mountain (10,156 ft). If I had the time, I could easily spend a week in this area just climbing these mountains. Akso nearby is Table Mountain across Monitor Valley, another p2k prominence peak.

If you are also interested in Mount Jefferson, than Bob Burd's trip report is a really helpful tool in helping you get both Jefferson and Shoshone on the same trip. He has included a great map of his route and many helpful pictures, a few of which I am using in this summitpost effort (with his permission of course). As far as the history of this mountain, I haven't been able to find much although it is interesting to note that there is a North Shoshone mountain about 80 miles to the north near Austin Nevada.

From Tonopah, roughly four hours north of Las Vegas on US-95. Be sure to top off the gas and get supplies here because this is the last gas!

From Tonopah, proceed east on US-6 about six miles to NV-376. Turn left (north) and continue about 13 miles to the Belmont/Monitor Valley Road, which heads northeast. This road is paved but could use some maintainance. Roughly 25 miles later, the road leads to the interesting ghost town of Belmont, set in the southern foothills of the Toquimas. Belmont used to be the Nye county seat and a major mining community. Today it is home to about a dozen people, including one place offering a Bed & Breakfast. For mining and historical enthusiasts, many of the old buildings are still standing and there is interest in restoring the old court house. However, there are no services as such in Belmont except for one "saloon". The pavement ends in Belmont.

Staying on the main road (now called Monitor Valley Road), leave Belmont and head north another 5 miles or so on a wide, good dirt road. Turn left onto the Meadow Canyon Road (38.6305 116.8116 elev 7050) and proceed west into the range. Although the road was reasonably well graded, it is narrow (beware of oncoming cars and there are many blind corners so don't speed) and be mindful of possible small washouts and big potholes along the way. If you are interested in the way Ken and I approached the mountain, watch for Antone Creek Road, about 6 miles up from the Monitor Valley road turnoff and turn left. If you want to go to Mount Jefferson and the northern approach, don't turn left, continue on up the road as it makes its way up to Jefferson summit (see "getting there" directions found on the Mount Jefferson page).

When you turn left on the Antone Creek road (38.6747 116.8966 elev 7770), crossing the creek several times as it heads up towards Barcelona summit, road at our visit was decent until it passed an old mine (around 1.5 miles) and from that point on it began to degenerate and get rougher and we found high clearance necessary and we  found it necessary to use  4WD in a couple spots. The next two miles were the crux of the road driving and seemed to be used mainly by ATV's. It still worked to get us to our goal, a saddle near sub peak 9235 where we car camped for the night(38.6569 116.9456 elev 9050). The actual Barcelona Summit is still a mile further along the road but you don't want to go that far. The value of starting our hike from that saddle, was it gave us a direct line right to the summit, which was 1800' above us and less than 2 miles away. I've included a map of our route from the saddle to the summit which you will find in the route section.

From the north: You can approach the mountain by coming in from US 50 via the Monitor Valley road. It is a lot of dirt road driving to do so but you can check out the information I've provided for the approach to Wildcat Peak and continue driving further south to where you find the turnoff for this one. 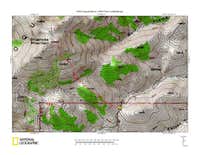 From the saddle where we parked, it was a relatively straight shot to the summit. From the saddle, head straight up a short road initially and then work cross country up towards point 9750. After a short loss of elevation to a saddle at about the 9700' level, pick a way up the steep terrain towards point 10355. We found some use trails on the way back down that would have helped a bit on the way up. Ken Jones posted our GPS track at peakbagger and the line that is to the left was the best route. When you get up near the summit, you will find yourself on a plateau like area with several spots that seem to vie for the highest spot honors. We found the highest spot to be the southeast summit and in a small cairn, a register bottle was waiting to be found and the register, placed in 1987, to be signed.

The register that we found was placed in 1987 by Gordon MacLeod and Barbara Lilley. We found a few other signatures in it such as Andy Zdon in 1988 and in 2003  John Vitz and Barbara Sheets signed it,=.  A big gap occurred until Brad Boester signed it in 2011 but I know that others such as Bob Burd (see his report) and Bill Peters had been up there but had not found the register. We signed it in August 2013 and also summiting that year were Scott Kruis, Bob Sumner and Dennis Poulin. In 2014 Richard Carey, Adam Helman and Bob Packard signed in.  According to Lists of John,  Mark Adrian signed in on May 22nd, 2015 and also indicated that Bob Burd's visit was in May of 2010.  I don't know who 'A Bit" is but he was also on the Lists of John log for July 2011.  Still, this summit rarely sees visitors and the above names are generally known as a who's who of prominence peakbaggers.  If I'd been interested in prominence peaks back when I did South Jefferson,  I most likely would've done it then rather that making the trip back in 2013 to claim this one.

Ken Jones used his surveying device to determine for sure that the southeast summit where we found the register and the remains of a wooden tripod structure was the highest spot but we still went over to the western summit to make sure he was correct. When he sighted back to the southeastern summit from the western one, he found it to be a few feet higher.

Please let me know if you've also climbed this one and post your route so that others might have that information.

This peak might be climbable at any season of the year but due to the high probability of snow at its high elevation, winter might not be a great time to make a visit to this area. Rain could turn some of the roads to be impassable at any time of the year so pay attention to the weather in this area. 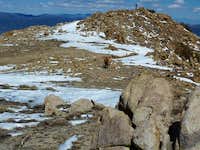 There is one campground in the area that i know about:
Pine Creek Campground. The link really has a lot of good information about how to
find your way to it

For even more information on prominence, check out this website.

All have summitpost pages