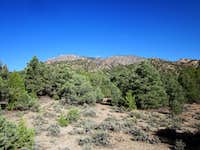 From near our Trailhead


Of all the mountains I've visited in Nevada, this one has very little information about it available. It can join it's fellow mountains of Moody, Bald(Lander county) and Blue Eagle as moutains that it is difficult to find out anything about. On this one, I have found no information about this one than even the ones mentioned above. I've googled, checked books and anything else I can think of and I come up with nothing. So the best way to find out anything is to go there, which I did. The reason for my interest is that this mountain has good prominence and is one of the top 100 prominence peaks in the state coming in at #87.

As you travel between Ely and Tonopah on US 6, mountains are what you will notice more than anything else. With lofty peaks like Currant Peak, Troy Peak, Morey Peak, Rawhide peak to name a few to look at during your drive, one that will not be overly noticed is one just to the north of US 6, about 65 miles from Ely or 100 miles from Tonopah and that is Portuguese Mountain. It is the highest one in the interestingly named Pancake range, a range that runs north and south for close to 90 miles and includes Moody Peak to the north, another of Nevadas prominence peaks. Portuguese Mountain is rarely visited by peakbaggers with just 4 or 5 visitors in the 20 years between 1989 and 2009. After 2010, there have been 6 more of us (5 in 2013 alone). The register found on the summit was placed by MacLeod and Lilley in 1989. The next to sign in was John Vitz and Barbara Sheets in 2000. Lonely, very lonely.

Turn north onto the dirt road (do not take in wet weather)and drive 2.75 miles to a junction and take the lesser road that heads north. Waypoint is 38.6441 115.7096. This road gets a bit rough and high clearance is recommended. You want to aim for Little Ike Springs on the topo and drive as close as you can get. When we were there, the road was washed out in several places and we had to get creative with our driving route. We were able to drive 8.5 miles from the last junction but you may find it tough to get that close depending on the condition of the road. There was one spot where Dennis had to rescue my truck when I went into a big washout that required a tow strap to get me out of. Go as far as you feel OK with but don't push your luck. It is possible that the roads might be repaired when you visit but don't count on it. Be prepared to make a longer hike out of this one. Most likely you can get to within 3 miles of where we were able to get but that will add an additional 6 miles to your hike so just be aware of that possibility.


Although the map shows a jeep track all the way to Little Ike Springs, we were stopped a good mile short of that as the jeep road disappeared due to a washed out section that continued for a considerable distance. So our trailhead (GPS 38.7247 115.8052) became the point where we could drive no further. Once at our trailhead, we had a nice hike towards Little Ike Spring but I'd suggest you check out the GPS track posted by Dennis at peakbagger . com for the best feel for the way we went. His GPS track details our route nicely and in the early going, avoid Little Ike Spring by taking the northerly portion as shown on the GPS track. Much of the climb was on horse trails. We used a nice drainage to go from the trailhead to a small ridge to the east of point 7667. Then we crossed a saddle and climbed a steep rocky slope up to point 8310. Then it was mostly following more horse trails around the north side of the ridge to the summit.

Dennis stated this in his trip report: "When we reached the summit we got our first glimpse toward the west and we were not happy. There was a huge thunderstorm about 5 miles west and was heading our way. We didn't stay on the summit long because of the storm. We made a quick trip down and fortunately the storm moved southeast and missed us. However, another storm was on the summit by the time we got to our trucks. That storm chased us out of the canyon and back to Hwy 6. We felt lucky to have tagged Portuguese this day." 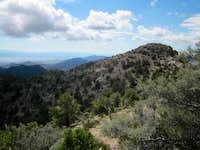 
Note: Greg Jagielski found a route that went up the SW ridge from Martin spring. A study of maps might make you aware of this other possibility in getting to the top of this mountain.

The mountain is on BLM land and anyone interested in getting more information about the land use of this area would be advised to contact one of the BLM offices in either Ely, Elko or Battle Mountain. There is also one in Tonopah.

This mountain might be doable anytime of the year but most likely winter would probably see snow to deal with. Avoid the area during rain or thunderstorms as we saw evidence of flash flooding just prior to our visit and the roads were washed out in several spots.

There isn't a campground in the immediate area but car camping is allowed by the BLM if you use "Leave no trace" ethics. We car camped just north of US 6 on a nice flat spot off the dirt track that leads into the southern area of Portuguese Mountain.

With a thunderstorm heading our way, we managed to take some pictures of the views we had from the summit. 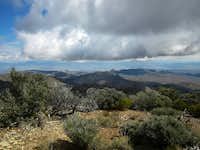 The summit log was placed in 1989 by Gordon MacLeod and Barbara Lilly. Then eleven years went by before John Vitz and Barbara Sheets signed in. Another ten years passed before Bob Sumner signed the register in 2010. So, thats 5 people in twenty one years. John Ide visited in September of 2013 and Dennis and I were but eleven days later. Two weeks after us, the Henney's made the trip to get this summit and Greg Jagielski was the lone visitor in 2014. 2015 has seen 6 more. Also worth noting, shasta (John) is shown as climbing this one on lists of John but no date is listed. So up until 2010 we had 5 (maybe 6) but since 2013 another 12 have been to the top of this one. Normally I would have a photo log of the summit register but my camera was lost with all of its pics on Blue Eagle mountain the next day. I would hope that someone reading this commentary would take the time to take pictures and be so kind as to add them to this summitpost page or to email them to me so I can do it.
Thanks in advance.

Picture credit and a warning about the area

I took a lot of pictures during my hike of this mountain but they were all lost the next day when I lost my camera on Blue Eagle mountain. All the pictures utilized here were taken by Dennis Poulin and used with his permission. Many thanks to Dennis for not only letting me use his pictures but for pulling my truck out of a washout I "stumbled" into.

Warning: This is an extremely isolated area and chances are good you won't see another person in the area so plan accordingly. Make sure you have plenty of fuel, plenty of water and plenty of common sense. Cell phone coverage is not available although we did get a signal near the petroleum company facility on US 6, a few miles from the turnoff. It is a long way from services in Ely or Tonopah and ideally it would be great if you had two vehicles when you attempt this one. Conditions of the road can change from season to season and do not attempt this one in rainy or snow conditions. The roads can be impassable or wash out. Let others know where you will be going and when you plan to be back. Attempt this one at your own risk.

Wild Horse country: This means that in the spring you need to be aware of the presence of ticks and be vigilant and watchful for them.

Nearby interesting places to visit.

If coming from Ely, you pass through Currant Nevada, a place where nothing much is going on. Here's a link or two:
Link
U Tube link

Oil production. The most prolific oil production is found just off of US 6 not that far from the turnoff to Portuguese mountain. For more information, click here.

Lunar Crater Byway About 25 miles west of our turnoff Link