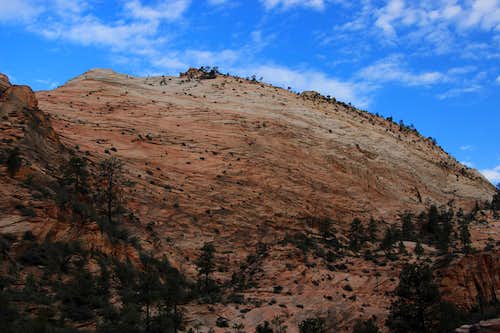 Progeny Peak
Of the officially and unofficially named peaks on Zion's east side, Progeny Peak and South Ariel Peak are the shortest objectives, both coming in at under a mile from car to summit. South Ariel is more challenging and is more aesthetically impressive, but Progeny has more of a wilderness feel to it. Because South Ariel rises directly north of the road through Zion's east side, the road is always visible as one climbs the peak, and it is visible from the summit as well. Although the road is visible from Progeny's summit and from parts of the route as well, there are times it is not, and Progeny is set farther back from the road than South Ariel is. Actually, climbers in good shape might enjoy doing both of these peaks in a single morning or afternoon.
The peak's name is a local one, not an official one, and there is a story behind the naming. Since I do not know if the people involved would want their names included, I will leave their names out. But here is the short story:
A local professional photographer wanted to name an arch on the peak "Progeny Arch" because of its resemblance to the arch on nearby Bridge Mountain. Upon learning that the arch already had a local name-- Two Pines Arch-- he and two other climbers decided to attach "Progeny" to the peak instead. And there you have it. I'd argue that's a better name than "Two Pines Arch Peak" would have been. 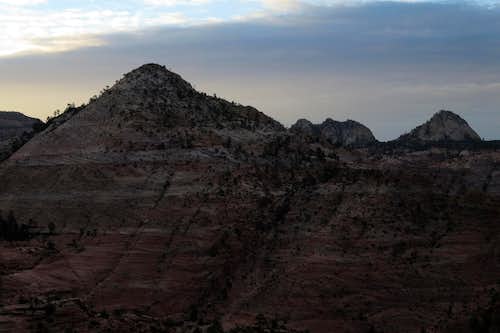 Progeny Peak from Deertrap Mountain
Progeny Peak is among the obscure peaks on the east side of the park.  Because only one peak east of the Zion-Mt. Carmel Tunnel and not considered part of the Zion Canyon group-- Checkerboard Mesa-- has a name on USGS maps, and because there are only two officially maintained trails originating out there-- Tunnel Overlook and East Rim-- the east side is Zion's flyover country, so to speak; the majority of visitors are people on their way to or from Zion Canyon, and they do little more but stop and wander a few yards from the roadside to take some pictures.  Thus, the east side, with its many unnamed peaks and its numerous washes and canyons, is a haven for scramblers and explorers who delight in isolation and secret wonders.  In addition to all the peaks, there are several small slot canyons of varying difficulty levels, including Keyhole Canyon, a dark, very narrow technical slot. 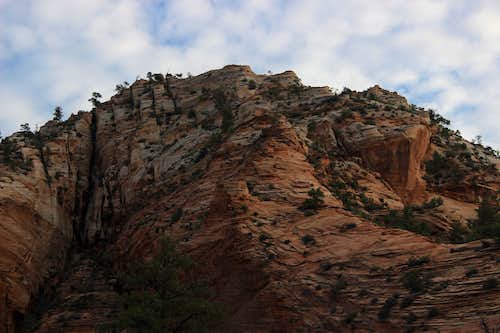 From Zion Canyon, drive the switchbacks up to and through the Zion-Mt. Carmel Tunnel. After exiting the tunnel, reset your trip meter or note the odometer reading. Just 0.4 mi after the tunnel, on the left is a pullout (accommodates maybe three cars) above an obvious sandy wash (Upper Pine Creek). Park here or at another pullout, also on the left, just beyond the wash; the second pullout is closer to the start of the route. If you go through a second tunnel, you've gone too far.
If you are coming from the east, you'll find these parking areas about a mile past a short tunnel. If you reach the overflow parking for the Canyon Overlook Trail, you've gone too far.
Go early or late. After 8 A.M., traffic control for the tunnel begins, and it's one-way traffic every time an oversized vehicle (RV) has to come through.

The route to the summit is maybe 0.75 mi.  Elevation gain is about 1000'. The difficulty needs not exceed Class 3.
Make a quick drop into the wash immediately east of Upper Pine Creek. Be careful not to get into the wrong wash. If you see this view or turn to look back in the direction of the road and see a tunnel under it, you are in the wrong wash (Upper Pine Creek).
Below is the view you want to see at the start: 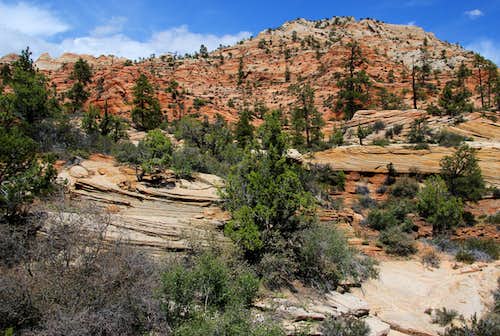 Progeny Peak
I've read a route description talking about a 5.6 route on the peak (actually, mostly a scramble with one short 5.6 pitch), but it seems that you have to go out seeking it. I've also read about a fork in the wash about 100 yards from the start and needing to take the less-prominent right fork, but I found myself in the correct wash without noticing any major forks around 100 yards.
Basically, follow the obvious watercourse heading north/northeast to the peak, ascending two short dry waterfalls (might be wet after rain or during snowmelt season). After the second waterfall, look high and right on the mountainside for Two Pines Arch. Actually, you can see it earlier if you know where to look it, but it becomes much more apparent after the second waterfall.
Scramble up to the arch and check it out. Then scramble up ledges and outcrops to the left of it, eventually reaching easier ground before veering right up more ledges and another watercourse to the summit ridge.

Soon the summit comes into view. Head on up and enjoy the great views. 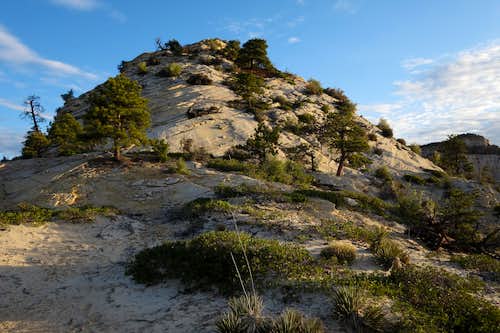 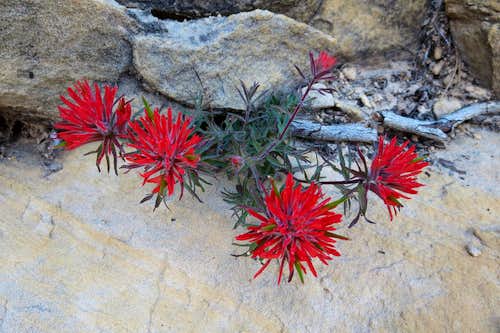